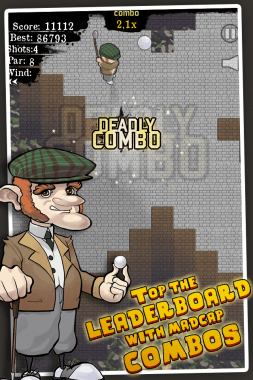 Ayopa Games announced their latest addition to their game catalog today. Developed in Finland by Mobilive indie developers, Death Golf is a deadly new twist on the traditional sport beloved by many. Players will have to combine their precision golf skills and twitchy platformer abilities to dodge blood hungry predators and traps that are a lot more deadly than a little patch of sand on the green. The game is filled with 35 levels, power ups, point boosting combos, upgradable gear, achievements, and Game Center leader boards. No word on the exact release date, but Death Golf will be released for iOS devices. Check out the trailer below.