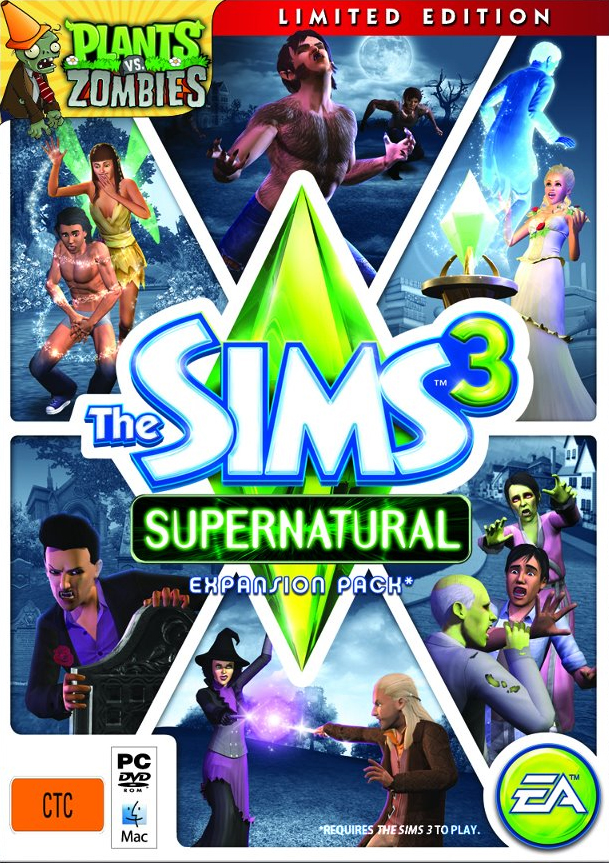 About a month ago us here at Capsule Computers were invited to the super secret EA office in Sydney to preview the upcoming expansion pack for The Sims 3, The Sims 3 Supernatural Expansion Pack. This expansion pack adds a bunch of new gameplay dynamics and options to the ever customisable Sims universe. Whilst a lot of the additions are superficial, many of them also directly affect the gameplay of the game, mixing things up and creating a new way for the player to interact with their Sims.

For those of you who have never heard of The Sims, it is essentially a franchise of games that allows players to construct various artificially intelligent people and have them interact in a virtual world. This means getting them into relationships with other Sims, as well as engaging in activities within the games world. This latest expansion pack takes The Sims into a new and fantastical supernatural world filled with magic, Vampires, Werewolves, Fairies and even more. Fans of The Sims and supernatural kinds of fantasies will want to read on to find out more.

The first thing that I want to talk about is how you begin the game in this new expansion. Much like previous The Sims expansion packs, Supernatural will require you to begin a new town when you start it. So you begin in much the same way as you would any other Sims game, by creating a family and then setting them loose on a household somewhere. The twist here is that you can create individual Sims with various Supernatural abilities and races. For instance, if you wanted a Vampire Sim, you are finally able to do so. In the full release, players will be able to create Sims as the following – Vampires, Werewolves, Fairies, Ghosts, Wizards and Witches.

Once you build your Sims and give them some abilities and stuff, it’s time to set them out on the world. Fortunately this is where things start to get a bit more familiar. Ultimately, this is a The Sims game, and as a result, not too much has deviated from this formula. Your Sims still function much like regular Sims but with some new interaction options, as well as things in the city that are now Supernatural themed.

Anyway, so you’ve picked out a house for your Sims and now it’s time to do some magic. First things that you will probably notice are all the new magic-themed items that you are able to decorate your house with. Some of these are also functional, for example, you have the alchemists table which you can use to brew potions to alter your Sims stats and behaviours. These can also be traded, if I recall correctly, to other players. 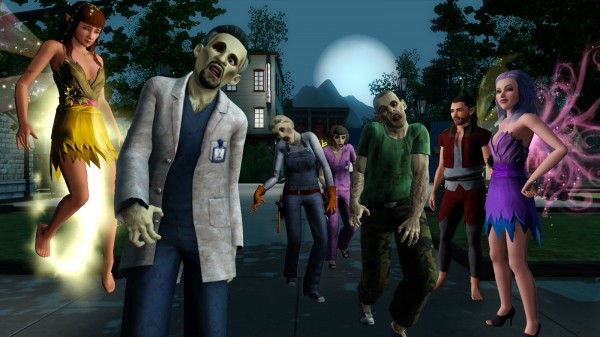 The town that your Sims now live in, Moonlight Falls, has a bunch of new Supernatural hangouts for Sims to enjoy. For example, the Vampires have their own club, The Werewolves have a tavern to enjoy and the Fairies have a pretty lot somewhere in town in which to congregate. The Sims can also visit the local library, which can level their Alchemy skills and allow them to do some research. Also, sometimes some travelers will come through the town.

One of the cool things I noticed in the game is that sometimes some dark creatures will come by your lot. I also noticed a bunch of other cool stuff like this Magic Mirror thing that allows for you to customise your Sims even after you have already created them.

During our play through, we had a pre-built lot with a bunch of Sims that we watched the creation of. The cast was diverse, with one Sim of each type. I have to say that aside from a couple of gimmicks with the interaction dial, not too much has changed on a Sim level with this expansion pack. Much like expansion packs of the past, the core of The Sims gameplay remains the same, whilst the expansion pack adds an entire new theme to it. And in this instance, it is the theme of a Supernatural town.

Of course, not every item in this game is Supernatural. The expansion back also allows you to use items found in the default Sims 3 game, thus giving you a plethora of items that are pretty normal looking. The best way to think of this expansion pack, in my opinion, is to think of it like in the Harry Potter books/films. Everything is pretty normal, but you also have the magic stuff in addition to that. 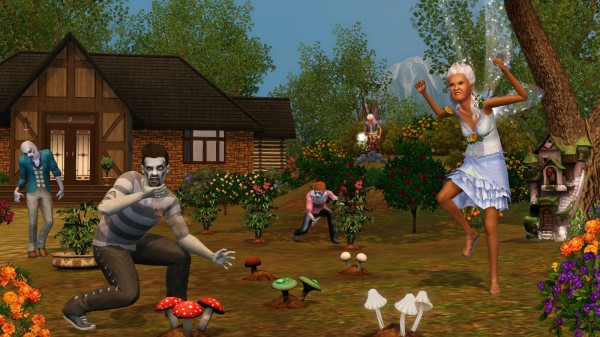 The one race that I was kind of looking forward to fiddling around with were the Fairies. Now, as a Zelda fan myself, I was kind of hoping that you could use them to, like, heal other Sims or catch them in bottles. Unfortunately, there is no Fairy catching in this game, however, Fairies do give some Fairy powder. So there’s a consolation there, I guess.

What I didn’t really pick up on while playing the game was that the Werewolf characters don’t become full-out hairy dog men. In fact, I had no idea that my Werewolf character was even in Werewolf form until it was pointed out to me. I just though that his lurch and weirdness was because he had the ability to to transform into a wolf, not because he already had.

Overall this latest expansion pack The Sims 3 Supernatural Expansion Pack is shaping up to be an amazing addition to the The Sims franchise. It adds a plethora of new features and items to the games inventory, as well as giving players new ways to interact with their Sims. I also think that players will enjoy the new Sim creation options and will find plenty of replayability with all of the new additions to the game. This is definitely an expansion pack designed for fans of the series, as well as those that particularly enjoy supernatural themed books and media. This will probably be a must-buy pack.