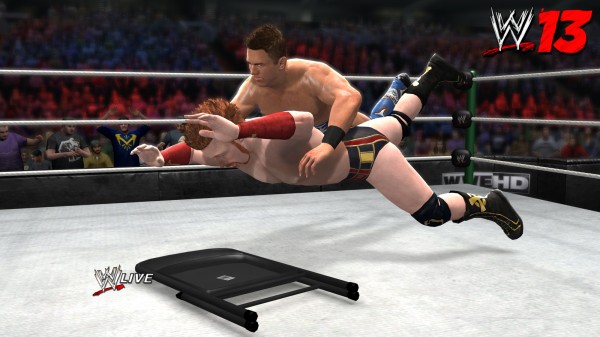 Live the Revolution. That is WWE 13’s tag line. I left THQ’s hands on event at Sun Studios, wondering one thing, ‘Who in the world would call this a revolution?’ If there has ever been a tag line that so poorly represented the contents of the game it was attached to more than WWE 13, I haven’t see it.

Now let me start by saying that the last WWE game I played extensively was Smackdown vs. Raw 2010, I had played the previous two very briefly and found them to be a mess. Unfortunately WWE 13 was no different, in fact, it was worse.

Upon getting my hands on a controller and playing a demo build of the game (looks like this version will be hitting XBLA and PSN soon) I discovered that I had a few choices for match types. I could try out a standard singles match, an extreme rules match, a hell in a cell match and finally a special referee match. I started with a standard match, this was the most stable match type I encountered, it all got worse from there.

First up I decided to play as The Miz and versed Sheamus in a standard singles match. I was instantly confronted with a horribly laid out control scheme. There is simply too many different mechanics at play here and none of them work enough to warrant existence. The most confusing of which is the pinfall and submission mechanics. First of all both pinfalls and submission result in the same outcome, winning a match. Yet for some reason WWE 13 complicates things by having vastly different mechanics for each. In order to break out of a submission you must button mash. In order to get out of a pin you must press a button at the right moment. It doesn’t work well enough at all and I found myself instinctively either button mashing when a pinfall occurred or waiting for the press a button at the right moment prompt to appear. It may sound like not that big a deal, but it definitely ruined the flow of gameplay for me personally. 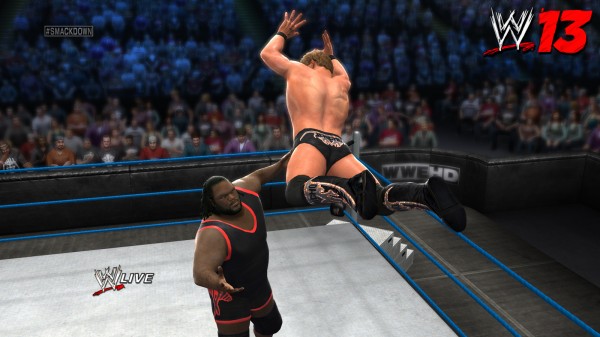 That isn’t the end of it though. I encountered a plethora of glitches, ragdolled models, and broken mechanics consistently throughout the entire experience. The worst of which occured during my extreme rules match. Once again I chose to play as The Miz, except this time I decided to face off against Mike Tyson. First off, the weapon mechanics are absolutely horrible and do not contribute much to the game at all. The weapons generally seem to have no greater effect than grapple moves or strikes and specific weapons like tables and ladders are fundamentally broken (literally in the case of tables).

Towards the end of my Miz vs. Tyson match, I had placed a table on one side of the ring while Tyson was down on the other side. He got to his feet and I decided to hit him with my finisher in order to weaken him for placement on the table. I hit the skull crushing finale (The Miz’s finishing move) and suddenly something incredibly wrong occured. After hitting the finishing move, some how the table on the complete other side of the ring broke into four pieces, I was somehow knocked out and Tyson began to pin me. The problem here though was that no kick out bar appeared, so I had no way of kicking out at all and ultimately lost the match. Thats right, I did my finishing move and somehow the game glitched into me being pinned and unable to even kick out.

Thats not all though, this kick out glitch occured numerous times. No kick out bar would appear randomly leaving me in the wind with no way to stop it. This same thing occured later on in a match that I did with The Big Show and Mark Henry. I had my fellow Capsule Computers Editor Benjamin Webb with me to play multiplayer in this one. We were playing a special referee match. I was playing as Mark Henry and he was playing as The Big Show. First of all we tried to replicate the much advertised ‘ring break’ in which the entire ring collapses after superplexing The Big Show. Unfortunately this was incredibly difficult to do as Mark Henry kept doing a back suplex which did not break the ring, instead causing us to momentarily teleport above it. Eventually I hit the suplerplex and what followed has to be one of the most hilarious things I have ever seen in a wrestling game in my life. Instead of the ring breaking, Mark Henry and Big Show glitched through the mat, ragdolled all over the place, the special guest referree (sexual chocolate Mark Henry) began to look as though he was falling over, he then began to rag doll as well. Suddenly we glitch teleported above the ring and fell back down to normal standing on the ring like nothing had even happened. 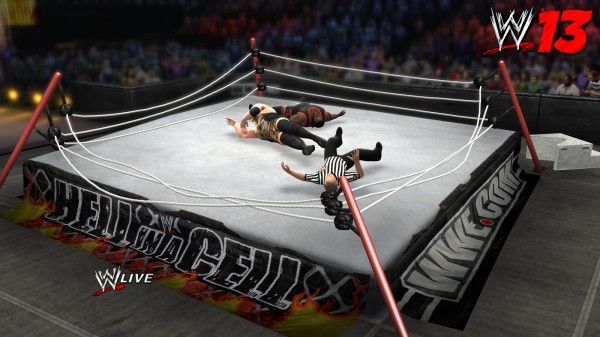 Unfortunately this was not the worst part of this match. Afterwards we decided to play around with the announce table. I pulled off the cover and climbed on top. I decided to try and do a jumping move onto Big Show, instead of that happening I appeared to hit an invisible wall and then suddenly Mark Henry did the animation of falling through a table and the announce table collapsed. Yes, that’s right, somehow I put myself through the table. The game then proceeded to replay me going through the table 6 times, which halted gameplay entirely.

After that match I tried out the hell in a cell match and was disappointed to discover that there is no way whatsoever to escape the cell. The door cannot be broken off or walked out of and the only purposed of the cage is the throw people into it. There was literally nothing special about the hell in a cell match here and it suffered all the same glitches as the other matches, the teleporting, the lack of kick out bar and of course the hilarious ragdolling. I seen in trailers for the game that you can get outside, but in this demo, there was no way that I could find. Maybe that is only available in the full version? Who knows. 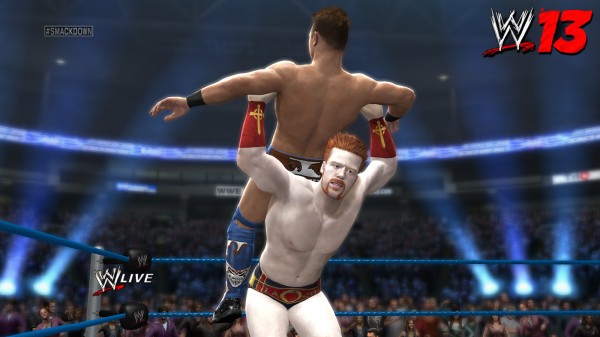 Ultimately I decided to step away from the game as I really struggled to find any enjoyment in it. There was so many countless problems that I couldn’t bring myself to feel any enjoyment at all. To make matters worse, the visuals look like they were ripped from Smackdown vs. Raw 2006 (a game more than 6 years old for the Playstation 2). The textures were horrible and the graphics looked incredibly dated. The entire experience was so incoherent, that I find difficulty in categorising this as a game. There was little that could properly be played here.

I was once I huge fan of this franchise, but as they say, with every great rise, there is an even greater fall. WWE 13 is the lowest point in the series history, after my hands on with the game I can not honestly recommend it. I can only hope that the full version works out these bugs as there was nothing ‘revolutionary’ here, heck there was nothing even redeemable. One last thing, why the hell is there twitter hash tags everywhere in this game?’ Is that really necessary? What more can I say besides: ‘Live the Revolution’? No thank you.