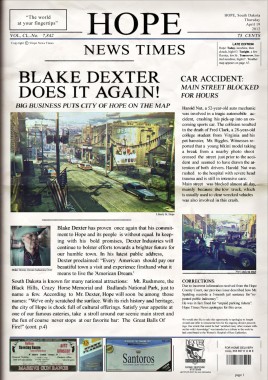 While we haven’t seen all too much of Hitman: Absolution since it was shown off last year, there isn’t much doubt that the follow-up is set to be one of 2012’s biggest releases. As a bit of a mysterious sneak peak, Square Enix recently revealed the first issue of Hope News Times, which is the newspaper for Hope, South Dakota.

The reasoning behind this odd reveal is to give fans a bit of a glimpse into the town, as well as big-wig Blake Dexter, who will play a role within the game’s main narrative. You see, this is the kind of preview I enjoy seeing, as it doesn’t show off too much, but builds an image of what we can expect to see as Agent 47 when the game comes out. Check out the clipping above by giving the image a click, and stay tuned for more updates as Absolution steadily gets closer to launching.

Learn about the living, breathing world of Hitman: Absolution in this latest trailer