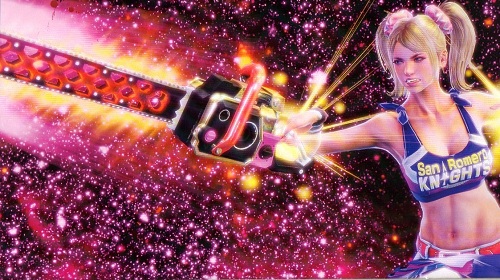 Warner Bros. Interactive Entertainment and Grasshopper Manufacture have revealed the voice actors that worked with filmmaker James Gunn (Super, Slither, Dawn of the Dead) on Lollipop Chainsaw. A game as demented as it is colourful, Lollipop Chainsaw demands a top notch voice cast to flesh out the characters. Taking part in the project are;

Tara Strong, the renowned voice behind dozens of video game and cartoon characters, including Harley Quinn in last year’s  Batman: Arkham City, stars as the game’s central protagonist, Juliet Starling. Michael Rosenbaum, known for his role as Lex Luthor in Smallville, voices the disembodied head of her boyfriend Nick.

Outside of the two leads, the rest of the cast is no less impressive with names appearing from all over the film and television industry. Checking in to bring some verve to Cordelia is Linda Cardelleni, known best as Lindsay Weir from the cult classic Freaks and Geeks. Shawnee Smith, one of the stars of the first four Saw films and Michael Rooker, of Walking Dead and Slither, also appear in the game. Veteran TV and film actor Gregg Henry (24, United 93, Black Dahlia) takes on the role of Juliet’s father and brings all the flair one would assume given his Elvis-inspired pompadour and roots as one of the greatest zombie hunters ever.

Swan, Romero High School’s resident goth, will be played by James’ brother Sean Gunn, who has also appeared in the 2010 film Super and Gilmore Girls. The final piece to this puzzle is the impressive set of lungs on rocker Jimmy Urine from the band Mindless Self Indulgence. On top of contributing to the game’s soundtrack, Jimmy lends his voice talent to the deranged Zed.

Lollipop Chainsaw comes to Xbox 360 and PS3 on 15th June this year.

Lord of the Rings Online: Riders of Rohan Update 11 Incoming