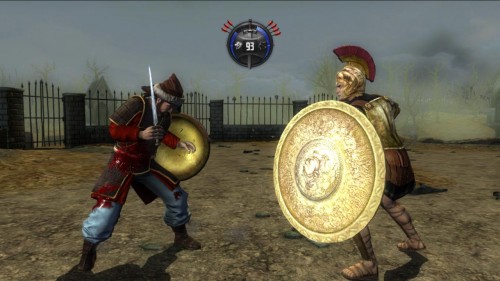 With the upcoming release of Deadliest Warrior: Ancient Combat hitting shelves on April 17th, 345 Games are ready to kick off their campaign for the game that puts the worlds greatest combatants in matches, where it’s a battle to the death. This week, Attila the Hun is highlighted, taking on the legendary Alexander the Great.

Here is a glimpse of each Warrior’s profile:

Attila the Hun – With an unknown birthdate, the Hunnic warrior known as Attila came into the fifth century as violent as he was mysterious. One of the most barbaric men to ever control an empire, Attila ruled from modern Germany to Central Asia with an iron first from 433-453. Known for leading his formidable Hun horseback riders and cunning battle strategy, Attila died pathetically in his bedchamber on his wedding day. If given a second chance, would he die by the hands of his emperor forefather Alexander, or rise to the top of ruling the world?

Alexander the Great –Alexander’s greatest days come nearly 800 years prior to Attila’s rise in the mid-fourth century BC. Even with that much time between these two, Alexander shared many characteristics with the Hunnic warlord. Born to Macedon, Alexander was an outside figure to traditional Greece culture, before stepping in and taking what he felt as rightfully his. From Greece to Africa to deep into the Persian Empire and India, Alexander ruled three different continents. Unfortunately, he too fell by an ignoble death, due to a simple fever that may or may not have been an assassination.

Who will win? Well, that will be up to you when you pick up the game when it hits the Playstation 3 and Xbox 360 in just a little over a month. For now though, check out the new screenshots down below.