If you have always wanted to take a game like Ultimate Marvel vs Capcom 3 on the go, then I am happy to report that the Vita version is worth your trouble. The game will emulate the Playstation 3 version of the game, but will include the DLC mode of Heroes and Heralds from day one. In terms of gameplay, expect the same as the PS3. However, for those who are not great with fighting games, then the touch screen may be your port of call. There will be a separate mode where the touch screen will be available to use. Lucky for you, I was able to try out both single and touch modes of gameplay at the Ultimate Capcom Showcase in Sydney on Wednesday night.

In single mode, you choose a team of three characters as your team and you will face teams of three in a series of fights. Essentially this is the arcade mode of the game. If you are familiar with the Marvel vs Capcom games, then this is right in  your backyard. As this was the Ultimate version, I had to see how Phoenix Wright played. I have to say that he is quite unique. In order to use his special attack, he has to find evidence littered across the stage. He also acquires his famed “Objection” catch phrase as an attack; the speech bubble causing damage. With such uniqueness, it’s hard to see Phoenix Wright to be nothing less than a popular choice. Amaterasu and Dante were also some of my favourites. 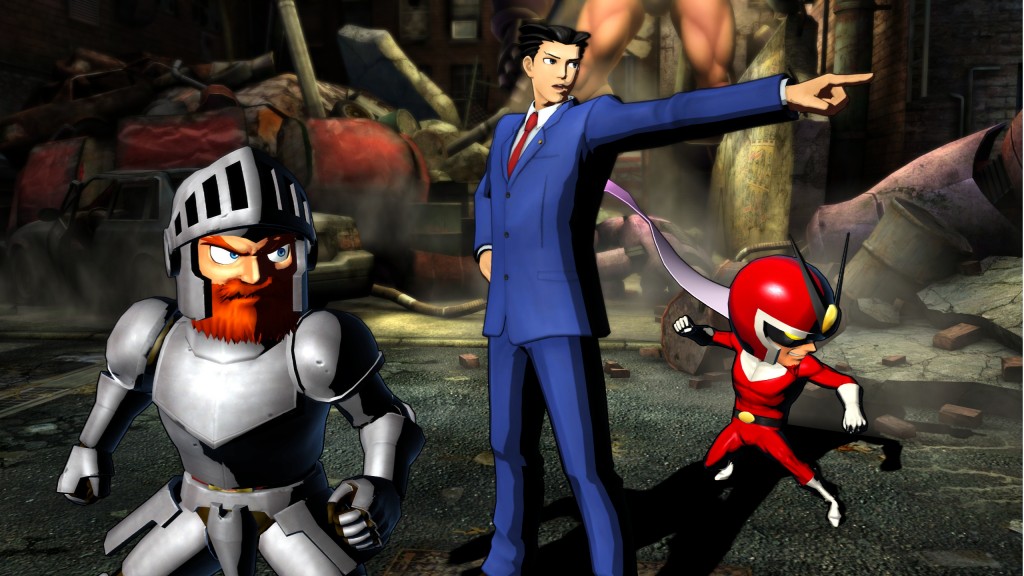 The second arcade mode brings in the touch screen. Moving the player is as simple as swiping the screen. Attacking is just tapping the opponent and bringing your partners in the fight is just tapping the portrait around the health bar. Special attacks are done by tapping the bar at the bottom of the screen. If you think that it is all about the touch screen, then think again. The physical controls are active during Touch arcade mode, so you can combine both types of control for a completely new experience. This is great for those not sold on touch controls but find it hard to execute some of the special attacks.

My time was short with the game but I am impressed with what Capcom have to offer. In addition to the two arcade modes, there will be missions and a training mode for the single player. For those big on multiplayer, there will be online multiplayer as well as ad-hoc mode. As I mentioned, Heroes and Heralds will be available off the game card from day one. A replay mode will also be available,  exclusive to the Playstation Vita. Save that awesome fight you just had and watch and edit it to your delight. You can also share it with the world. With smooth graphics, a great selection of characters, awesome gameplay and Vita specific features, Ultimate Marvel vs Capcom 3 on the Playstation Vita is worth a look at. It will be one of the strongest launch titles for the Vita when it is released on the 23rd of February 2012.