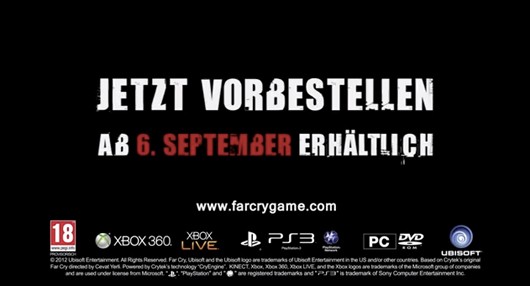 Nothing says information leak like a video game trailer released in German that reveals the release date of your game before the planned reveal time. Ubisoft has only currently set Far Cry 3’s release date as a very vague 2012, meaning it could be released anytime between now and December 31, 2012. However thanks to the leaked trailer it seems the game will be released September 6 in Europe or September 4 for North Americans.

The trailer with the leaked information has since been pulled down by Ubisoft though Joystiq still managed to grab the above image of the screen that provided all the information fans needed to know about the game’s release schedule.