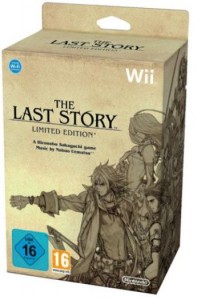 A few months ago, European Wii owners got a nice surprise of finding out that The Last Story would be heading westward and hitting shops on February 24th. Nintendo have now announced even sweeter news for those anticipating the Mistwalker RPG though, and that is that a collector’s edition will be available upon release.

As you see above, this set will be packaged in a nice box, with a Steelbook, soundtrack, and miniature art book crammed in. Pretty snazzy, right? Right now, those of us in the U.S. are still awaiting for Nintendo to reveal The Last Story, but nothing has been said as of yet as NOA are more than likely waiting to see how well Xenoblade does in the region. If all goes well, here’s to hoping the rest of the world will see this type of treatment paid to The Last Story as well.