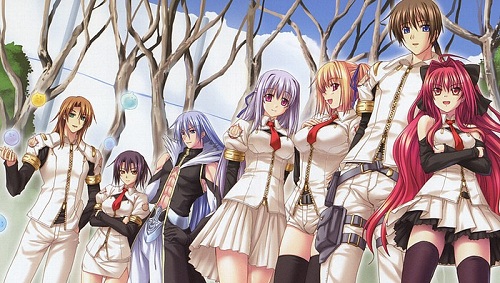 It certainly seems like Section 23 has been very busy over the past week, even more so today. For those who don’t know, Section 23 is the parent company of Sentai Filmworks, which has been picking up multiple licenses over the past week, and also for Maiden Japan which has just announced that they have acquired the license for Polyphonica Crimson S. Fans can expect to see the DVD released with English subtitles only sometime this Spring.

In the world of Polyphonica there lives a certain type of musician capable of communing with the spirits. They are called Dantists and are able to use their music to control the spirits in battle for good or for evil. Polyphonica Crimson S follows the story of Phoron who, despite mastering everything needed to become a Dantist, is unable to do so due to a promise he made as a small child to a spirit. When that spirit returns 12 years later he finally is able to make his contract with the girl. The only problem is she is named Corticarte, also known as the Crimson Annihilator.