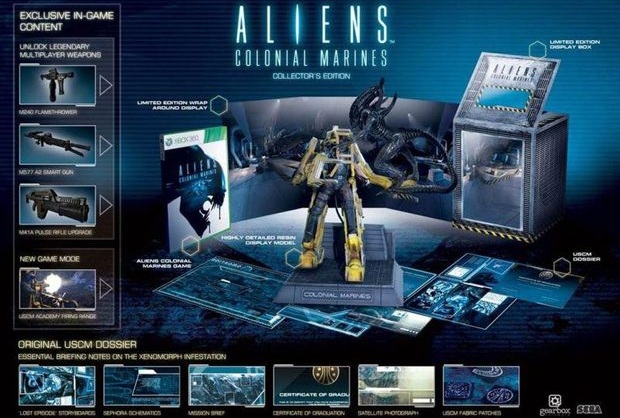 The internet contains a wealth of information, even information that some companies weren’t planning on revealing quite yet. Such is the case with this possible Aliens: Colonial Marines special edition. The image was discovered on Gamekyo and being that Sega has yet to confirm any special edition or make any statement about there being a special edition this news can best be seen as a rumor, but a very hopeful rumor at that.

The special edition as seen above, contains a resin figure of a xenomorph attacking a Power Loader, a USCM dossier, a wrap around display and digital content such as the M240 Flamethrower, M577 A2 Smart Gun, M414 Pulse Rifle Upgrade, and the “USCM Academy Firing Range” game mode. To be honest this special edition looks to be the real deal, but also could simply be a very elaborate fake. We’ve reached out to Sega for their stance on this special edition.