Earlier today at a secure location hosted by EA, us here at Capsule Computers managed to get some hands-on time with the upcoming Kingdoms of Amalur: Reckoning video game for the Xbox 360, Playstation 3 and PC platforms. The video game in question is an Action Role Playing Game developed by Big Huge Games and 38 Studios and is published by EA.

My session began with a character that was proficient in both arcane magics and close range melee combat. Daggers and Staves are two of my favorite pieces of fantasy weaponry. So I took this character and ran around for a little bit, hoping to get to practice some combat. Before long, I had encountered a small group of these small wooden creatures with leavy masks, kind of like the Koroks from WindWaker. These creatures, though, are called Boggarts; and they’re very scared of fire. I took the time to learn the controls of the Xbox360 version of the game with these creatures and before long kind of got the controls and flow of the combat.

Using one button to use my firey staff of death (note: this is not the staffs name) and then laying in the pain with my daggers at close range, I found that the Boggarts were dying very quickly. I needed a further challenge, so I hit the start menu to see what the games difficulty was set to. It was on Casual, so I ramped it right up to hard and let me tell you, hard mode is -really- hard. I found myself being owned by simple woodland creatures, like wolves and bandits, and was forced to seek refuge elsewhere. I soon found myself in the front of this kind of tower, library thing with barricades around it and a whole platoon of soldier looking people. So I did what anyone who wanted to get the most of the combat in this game would do, I switched on a mode that allows you to attack civilians and other friendlies and engage with them in combat.

Combat in this title feels very similar to Fable and other similar Action RPGs, such as The Witcher 2. When I first engaged with this troupe of soldiers, I found myself getting owned quite easily and was forced to scoff health potions as my health waned. This forced me to think about the fight more tactically and engaged in a tactical retreat and engaged, after a fair distance, the fastest unit to approach me. After a long, but satisfying, firey, yet, eviscerated fight, I found myself ready to enter the building before me. 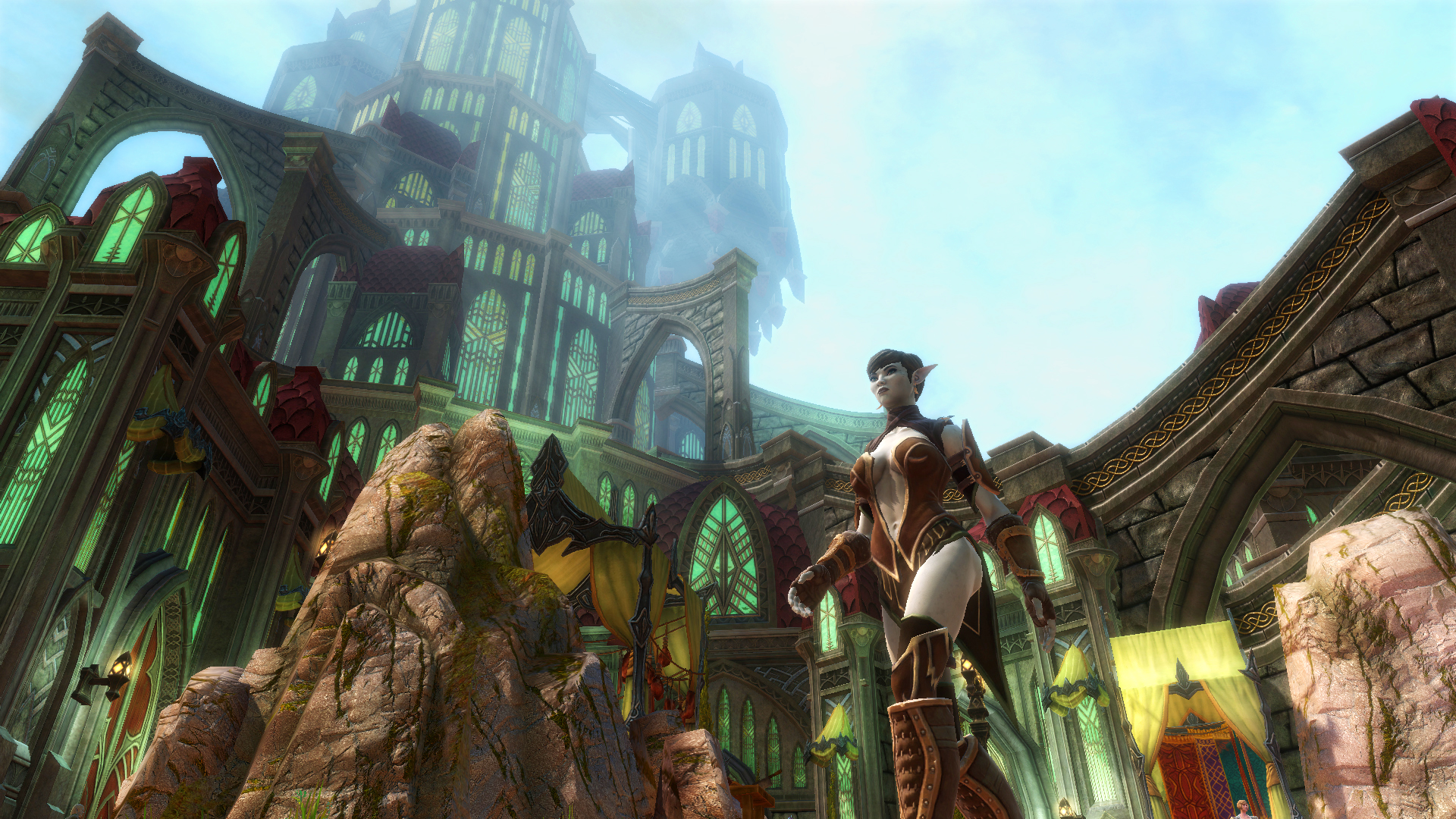 Unfortunately for me and my health, the guards within the compound were not very impressed with me after I had cut their staff outside into pieces, and/or charred their remains. This means that as I entered the building, they would attack me on sight. I could have left the building at any time, but I saw it as a challenge that needed to be conquered, so I instead proceeded into the building, rolling through the guards attacks and getting my backside handed to me the first few attempts. For some reason, I could not get enough of the combat in this game, it was so fluid and it was an incredibly tight experience. It was also incredibly fun.

After a few more attempts at cleaning out the location I was residing in, I had finally got it done. I had won. I was the supreme victor of this room, on Hard difficulty. Still hungering for further challenge, and a slight ounce of curiosity, I headed to a nearby town to see how difficult it would be to eradicate an entire town of people within this game.

One of the features I enjoyed in this game, was the Destinies system. Essentially, what the system does is it allows you to change your class based on how you want to play. The more you level your character and distribute points, the different kinds of classes you can unlock. Each class has their own combat efficiencies, but I found my favorite to be the Rogue Destiny. This destiny made my attacks with daggers much more effective and matched my playstyle much better than any of the other available Destinies at the time. 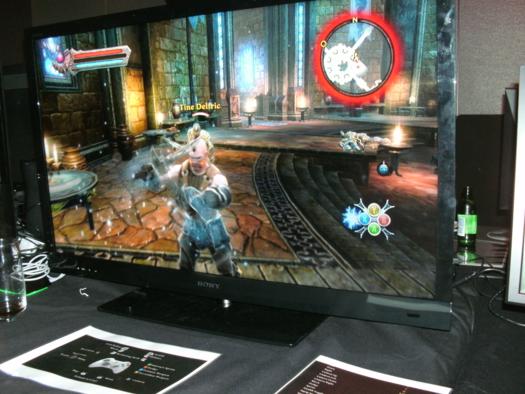 By the time I had found the nearest town, Gorhart I believe, and eagerly engaged with the Guards of the town. What I was surprised to find was that when I initially hit one of them, they would first try to arrest me. This brings up a prompt similar to the one found in the Elder Scrolls series. Go to Jail, Pay the Fine or Refuse (these are not verbatim). Seeing that my fine was fairly large, 24k gold, I decided to continue my slaughter. What I was not expecting, as these guards were pretty alone, was for the entire cities guard to become hostile and march over to my position. My first reaction upon seeing such a large force advance on my position was one glee. However, glee was soon morphed into fear, as the guards were very difficult to kill. I had considered lowering the difficulty, but, where’s the fun in that.

Before long, and after a few deaths, I had devised a winning strategy. Kill the ranged guards, run and roll around the town until there is a considerable distance and then kill the fastest units. This tactic performed surprisingly well, but was still slightly inadequate. Especially once they get you cornered. However, if you kill enough enemies, you generate points into your Reckoning guage. Filling this meter allows you to utilise a special mode that can really bring on the carnage. Enemies nearly stop while this mode is active and you can wail on them as hard as you like for as long as the mode is sustained. While also in this mode, you can engage in certain special attacks that appear as button prompts, once you engage in a special attack you mash the prompted button as fast as you can. This better you do in this regard, the cooler and more stronger the attack (or at least that’s the impression that I got from it).

After wiping the town out a few times, I found that guards were continually coming out from a nearby tavern. I entered and a bar-fight ensued. 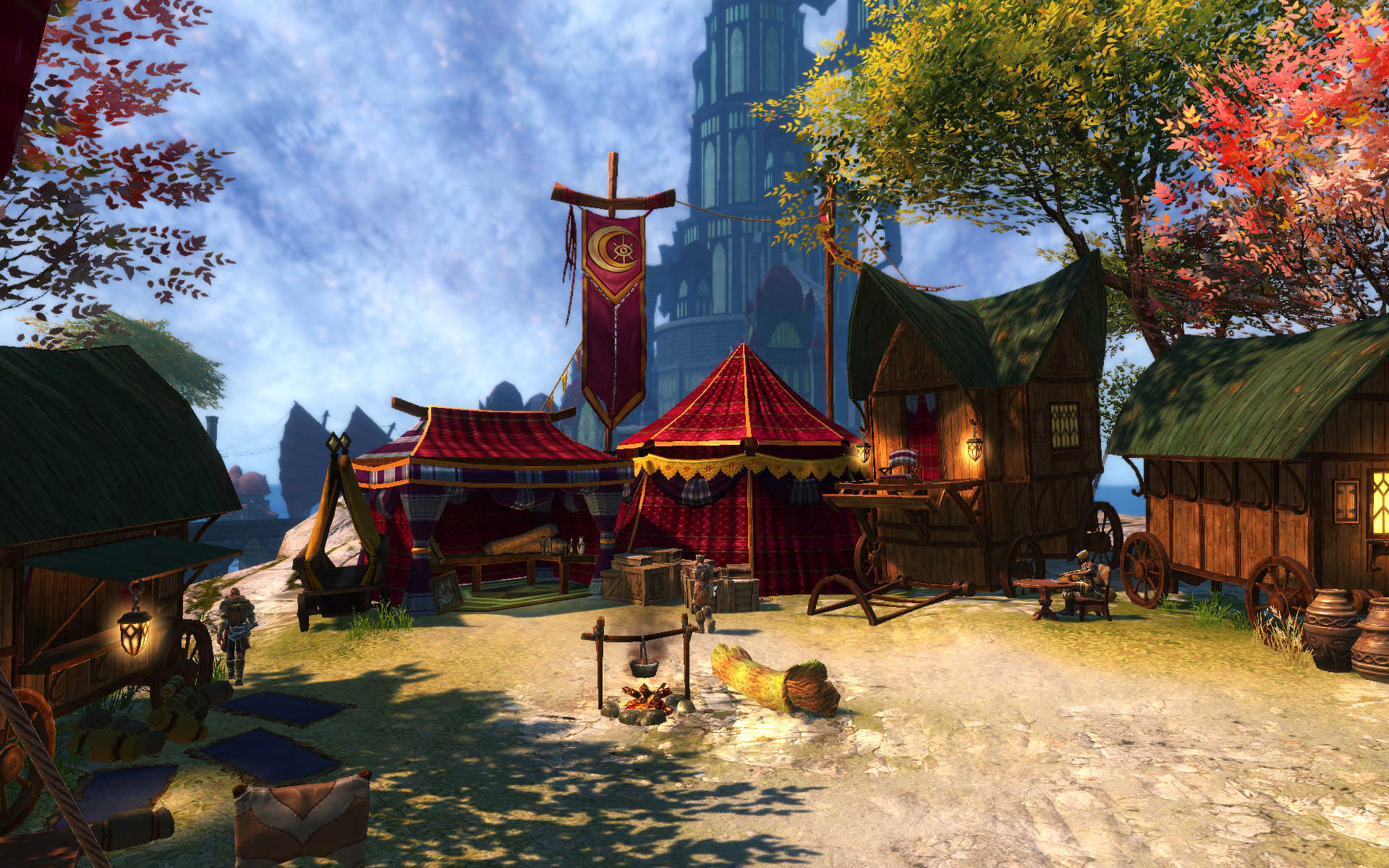 Now by this point I was all out of potions and my thumb was tired from mashing so much during my massacres, but I didn’t relent. I found the most powerful looking goof in the bar and started a fight with him. However, fate was not on my side when he and a few of the town guards got me cornered and unable to evade to safety. I died there. One more death on my road to conquest.

Fortunately, my save was nearby, so I was able to re-enter the bar and re-engage. I had deployed my usual hit and run tactics in this much smaller location and ended up in an upstairs area. This allowed me to easily funnel any troops that wanted a slice of my pudding and also allowed me to carve up anyone foolish enough to climb to the top.

Kingdoms of Amalur: Reckoning was an amazingly fun game to play. It lends the best parts of The Elder Scrolls and Fable and combines them into a gripping experience that is so much fun to play. Unfortunately, during my run, I was too caught up with causing mischief that I didn’t follow any of the quests. I may also have cackled maniacally a few times and taunted the AI out loud. I haven’t been that gripped with a single player game in a while and will definitely be picking this up at launch.

The many fighting styles of Kingdoms of Amalur: Reckoning detailed in trailer