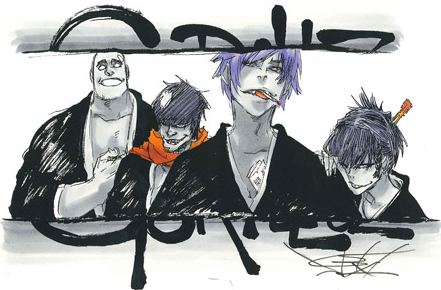 This past week marks the 10th anniversary of the popular animated rock-band Gorillaz conception. For those playing along at home, it was also 10 years ago that Tite Kubo started his now infamous supernatural action manga Bleach. Kubo has this past week drawn tribute art for Gorillaz 10 year anniversary, in his trademark art style.

Alongside the artwork which can be seen above, Kubo stated the strong attachment he has to the Gorillaz:

The impact from “Clint Eastwood” still lingers 10 years on.

In the same year I started to draw my current work, Gorillaz released the 1st album. For these 10 years, Gorillaz have remained very special to me. They will continue to do so for the next 10.

Before the next 10 years begin, I need to listen to this album.

Thanks Gorillaz. All the best for the next 10 years.

It is quite clear that the Gorillaz left a lasting impact on his work as well as his life and for that he holds the band in high regard. In other Bleach news, is Ukitake the final villain?

What do you think of Kubo’s artwork tribute to Gorillaz? Is Ukitake the final villain? Let us know you thoughts in the shoutbox and comments section.