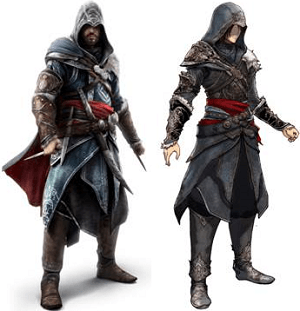 Quick, think of the strangest cameo appearance a character has made in a different franchise or a reference to another title that just seemed a bit out of place. Now listen to this, it appears that Square Enix is going to be teaming up with Ubisoft to provide quite a unique piece of DLC for their upcoming title Final Fantasy XIII-2.

It was revealed today that they will be bringing Ezio Auditore’s assassin garb from Assassin’s Creed Revelations to Final Fantasy XIII-2 as an alternate costume to be worn by FFXIII-2’s new time traveling hero Noel Kreiss. They have yet to price the DLC or give it a date of release, but considering Final Fantasy XIII-2 doesn’t come out until January 31, 2012 they have plenty of time to work that out. Any guesses as to who or what they may reference if they do a costume for Serah?