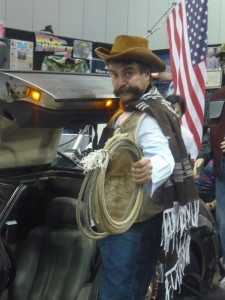 The first thing I noticed was the moustache. As I tried to remember whether Doc Brown had had a moustache in Back to the Future, I realised it wasn’t part of the costume – this guy simply had an epic mo of his own.

Calling himself “Doc Braun”, this very enthusiastic fan has built his own Delorean – the iconic time machine from the classic time travel saga. He’s attracted the attention of fans of the films, car buffs and even the studio behind the trilogy. And he’s done it all for charity.

We had a chance to talk to him at the Armageddon expo in Melbourne, where he was displaying his Delorean for the appreciative crowd.

Assuming he was a Back to the Future fan seemed a pretty safe bet, so I went straight into asking when he first saw the movies.

“I remember exactly,” Doc replies. “It was in 1985, I was in the Perth movie theatre with a very pretty girl. And the minute I saw the car roll out from the back of the truck, I forgot all about the girl, and I just went straight into the car. And I’ve been there ever since.”

“My favourite is probably the second one, because it shows the future, the promise of tomorrow. It’s really hard to pick a favourite, they’re all brilliant. The whole thing is just absolute genius work. I doubt there will be another movie made that will rival this one.” 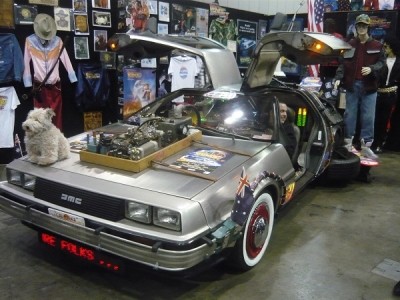 There’s a pretty big leap from simply enjoying a movie to building a working replica of a movie’s famous car, so I had to ask how this came about.

“Ever since I saw the movie I started migrating time machine parts into regular driving cars. It got to the point with the local police deciding whether they pull me over for it or not.

I just kept adding and adding and adding, but no matter how hard you try, without the real Delorean as a base, it’s really hard to get the right look. I’ve got another car with gull-wing doors, and I had a lot of fun with it, but the snag is, it’s just not the same thing. So eventually when I got the real thing, I just went for it. I had so much background information, I was ready to go.”

“It’s an original factory car, ready to go, it drives perfectly. I got it from Memphis, Tennessee, in the US, and from a very nice, honest person who helped me out from the great distance of Australia. So we imported it here, and I’ve spent the last four years part-time doing the time machine assembly. 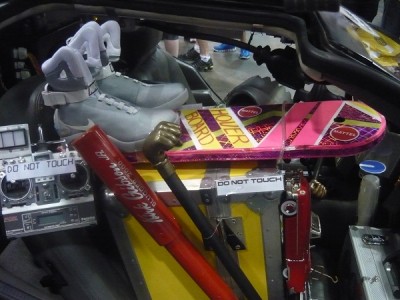 Some of the prop guys from the movie actually heard about what I was trying to do, for charity, and they helped me out with original left over movie parts, original molds from the movie car, and inside information. But the deal was, just for charity.”

“So what you see before you is the world’s first combination Back to the Future 1, 2 and 3 car. I mean, I can do either car, but I like to make it like a museum on wheels. There’s everything there for the fans, who appreciate every detail. What I did was take all the best stuff from all the best cars, all the best scenes, and put it on the one car.”

And it’s all accounted for. The car is adorned with props and elements from all three movies: on the dashboard is the Sports Almanac that Biff uses to make his past self rich. On the seat is the Mattel Hover Board that Marty uses to escape Biff’s cronies in 2015. There are banners for the Enchantment Under the Sea dance, where Marty’s parents met. The “You’re Fired!” fax is there, as is the 1885 newspaper reporting Doc’s death. And inside, there’s a programmable date display, a key function for any time traveller. 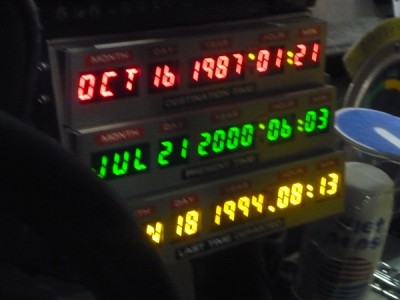 There’s even a stuffed dog bearing an uncanny resemblance to Doc Brown’s companion, Einstein. According to our Doc, the toy is a stand-in for his own dog.

“I got him from the Lost Dogs Home in Canberra, the perfect image of the dog in the film. And his name was Albert – in the movie the dog’s name was Einstein.”

Doc proudly says that everything on display is from his own collection, which is too large to have ever found a venue big enough to show everything at once. Which begs the question: how does one find the time and money for such a devoted fanship?

“It’s easy for me to do this. It’s a natural thing. If I was a paid actor, if it looked fake, or I hated it, it was just my day job, you couldn’t do this. You can see there’s passion in this.” 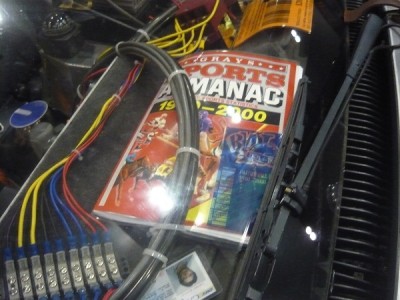 That passion is very clear, and it’s quite infectious. While we’ve been talking, there hasn’t been a lull in the number of people walking past the display, stopping to take photos and sitting in the driver’s seat. And Doc loves the overwhelmingly positive reactions.

“I mean look, look at all these happy people. That’s what it’s all about, that’s payment. Who wants money?! I mean, obviously it’s cost me money, I’ve worked hard to pay for all this, but it’s a labour of love. I love what I do, and I love people’s reactions.”

He makes it clear that his primary goal is to support charities, and these positive reactions to his work encourage people to donate.

“With the charities, I’ll help anyone and everyone who comes to me. I do the full circuit, they’re all wonderful causes, but I’m preferential to the kids charities at the hospitals.”

Doc hasn’t been shy about telling us his stories, and his work with the charities has given him a few particularly proud moments.

He tells of one little boy who brought in his family’s money jar, and presented Doc with a plaque to thank him.

Another was the story of a Back to the Future fan who had never actually seen what the Delorean looked like.

“He was touching everything, and it suddenly occurred to me that he was blind. He felt the whole car.” He knew the movies word for word by sound, but this was a way for him to “see” the iconic car he had heard so much about. 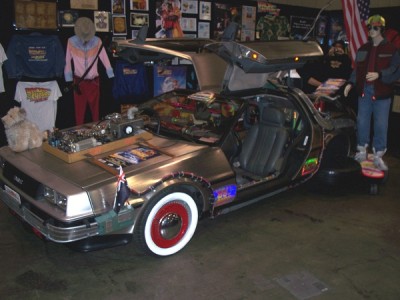 It’s obvious our Doc Braun loves these classic films, and lives for what he does. Speaking to him, his honesty shines through: this is a man who genuinely cares more about the people he’s helping than the money he could be making from his project.

While his fandom to a twenty-five year old film may seem excessive, he explains it confidently and with heart.

“My thing with the movie is, it changed my life. I work with a lot of depressed, manic, sick, sad, unhappy people, and what I’ve shown them is that what you do today changes tomorrow. So you can sit there and be unhappy, or you can get off your backside and do something, and go for it.

And the movie concept is real. I mean, it’s just a movie, it’s just a car, but the principle is, what we do can change things. And it was such a perfect example of that in a movie. I think it’s the best example: it was entertaining, but it really made you think.”