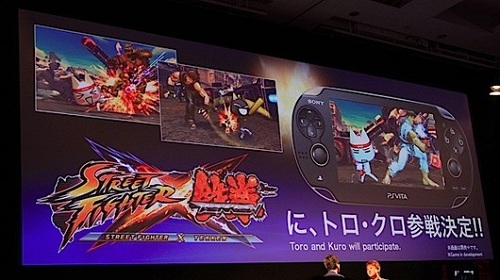 Sony is really pushing to have fans of fighting games and the Street Fighter and Tekken franchises purchase the upcoming Street Fighter X Tekken on the PlayStation Vita. Not only did they announce Cole McGrath from inFamous during E3, but now during Sony’s pre-TGS event they have announced another couple of characters exclusive to the Vita.

Sony’s mascot in Japan, Toro will be playable and so will his neighbor Kuro. Toro, the white cat is also known as Sony Cat and has been one of Sony’s best PlayStation mascots in Japan. While many fans outside of Japan may not be interested in these characters, Japan is going to be quite glad these characters are included. Plus who doesn’t want to beat up their favorite fighters as a little white cartoon cat.