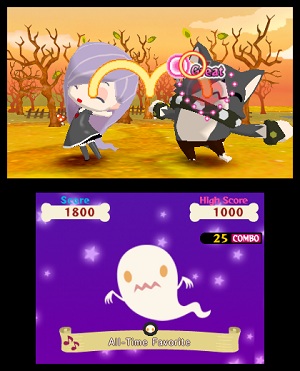 It was quietly announced a few weeks ago that Gabrielle’s Ghostly Groove 3D was delayed to an unknown time. Well that delay is nearly over as Natsume Inc. revealed that Gabrielle’s Ghostly Groove 3D has gone golden. This more or less means that the game is officially complete and ready to be shipped to stores in North America. Of course this won’t happen until the game’s official release date on October 4th.

Gabrielle’s Ghost Groove 3D will be a rhythm based adventure title where players will help a young girl named Gabrielle find her soul after she lost it by sneezing. Hiro Maekawa, President and CEO of Natsume says that the title is “a family-friendly rhythm adventure game loaded with spectacular dance moves, cute, quirky characters, and a fun-filled story!”

Nintendo of Japan Reveals Launch titles for the 3DS…