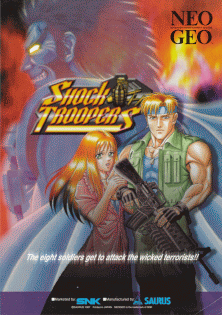 One of SNK’s classic games is set to return this year to the Playstation 3 and Playstation Portable via the Minis service on the Playstation Store. Part of “NeoGeo Station,” it is set to hit Japan on August 25, and the top down shooter is most likely releasing everywhere else as well.

One of eight squad troopers is under your control as you fight through the jungle to rescue a scientist and his granddaughter. You can watch the trailer for the game below. Are you excited about returning to the rough and tumble world of retro games? Or should old games be left where they lie?