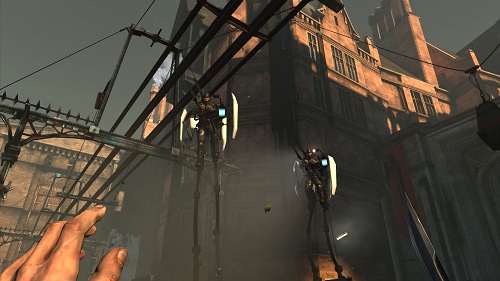 Dishonored is a game being developed by Arkane Studios and published by Bethesda and it looks to have some crazy things involved. Today Bethesda released a handful of new screenshots for the title, including some stealth gameplay and some potential combat.

At the moment there has been no actual screenshots of the main character Corvo in combat, but there is plenty of combat about to be entered as you can see below. We have one screenshot where three enemies are charging at him and another with a pair of officers standing on mechanical stilts with what appears to be bow and arrow type weaponry. Very strange… Check out the screenshots below and Dishonored sometime in the middle of 2012.