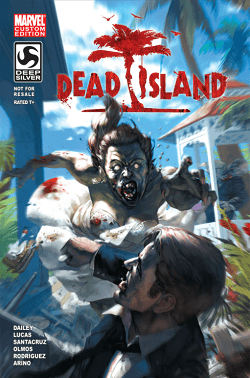 Curious about what life was like on the resort island of Banoi before it was infested with zombies and people were dying everywhere? Well Marvel Comics just revealed the prequel comic for Dead Island, and you can read it at their website here. Unfortunately the comic is quite short and also provides a small profile for each of the characters.

The comic was created by Marvel Custom Solutions’ writer William Dailey and drawn by artists Jorge Lucas, Juan Santacruz, Diego Olmos, Carlos Rodriguez and Sergio Arino, with the cover art you see to the right drawn by Christian Nauck. This is a great little feature to satsify your appetite for everything Dead Island related before the game is released on September 6th on the PlayStation 3, Xbox 360 and PC.