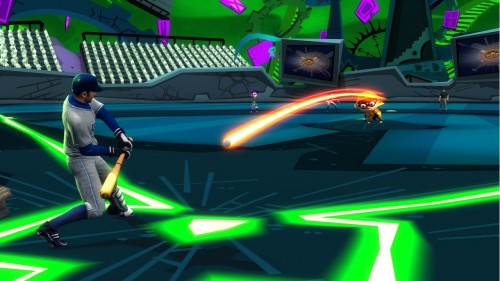 I have never been one to actually enjoy the sport of baseball, or really any sports games for that matter aside from the Mario fare. Oddly enough, 2K Play’s Nicktoons MLB has my attention as it looks bizarrely beautiful due to the mixing of professional Major League Baseball players with new and old Nicktoons characters. Today, 2K Play dropped a lot of new info for the game, revealing the stadiums and cast of Nicktoons that will be featured within.

Additionally, Perch Perkins from SpongeBob SquarePants and GIR from Invader Zim will take residence in the announcer’s booth, as Nicktoons MLB commentators.

Powered Toast Man as a playable character in a baseball game. Just brilliant. I grew up with a few of these toons, so the nostalgia card and the polish Nicktoons MLB displays are definitely working their magic for myself, but honestly I can see this title being hugely popular with kids of today in general. Nicktoons MLB launches September 13th for the Xbox 360 (with Kinect support), Nintendo Wii and Nintendo DS. Check out the new screens below and let us know what you think of Nicktoons MLB in the comments below.

The Moxie Girlz Make their debut on the Nintendo DS..