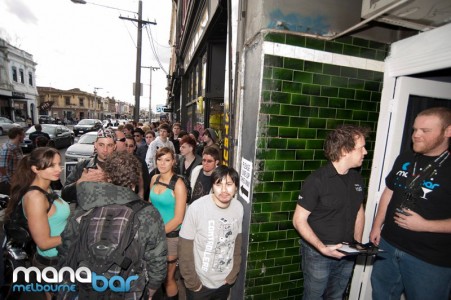 There’s an old saying in the hospitality industry: “You haven’t really made it until the line outside is so long that the riot squad will be called in if it doesn’t disperse.”

If that’s the case, then Mana Bar Melbourne “made it” within hours of first opening its doors to the public on Saturday. The line, consisting of Lara Crofts, zombies, Pacmen, Links, Zeldas, and even the occasional plain-clothed patron, took up much of the walkway for several Brunswick Street blocks. Not surprising, really – the opening event for the 50-person capacity venue had over 2,300 attendees, according to Facebook.

With their liquor license at risk, the staff quickly introduced a ticketing system, whereby tickets were handed out to rotate 50 people through each hour. By the time we got there at about 7pm, it was booked solid for the night. Unperturbed, we decided to hang around and try our luck.

Looking longingly through the window, the venue was a clear success. People were milling around, drinking alarmingly-vibrant coloured cocktails and obviously, playing games. 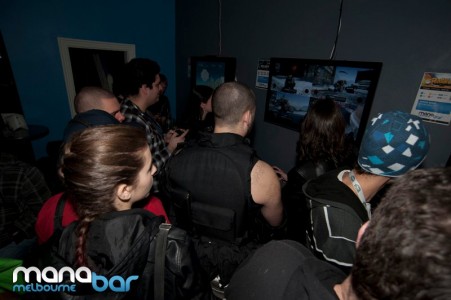 The concept didn’t just appeal to the people who’d been waiting months for the opening, either. In the 15 minutes or so we spent standing out the front, plenty of people walking past would stop and ask about it, try to get in, or just stand and take photos.

After some dinner, and a few drinks at the gypsy bar next door – which seemed to be doing quite well just from Mana Bar’s spillover – we managed to get inside thanks to some 10 o’clock no-shows.

We immediately went for the bar to try some gamey cocktails. The first round we tried the iconic Mana Potion and Health Potion, and despite the $15 tag leaving a larger dent in our pockets than we’d hoped, they more than delivered on taste. It’s still my goal to try all the cocktails and shots – except the Imp. Licorice is the Devil’s doing. 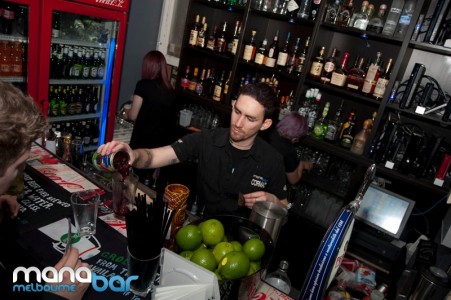 It took me a little while to even notice there was music playing in the background, and longer to realize what it was. It wasn’t until I heard a familiar sting that it clicked: a Zelda theme instrumental. The music selection across the weekend, played at a volume that wasn’t imposing, was a mix of “normal” music; chiptunes, both from games and original compositions; and instrumental or remixed versions of classic game music. One that struck a chord with me was a version of Stickerbrush Symphony: the bramble level music from Donkey Kong Country 2. It never occurred to me that I might hear that outside the game.

We wandered down a small corridor, past a display cabinet of various game merchandise, to the back room, which featured an early demo of The Darkness II, an arcade machine stocked with a selection of great indy games, and a permanent Guitar Hero World Tour set up.

We spotted several faces familiar to gamers: professional angry-man Yahtzee (who my girlfriend proudly “collected” on her 3DS, via Streetpass), Good Game co-host Hex, “ex-Hex” Junglist, and what seemed like the entire staff of the Brisbane Mana Bar. I have no idea who’s keeping an eye on things up there. 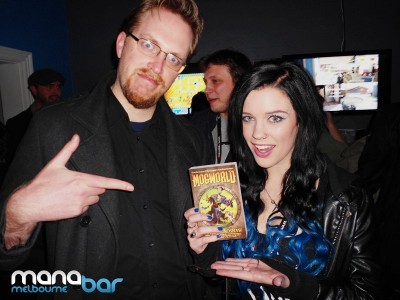 We had little more than an hour inside, but it was enough to soak in the unique atmosphere. We went back on the Sunday night, to a much more relaxed ambiance. This time I ran into a friend from Qantm, and for most of the night we hung out with her and her friend – who turned out to be Junglist.

The thing that struck me was the general friendliness of absolutely everyone, patrons and staff alike. We jumped into a game of Raskulls with two randoms, and bam! Insta-friends. Soon after, while watching said game, the guys next to me needed a fourth player for Black Ops, and I was conscripted. It really is the perfect ice-breaker for meeting new people: completing gigs as a band in Guitar Hero is a bonding experience like no other. And once the game is over and everyone swaps around, you continue talking to these people. Playing a game with new people removes that initial awkward barrier.

The friendliness wasn’t confined to the customers, either. The staff were also enthusiastic about getting out there and mingling. They could be seen wandering around, talking to anyone and everyone, jumping into games like it was their own living room. Nowhere else is the staff so genuine, or so involved with their customers.

Overall, the Mana Bar obviously caters to gamers, but does so in a more refined manner so as not to alienate non-gaming customers intrigued by the quirkiness of the venue. Contrary to the popular assumption that the patrons would all be fat, sweaty neckbeards, it goes a long way towards showing that games appeal to a much wider audience than the stereotypes suggest.

Melbournian gamers: you have a new regular watering hole. And I’ll be right there with you. 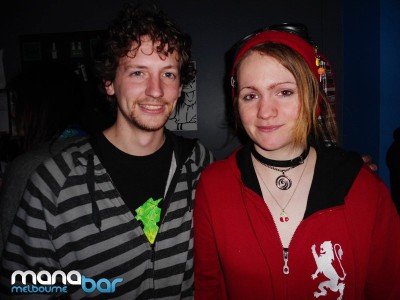 The Mana Bar is located at 336 Brunswick Street, Fitzroy. Open noon to 11pm, 7 days a week.