SNK PLAYMORE has brought the legendary fighter King Of Fighters to the iPhone! While capturing the same beautiful style of art design of the series, the game brings 14 classic fighters to iOS devices. Players can play alone or with friends via Bluetooth with the classic KOF 3-on-3 gameplay, or have a more traditional 1-on-1 fight, as well as have a go at the Endless mode to test their endurance with only one life. You might want to check out the Training mode first to learn some of those sweet combos and get a feel of the controls that includes a special button to quickly preform special unique attacks, much like the one seen in other successful iPhone fighters such as Street Fighter IV and Ultimate Mortal Kombat 3. Unlockable content like trading cards and illustrations are also available,and you can trade it with friends via Bluetooth as well as replays you have saved. To make things better SNK PLAYMORE says extra fighters and exclusive background stages will be available to download in October this year-up to 20 characters! Check out the gameplay footage below courtesy of The Game Trail! King of Fighters-i is available now for the iPhone and iPad on iTunes, and you can pick it up here.

And fellas before you ask, YES! Your dream girl MAI is a playable character, complete with her big, bouncy, umm….personality! 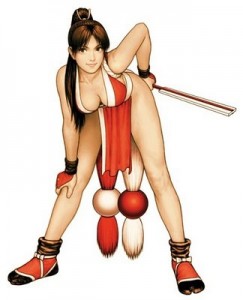