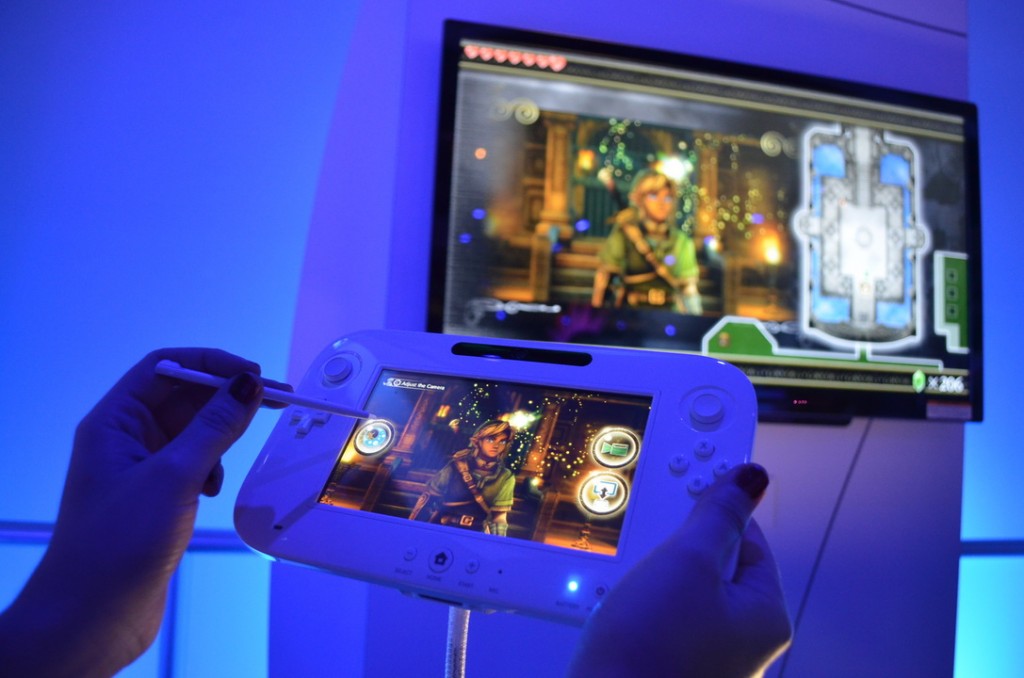 Both myself and MasterAbbott were given a hands on demonstration for each of the Wii U’s current playable experiences. The reason I say experiences is because these games are not actually being developed as legitimate games for the title, but were simply made to help E3 attendee’s be able to understand the technology and the advancements that the Wii U makes.

Japanese Tech Garden:
The first demonstration shown off was simply a repeat of what was shown off at the end of the Nintendo conference. This means that it followed a bird landing on a branch of a tree which suddenly bursts into bloom with Cherry Blossoms. The bird then picks one of the flowers from the tree and flies off with it and dropping it in the water where Koi fish swim around it.

HD Experience:
Yet another technological experience wasn’t interactive but showed off the fact that the Wii U will be able to display games with HD graphics. To do this they took footage from The Legend of Zelda: Twilight Princess and upgraded the graphics to HD and showed off footage against a spider boss of some sort. Link has never looked as good as he did on the Wii U’s small screen, which displayed everything flawlessly from the TV to the controller.

Measure Up:
This experience helped show off the way that players can take the controller and play with two people on one screen. This demonstration allowed two players to follow various instructions and draw the best they could to match these instructions. For example we were told to draw a triangle with 1.5 inch sides and we were graded on how close to this distance we were able to come as well as how cleanly our triangle was made. The person with the better score was given a point and over five matches, the one who won at least three walked away with the victory.

New Super Mario Bros. Mii:
Super Mario Brothers for the Wii U was set up to show attendees that they can play seamlessly without a TV. A TV was set up showing the game itself alongside the Wii U controller which displayed the exact same image flawlessly. We had five different levels to choose from, including a basic ground level, a cloud level and more. Super Mario Bros. Mii has the Mii name because you can play as your own Mii instead of Mario or Luigi. 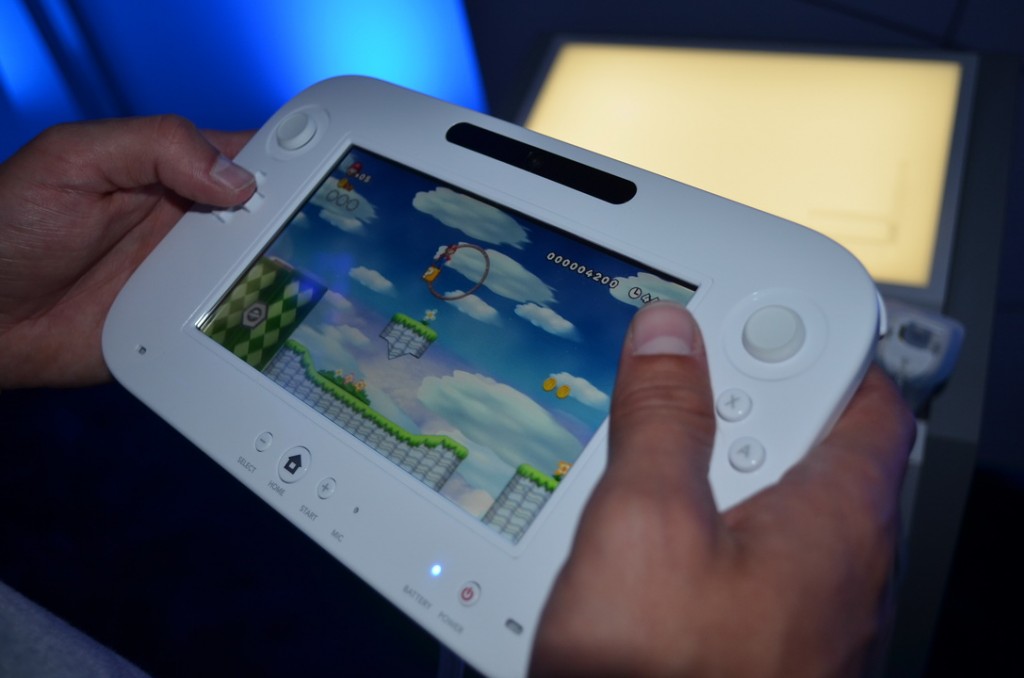 Shield Pose:
The Shield Pose game was set up to show us how the various sensors in the Wii U’s controller detect movement and how players will be able to have complete 360 degree motion. During the experience we were told to raise the Wii U controller at a certain time to block arrows, and then bring the Wii U down quickly to shake the arrows off. This included arrows shot from the left, right and above meaning that we were turning all different ways and blocking the arrows being shot at us. This concluded with a quick dancing session and finally a powerful energy blast that we had to physically shove forward with the Wii U controller to destroy the pirates shooting arrows at us.

Chase Mii:
The Chase Mii game was set up to show the flawless play that Wii U owners will experience with the new and old technology from the Wii. Four players were given Wii remotes and were tasked with chasing down a pre-set Mii character that was being controlled by the Wii U. The Wii U holder was able to see the entire map and was tasked with simply running away and avoid being tackled by the other four players. The experience worked flawlessly and is quite responsive as both new and old tech worked seamlessly with one another.

Battle Mii:
Finally we have the Battle Mii station which allowed three players to play at the same time. Two players controlled Samus Aran bodied Mii’s that also had the ability to roll up into a ball like Samus. These two players use the Wii remotes and are tasked with shooting down the space ship which is being controlled by the third player with the Wii U controller. The Wii U controller holder must defeat the two players on the ground to win and can control their space ship by tilting the Wii U controller one way or another, you are able to shoot with the triggers on the back. The tilting controls felt a bit difficult to use unfortunately and we spent a lot of time nose diving into the ground but thankfully there is a bit of time in the beginning to help accustom yourself with the gyroscope experience before the match begins.

The Wii U is actually as impressive as it sounded in the Nintendo Conference. At first I was a bit skeptical but after holding the Wii U controller in my hand I was pleasantly surprised to not only find that it was very light, weighing no more than two or three pounds, and that it was as responsive to movement as the 3DS is now. The flawless integration of the old technology with the new technology is also impressive, making current Wii owners feel that they will have an enhanced experience thanks to owning both titles when this one is released. 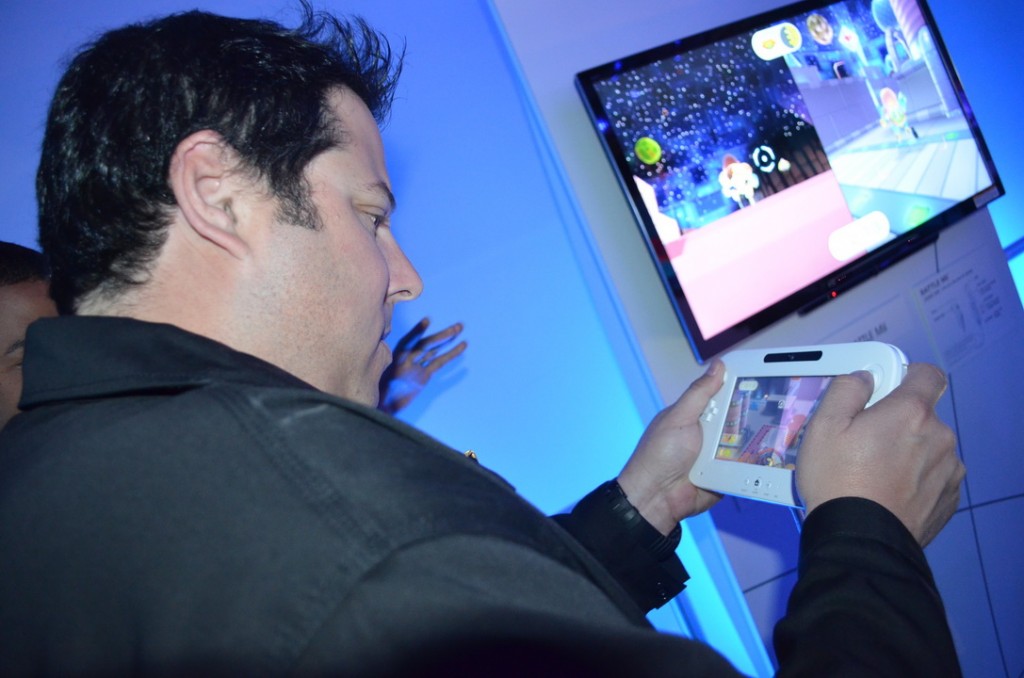 Also I must speculate, that despite the fact that these games were announced only as experiences, that the four playable titles were actually quite enjoyable and could easily be combined into some sort of collection that could be released alongside the Wii U when it is shipped, similar to the way Wii Sports was with the Wii. This however is only speculation and should be taken as such.