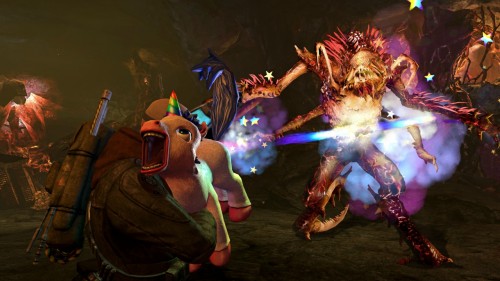 Volition and THQ posed a challenge to their fans, download the Red Faction: Armageddon demo one million times and you will be given a reward. The reward was a unicorn named Mr. Toots that farts out rainbow colored destruction. Players were able to reach this one million mark and now everyone will be able to unlock Mr. Toots once they have completed the single player campaign.

To honor this milestone the company has also released a new video showing the awesome power of multicolored unicorn farts. It could be speculated that the creation of an actual unicorn weapon is based on the internet wide sensation of My Little Pony, but that could only be a vague guess as Volition is keeping their motivation for Mr. Toots secret. Catch the video below.

The World Of Homefront – Developer Diary