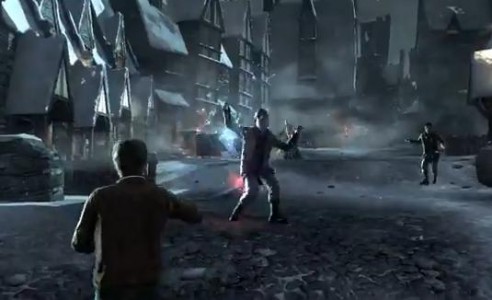 It’s crazy to think that we are just a few weeks away from the final Harry Potter film being released. While I still feel more video games will be emerge later on, Harry Potter & the Deathly Hallows Part 2 looks to finish up the videogame tie-in series to the movies with quite a bang. Today EA released a new trailer for the upcoming Potter game that shows all the young wizards preparing for the final battle at Hogwarts.

The CG clips look quite impressive as it stands as they capture the personalities behind the characters quite well, and from the looks of it this title will utilize the cover system that was introduced in Part 1, which may or may not be a bad thing. If you have ever played Harry Potter & the Deathly Hallows Part 1, you might remember that this style of combat was a bit messy and unpolished overall, but I want to say that things seem to improved greatly as in the clip, Harry can be seen zapping spells from his wand with relative ease and the whole mechanic just seems to much more fluent this time around. I certainly hope the game controls as good as it looks, but that is still up in the air at the moment. All of our questions will be answered soon enough though as Harry Potter & the Deathly Hallows Part 2 releases July 12th on all platforms (except for the PSP & 3DS) . Check out the new trailer below and give us your thoughts in the comment section below.