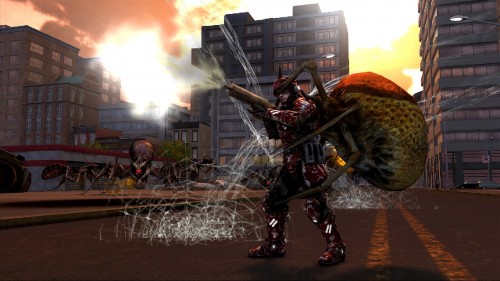 Earth Defense Force 2017 was a game that many of us may have played many years ago when it was released, though many of us may have also simply forgotten that it existed. Well D3Publisher isn’t going to let us forget that the series exists because they have a brand new title coming out on July 5th in North America and July 7th everywhere else for the Xbox 360 and PlayStation 3.

Titled Earth Defense Force: Insect Armageddon, D3Publisher announced that the game has received the gold seal of approval and have also talked about what you can get if you pre-order the title from different retailers. If you pre-order the game from GameStop you will get the Pounds of Pain Battle Armor Weapon Pack package that will give you 15 new weapons while people who buy from Best Buy can get the Death From Above Jet Armor Pack. The game will run the cheaper than average price of $39.99 too so there is no excuse not to pick up this title, especially after watching the launch trailer below.