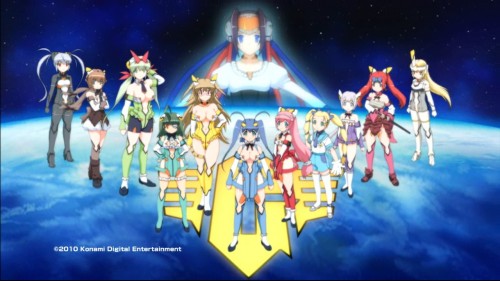 Seems like every other day the ESRB has something going on. Sure they rate games everyday but every once in awhile they either end up rating an unannounced title or providing a rating for a niche Japanese title that is being localized for release in the United States. This ESRB article is the latter. Konami submitted Otomedius Excellent for review and it was given a T rating with a few interesting parts of their description. Catch the description below:

This is a side-scrolling shooter in which players control small characters that fly through the air and destroy fantastical alien ships. Players fire missiles and lasers at waves of enemies (e.g., robot penguins, floating spacecraft, mech-robots) in constant air battles; enemies and objects explode in fiery bursts and bright particles.

The game depicts several female characters in revealing outfits—their breasts/buttocks are partially obscured by towels, strategic poses, and skimpy costumes. In one mini-game, players can scroll an on-screen cursor over characters to “touch” them (e.g., “Stop touching me there,” “You can touch me, but no one else!”); some sequences contain instances of suggestive dialogue (e.g., “We’d better get hot and bothered for this,” “Are you trying to turn me on or find my off switch?”).

The whole touching minigame sounds a bit odd and is something that has yet to be shown by Konami in any of their Western assets. Konami has not officially announced a release date for the title but Gamestop and Gamefly have the game listed for a June 22nd release date, special edition and all.