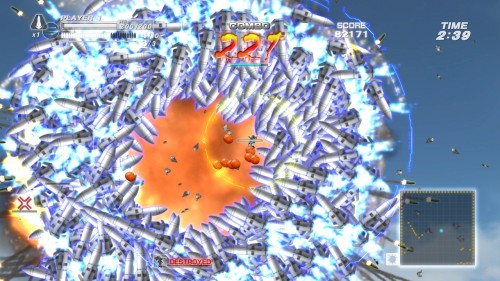 I think the above screenshot describes Bangai-O better than words can. Actually, I thought of some words that might do the trick: “Lots. Of. Missiles.”, yeah that does it. For anyone who hasn’t played Bangai-O, it may look overwhelming. Anyone who has played Bangai-O knows that it absolutely is overwhelming, but that’s the fun part.

Originally developed by legendary studio Treasure, creators of hits like Gunstar Heroes and Ikaruga (as well as more obscure classics like Mischief Makers and Dynamite Headdy, for the Nintendo 64, Bangai-O also found it way to the Sega Dreamcast. In 2008, a sequel titled Bangai-O Spirits was released for the DS, and now finally gamers who missed out at the turn of the millenium can play the original on their 360. This new version, Bangai-O HD: Missile Fury, sports some obvious graphical improvements over its N64 and Dreamcast counterparts along with some other treats for Bangai-O veterans and newcomers alike. 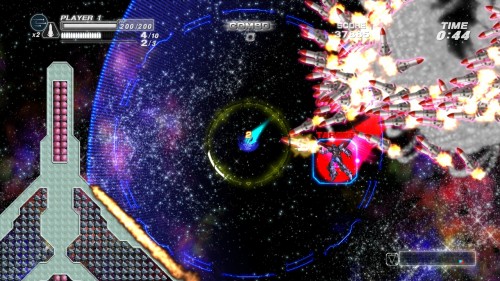 Along with ramping up the graphics for the game’s 100+ levels, D3 has also included a level editor for players who enjoy a more customized experience. Bangai-O HD also features coop multiplater in which the number of missiles on screen must be a metric assload. This revival of a classic shooter also controls via dual analog sticks, which is an absolutely fantastic improvement over the original control scheme.

Bangai-O is one of the those games that you sort of need to play to believe. If flying a giant mech through outer space while shooting hundreds of homing missiles simultaneously while collecting various fruits doesn’t sound fun to you, then you may have a damaged fun receptor and should contact your local physician. For everyone else, Bangai-O HD: Missile Fury can be had on Xbox Live Arcade right now for 800 Microsoft points.  Download now