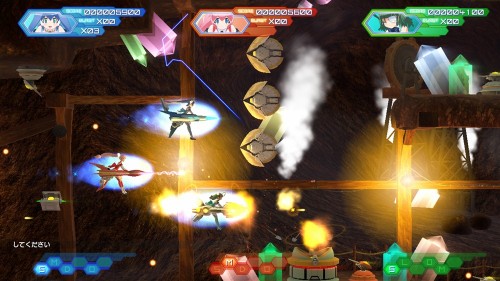 There are some games that are released in Japan that you know will be localized eventually. Popular RPG franchises, sequels to successful franchises, etc. But then there are games that you are surprised to hear are coming out of Japan and onto Western shores. One such pleasant surprise is Otomedius Excellent from Konami. Konami America has released some details about their to be localized eventually shoot’em up.

Otomedius Excellent will be a bullet hell styled game with 2D side scrolling action where players will play as nine different anime styled characters that will play through brilliantly drawn graphical environments. Players can team up with two friends at home or on Xbox Live and if you want to you can always take a look at any pictures you have unlocked in the gallery mode.

One thing that is interesting to note is that the title is being released to retail for an unnanounced price. This move may appear a bit surprising to some but it has been done before. Deathsmiles from Aksys games was released to American audiences last year and was also a shoot’em up style game so perhaps Konami believes that Otomedius Excellent will pull in those same fans as well as even more.