Madman will release Palace Film’s Blue Valentine on DVD and Blu-ray on the 22nd of June. 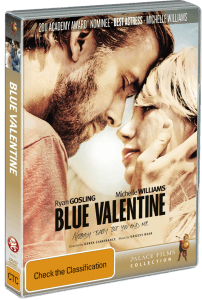 Blue Valentine is a romantic drama which features the talents of Ryan Gosling (The Notebook) as Dean and Michelle Williams (Shutter Island, Brokeback Mountain) as Cindy. The storyline tells the tale of a married couple, shifting to different times in their relationship to provide an insight into the change of individuals and couples as they grow older.

Before you stop and think “romantic? no way!”, just remember that the film was nominated for an Oscar for Michelle Williams’ performance as Cindy…and also, any film with the word “romantic” is a good excuse to have a nice evening with that girl or guy you’ve been eying for the past few weeks.