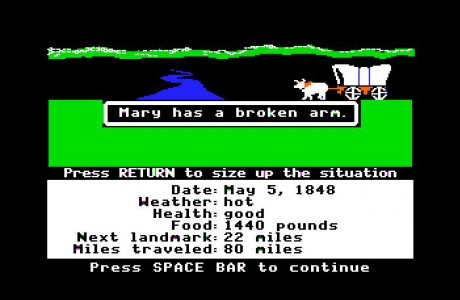 There are a lot of franchises being reborn this year on the 3DS, but the news that a new Oregon Trail title will be making it’s way to the system comes as a (welcome) surprise. Gamefly recently listed Oregon Trail for the system with a release date still unknown from developer Red Wagon Games. If you think about it though, this release makes perfect sense as 2011 is a very special year for the age-old franchise. 1971 saw the original inception of the classic tale for survival, making 2011 the now 40th anniversary of the game itself.

Now that we know it is coming, many questions can now be asked of just how this new version will work, especially with the 3D effects and system features. This also appears to not be a download but a full cartridge release, which clearly shows signs of a full reboot now in the works. If you remember, a port for the DSiWare for Oregon Trail was released a few years ago along with the many mobile versions we have seen since. For now though everything is pure speculation and we must now wait until more of an official announcement is made, so keep checking back as when more news drops, we will be sure to let you know.