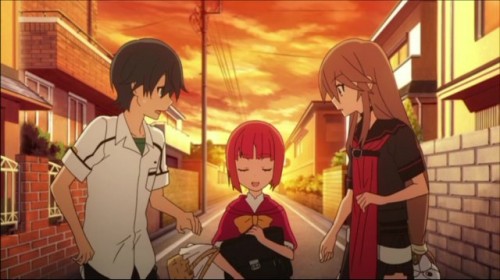 An anime that aired last summer in Japan by J.C Staff is Okamisan and her Seven Companions (Ookami-san to Shichinin no Nakamatachi) which is comedy, fantasy and romance series. The anime focuses mostly on a girl called Ookami who is a high school girl and Ryoushi, a very shy boy who has an extremely huge crush on Ookami. Ookami on the other hand has trouble trusting him and often punches him in true tsundere fashion. Ryoushi joins the Otogi Bank which is a “club” which does favors for various students in school in return for being able to call on these students at some point in the future.

The plot continues along these lines as various cases spring up around Ookami and Ryoushi which require their certain abilities. The action really steps up when Ookami’s dark past starts to come back to haunt her and Ryoushi must do his best to not only protect the woman that he cares for but try to break through the wall she has around her heart. Funimation currently holds the distribution license for the anime in the U.S. and has all of the episodes available for free viewing here.