Anyone who was an active gamer in the late 90s should be instantly familiar with the work of Oddworld Inhabitants, creators of Abe, Munch, and Stranger, along with the rest of the planet Oddworld. After the release of Stranger’s Wrath on the Xbox, OWI cooled off for several years. They closed their internal development studios, shelfed the fifth Oddworld title (The Brutal Ballad of Fangus Klot), and announced work on a movie to be released titled Citizen Siege. 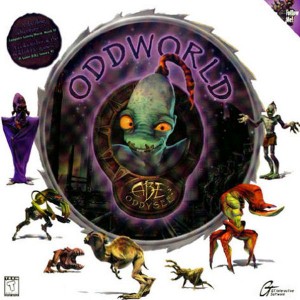 For years there was no gaming news out of OWI other than two games meant to coincide with the release of Citizen Siege. Those of us who grew up on Oddworld began to lose hope that we would ever return to that odd, odd place. Then there was a glimmer of hope all of a sudden. It was announced that developer Just Add Water would be putting out several Oddworld games, starting with ports of all of the past games to digital platforms like Steam.

Since then Oddworld Inhabitants has perked up a bit, waking up from its hibernation and groaning back to life. The OWI site has begun to be restored to some of its old vigor, including two new editions of the long-running, long-dormant Dear Alf series, a Q&A segment where Alf the mudokon answers (or mocks) fans’ questions. Abe, one of Oddworld’s most famous heroes, has even joined Twitter and updates followers on the latest happenings of odd.

It’s refreshing to see so much life on Oddworld after so many years of hopes fueled by sparse information and rampant speculation. Hopefully the digital releases of the Oddworld games, along with the HD remake of Stranger’s Wrath (buy it!) will spur interest in this classic franchise once again. Apparently, there are new Oddworld games coming our way so for now we’ll just have to be patient, and if you haven’t played the previous Oddworld titles yet, go download the Oddboxx on Steam. Right now. Seriously, go do it.