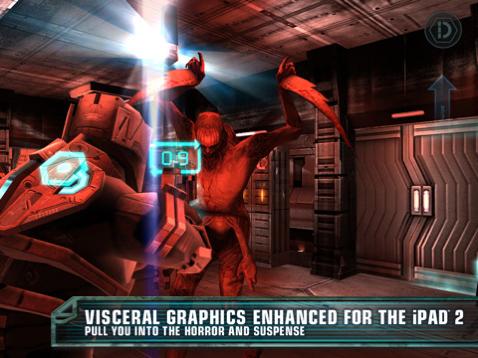 EA Mobile has released a new free update for Dead Space coinciding with the release of iPad 2. If you thought Dead Space for the iPad was good just wait till you play it on iPad 2. The new update, created specifically to utilise iPad 2’s new and improved hardware performance capability, which now improves the game’s overall graphics, visual and performance speed. The update also improves Dead Space by adding look sensitivity and Y-axis inversion thanks to iPad 2’s improved built-in accelerometer. “Dead Space showcases the power of the iPad 2 bringing the psychological thrill of this award-winning game to players in new ways,” said Travis Boatman, Senior Vice President of Worldwide Studios for EA Mobile.  “The faster core and graphics capabilities of the iPad 2 open up possibilities to reach new levels of quality in EA’s games never before seen in a portable device like this”.

Dead Space will be available for iPad 2 when the device launches worldwide on March 25, but if you’re lucky enough to already own an iPad 2 (I’m looking at you America) you can download the new Dead Space update right now. For more information on Dead Space check out review here