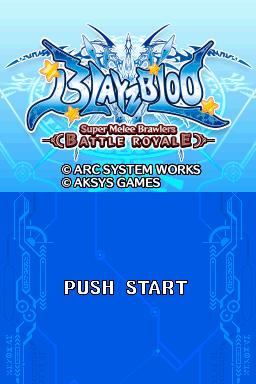 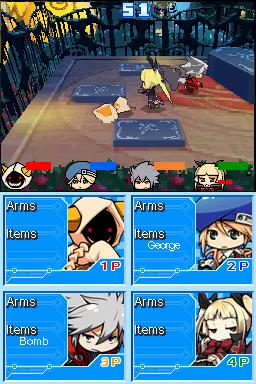 Feel like a little Blazybloo with your brawler? Aksys games has released Blazybloo: Super Melee Brawlers Battle Royale today for the DSi Store and you can purchase it now for only 500 DSi Points. This isn’t your standard brawler either because you will be playing with chibi versions of some of your favorite Blazblue characters! What is chibi you ask? It is a cute character form of more advanced models that do have less detail but will definitely have you loving them, see above for what the chibi versions will look like. You can even equip various items to use to cause devastation to your foes!

What should you expect if you happen to get this game?

Take on the CPU or up to 4 friends. Set the rules, select the stage and match type!

Good ol’ beat-‘em-up Life Match requires fighters to put the smack down on each other until your life meter is drained! Collect soba noodle points in Point Match by attacking other fighters or play snatch the panda in Flag Match; whoever has the panda when time runs out wins!

I don’t know about you but I’m loving the way this game looks. It’s like a mini smash brothers using Blazblue characters. With the different items and weapons to use, there looks like there is tons of fun to be had, especially when you consider the cheap price tag.

Sakura Samurai: Art of the Sword & More Slash onto the eShop