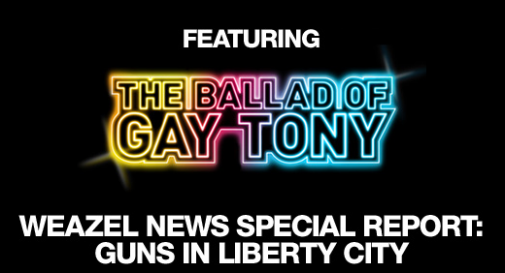 In this Weazel news exclusive, Weazel’s crack team of investigative reporters and former lobbyists cut through the filter of the mainstream media to find the paranoia behind the truth to a recent string of attacks in Liberty City, which has forced the LCPD into an escalating arms race. Our Weazel News expert demonstrates these fearsome new weapons including sticky bombs, advanced sniper rifles, automatic shotguns and exploding bullets; while recently discovered footage from a Liberty City tourist appears to show a rocket-equipped military grade helicopter known only as The Buzzard wreaking havoc in Liberty City airspace.