Zombie Runaway is a simple and fun game that is easy to enjoy for all gamers of all ages, for both hardcore and casual players. It’s fun, addictive, full of character and in short it’s just a blast to play. Fans of games like Doodle Jump, Angry Birds, and Bewjewled should definitely look into picking up this title. A must have for anyone wanting a enjoyable quick game to waste time. 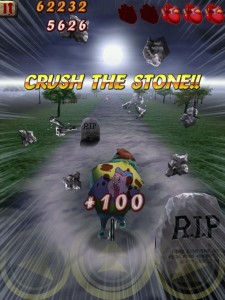 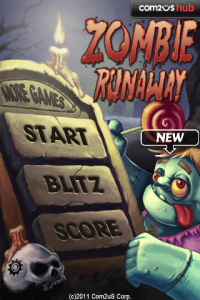 Players take control of ‘Chubbie’ a fat zombie who happens to be the last zombie alive (or undead?), and is being chased by humans. To survive you must run away from them in a giant graveyard. The path is never ending, and the further you get the harder obstacles become, and you must get through it all without being killed….again. The farther you run the more points you get, trying to achieve a high score.  There are three buttons that appear on screen: left, right and jump. They’re simple, responsive and work well. It’s very pick-up-and play and it’s learning curve will last about half a second at the most. Collecting coins gains you extra points and jumping on a ‘booster’ will make you invincible for a short burst of time, allowing you to run over tombstones and other obstacles for bonus points. Achievements can be gained and they can unlock selectable rewards which are human weapons stuck into your skull, that get you extra points and similar advantages while making the protagonist look a little humorous. There really isn’t much more to say here other than it becomes very addictive trying to beat high scores and seeing how far you can it. 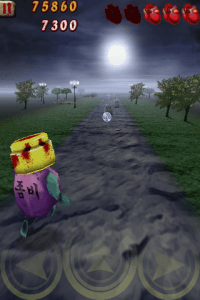 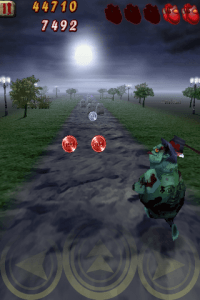 Further emphasis on this is seen in the ‘blitz’ mode, which has a timer and when it goes up it’s game over. What makes this extra fun is that the time can be extended, so you really get the feeling that your fighting/running for your life here. To make things better there are plenty of connectivity options, with scores to post to facebook and the com2us hub, so you really get a nice feeling of competition that shows much potential for this game to take off and gain a rather large fan base. Levels are quick and fun, so if you have a minute bus ride or something you can just bring out your iPhone quickly and do it there, or a quick game while your in the bathroom, or a quick game while waiting for your 2 minute noodles to cook or whatever, which makes it very ideal for casual gamers and a nice game to have in your pocket. The only real flaws it has is that it lacks depth, but it’s a game that doesn’t require depth. It would be nice though if we had other areas or levels to run through other than a graveyard. Hopefully in the future com2us will consider updates with other levels or themes, similar to how Lima Sky does with Doodle Jump. Zombie Runaway also has a nice story to it as explained in it’s press release and in the app store, but it’s a shame its not explored or even mentioned in the game itself. It would’ve been nice to see something about it, but perhaps it wasn’t in the interests of the developer and maybe they wanted to keep the game simple as it is. Either way it doesn’t effect or change the gameplay at all.

Zombie Runaway contains some nice scenery and some nice character models. Textures look great and character design is cute and well done. Same can be said for the artwork accompanying the menus and such, as they are bursting with style and look beautiful. Audio on the other hand ranges from good to great, with the soundtrack being a bit of a mixed bag. In game its upbeat and fun, and in the menu’s it’s a smoother, easy going beat. There are a few burp and fart noises heard in the main game soundtrack which feel a bit too childish and a bit cheesy, but it still is a decent track. Sound effects are good and they work well within the game. 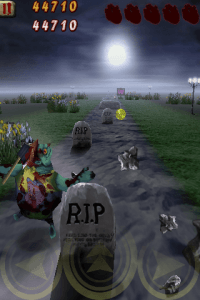 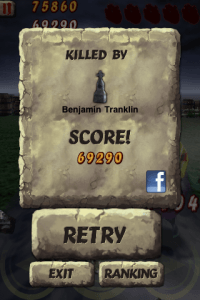 Zombie Runaway is full of charm, style and character, you can play through a level in short periods of time, you can compete for high scores and you can connect with your friends with ease. It’s simple but not too simple, addictive and fun. It’s also less than $1.50 in the app store, so it’s great value there. It’s not perfect, and it won’t be your most favorite game you’ve ever played in your life, but players will love it in short bursts and it’s a great game to play to kill time. It may be simple and some may criticize it for it, but it’s simplicity is what makes it so fun to play. A must have for high score junkies and fans of casual games.