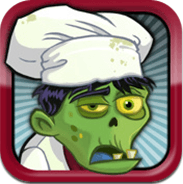 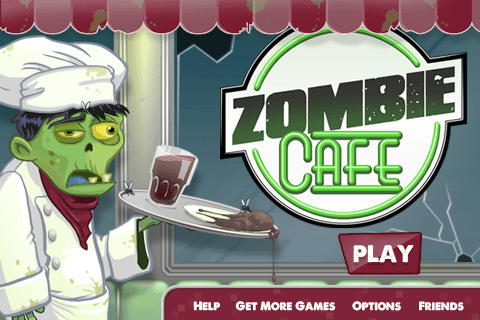 Through the mist of the app store emerges another restaurant/café themed game for the iPhone, iPod Touch and iPad. While previous time-based café management games are rather weak themed, Capcom Interactive, Inc.’s latest game, Zombie Café infects the genre with a zombie theme. While there are a number of zombie themed games, such as Zombie Farm, Zombie Café uniquely blends the elements that make zombie games and restaurant management games so enjoyable.

As a newly opened restaurant, you are lacking in a low payed, yet dedicated work force in which to serve your customers. In order to create a reputable business, you need to first infect patrons who visit your cafe to convert them into zombies. This is where Zombie Café differs from the number of real-time based cafe and restaurant simulation games available for iDevices. While it may seem a little uncharacteristic for a zombie to work in a cafe, Capcom have combated this by giving the zombies a short enough attention span to attack customers (in true zombie nature) when they become restless. If the zombie becomes too bored they will begin to attack the customers and cause your café’s star rating to decrease. In order to prevent this you need to give the zombies adequate rest. 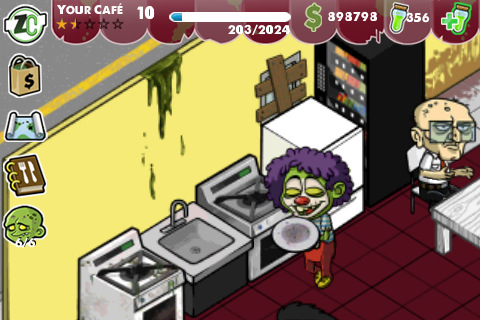 In Zombie Café you are required to learn new recipes and increase the level and size of your café. Players also have the option to redecorate as they see fit. Despite the clean look available to players in terms of decoration, the food options would defiantly not pass a health inspection. Recipes like ‘tumor melt’ and ‘dishwater soup’ give the game a great sense of character and add to the somewhat black humour of the game. Each meal needs a different amount of time in which to cook before they can be served to the eagerly awaiting customers by a staff of “hired” zombies.

While the management of a cafe employed solely by zombies may become a little repetitive, the ability to thwart (at least temporarily) your competition by sending an armada of zombie warrior/waiters adds a great new element to the mix. While the zombie raid is not unique to Zombie Café (also present in Zombie Farm) I find the management of theses raids a little less frustrating than other games. Rather than your zombies dying and having to be regrown, Zombie Café employees need time to reanimate. While this is still time consuming I prefer this method as it lacks the need for harvest after a certain time frame. By raiding other Cafés players can boost their level, earn cash, toxins and new recipes while destroying other cafés all at the same time. During the raids, zombies attack and chase off customers from other cafés, or battle against the chefs and waiters. Once a zombie has defeated a human a black censor bar covers the body before it turns to bones and is eaten by your victorious zombie. This is just another clever little element to the quirky humour of the game (as well as to tone down any violence). 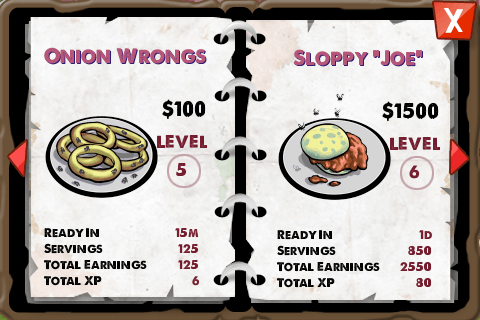 Graphically, Zombie Café pays attention to detail in a cartoon like fashion, which adds to the overall fun of the game. The avatars in Zombie Café are well designed and add to the overall aesthetic of the game. There are a few different types of customers who enter the café, from punks to politicians, to footballers and retirees. Each of the different types of characters are uniquely designed (although some clothing cross-over character types) and have different attributes according to job (or lack of job in some cases). After infecting different customers their appearance changes slightly to make them more zombie-like, generic zombie alterations such as ripped clothes and more apocalyptic hairstyles. Zombie Café also plays particular detail to the design of the awful meals served in your café, from cockroaches in the ‘zomlet’ to eyeballs encased in the ‘gello mold’.

Zombie Café utilises a minimalist approach to sound design, using a jazzy musical background and cooking noises to emphasis the café setting. A few audio favourites of mine are the zombie noises that come with clicking on an employee or that come with the push notifications. All the audio elements work well together to compliment the thematic and graphical aesthetics of the game. 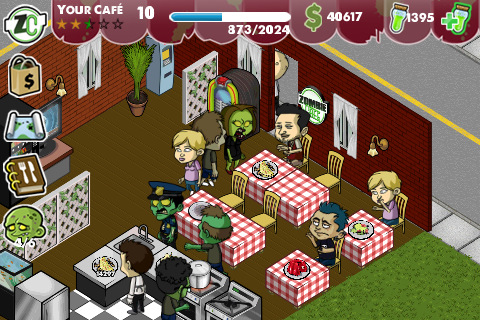 Overall, Zombie Café is a pretty fun game. The easy to use interface and the dark sense of humour that can only come from zombies cooking brains (and a whole bunch of other body parts and bugs) make the game a winner in my books. The necessary waiting period in games such as Zombie Café is a downfall for me. I am constantly setting dishes on the stove to cook only to forget about them two minutes later and return to a burnt meal. The push notifications are a great feature within the game that allows my wandering mind to serve my prepared meals. While this isn’t unique to just Zombie Café, the sound byte of or ‘brraaiinns’ is a great enticement to get back into the Zombie-Café business. The zombie theme really adds a new interesting element that blends uncannily well with the food service industry. Unlike other zombie based games, Capcom have remodelled the zombie elements to include infection as a means of zombifying, as well as providing a well designed and manageable invasion function paired with awesome zombie-designs delivered with a great sense of zombie-humour.