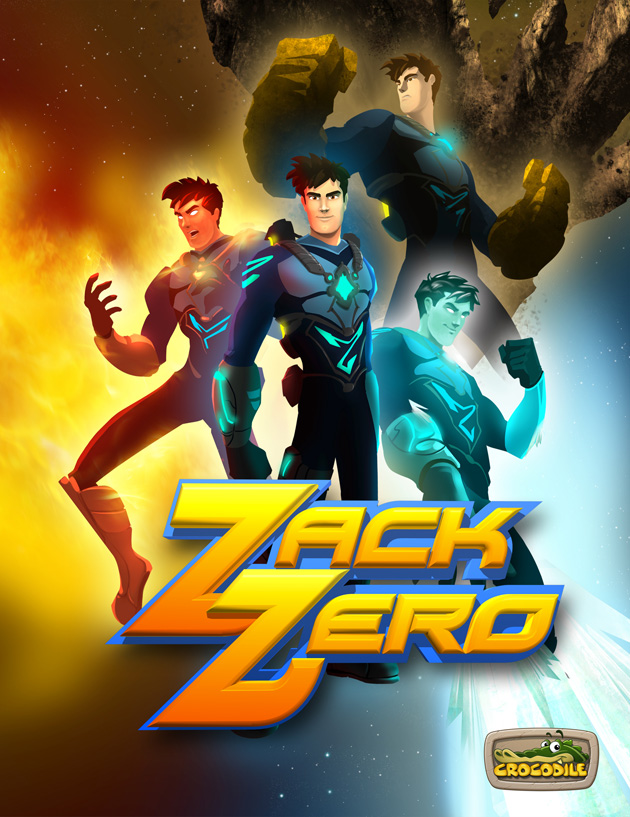 The first effort from Indie developers Crocodile, Zack Zero is a cartoon style action platformer that sees the eponymous hero on a quest to save his girlfriend from the clutches of the evil Zurlog! Downloadable only on the PSN, the Spanish developers aim to provide an experience that is highly entertaining and easily accessible for all.

The game is 3D in the same sense as Little Big Planet, working primarily on a 2D plane but taking jumps into the third dimension. The platforming comes complete with plenty of enemies to beat up, so this and the cartoon style will no doubt appeal to a younger gamer.  It has a few issues here and there and definitely shows its first timer roots, but if you stick with it there’s a good enough game here to warrant some attention. 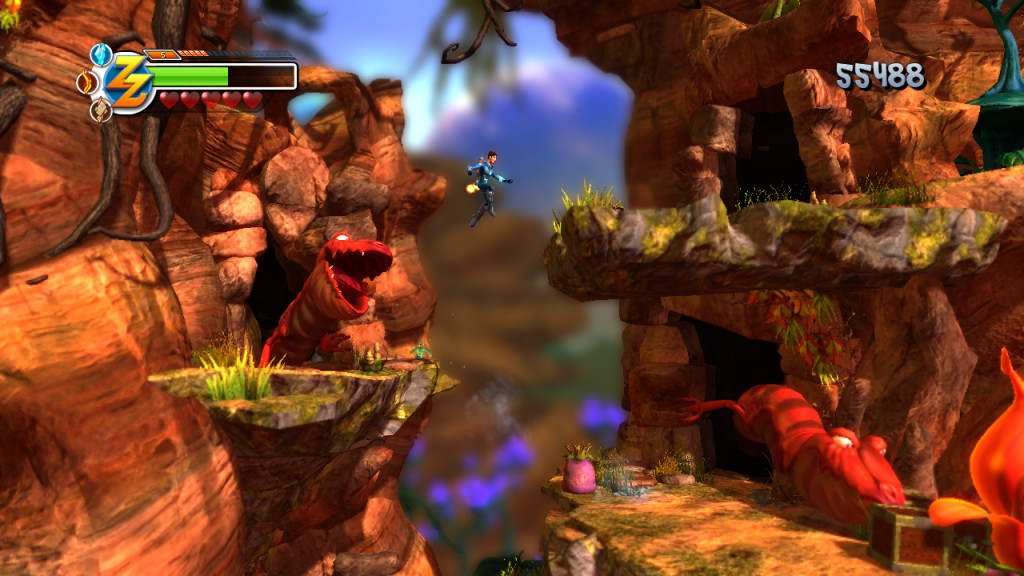 Zack Zero is a hero, a hero with an experimental suit. Starting out fully levelled up, the suit has four different ‘modes’ that give Zack all sorts of different powers. In flame form he can move faster, propel himself through the air and toast enemies with jets of flame. The rock form (Zack Zero’s Thing to its Human Torch) is much slower but can power through breakable objects. As an ice man Zack can slow down time and freeze blast his enemies, leaving normal mode with a standard blade. Each form uses up the suits power at different rates, neatly limiting the more powerful abilities. The suit can be recharged by collecting gems and energy rich bugs dropped by defeated enemies.

Zack is unlucky enough to lose all his powers at the end of the first stage, making gem and bug collection mandatory if he wants to regain his skills. This forms the games level up system, which is sadly hampered by the fact that you’ve already used every power Zack is going to get. Regardless the elemental powers are fun to play around with, even if the combat system has a few quirks that stand in the way of perfection, but that’s for later.

Gameplay is a well balanced mix of combat and platforming that sees Zack power his way through 8 levels in order to rescue his girlfriend. There’s a surprising amount of gameplay here for a downloadable title, with a good ten hours on offer, or more if you have a completionist streak. The levels are well designed and flourish the deeper into the game you go, providing a good learning curve and a genuine sense of space with multiple routes. This makes finding Zack Zero’s hidden treasures an appealing option that will add some more depth to the game for experienced gamers. The younger crowd are well catered for with a generous hint system, and back tracking and repetition are generally avoided thanks to efficient checkpoints. 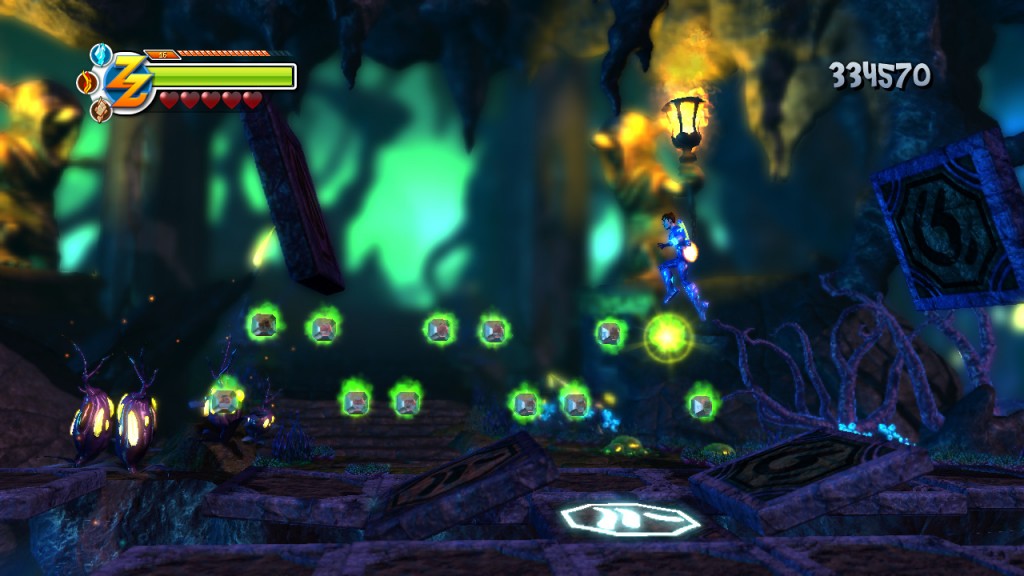 Apart from some issues with depth the platforming is solid, and does a good job of using all of Zacks various powers- one advantage of the set levelling up. There are the usual switches to flip and boxes to drag, with environmental hazards tailored to the environment. The depth issues are less frequent than seen with the combat, but Zack will still occasionally drop through a platform or miss a jump to plummet to his death because the game has put you in the wrong layer.

The combat. Now this is where the game falters a little, and it’s largely down to that tricksy third dimension. Enemies often attack in large numbers, armed with both melee and ranged weapons. Zack cannot block anything, so is prone to dying extremely quickly. This becomes even more frustrating when you realise that enemies can move in and out of the background/foreground, often meaning you have to be standing in a very precise spot to let the auto aim deal with them, if you can even tell the difference. Attacks often bypass the nearest enemy and hit the one a safe distance away, flamethrower/ice blast effects block your view and mobs of enemies (sometimes even offscreen) can deplete Zack’s health in a flash. Enemies can leap from the background in mid attack. Sub bosses are repeated far too often, and the despite the fact that you can’t get past the main bosses they can still back you into a wall and kill you. Difficulty is fine, but this just feels like the outcome of a battle is down to blind luck, which more often than not is not on Zack’s side.

There’s just too much inconsistency to the whole thing. Are ledges grabbable or not? Do my attacks hit enemies or not? Is that platform in the same plane as I am? Is this boss going to back off or just squish me against a wall? Sometimes yes, sometimes no. It makes Zack Zero incredibly difficult to judge: when there’s no combat going on the game is really enjoyable, when there is you run the risk of being ripped off. 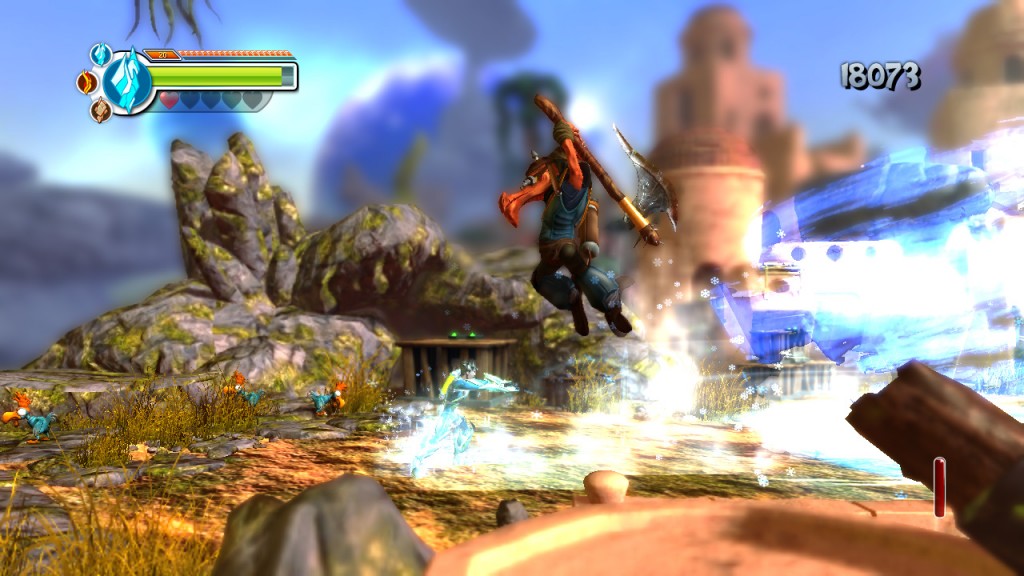 Zack Zero feels so much like a kids cartoon that I was convinced the internet was lying to me when Google revealed no such thing. The brightly coloured 3D graphics and character design bring something like Ben 10 to mind, and the whole presentation is certainly skewed towards a younger audience. The game has a light sci-fi tone to it, and the levels cover a nice selection of varied landscapes from a bug infested wasteland to the inner workings of a sinister factory. The levels have a lot of dynamic detail and for a downloadable title Zack Zero is visually very impressive – think Ratchett and Clank. The music and effects throughout are excellent and from the off gave me a Tim Burton/ Alice in Wonderland vibe.

The cut scenes are very simple comic style animations, with all voice acting handled by a narrator so bland I couldn’t quite figure out if it was intentional deadpanning or not. Zack himself is a bit of a blank slate, and with a cheesy voiceover could have been more than just a non-entity in a silly suit. The elemental powers all look great though, with light effects for the fire form and a frosty haze around the ice one.

The game does have its share of technical hiccups – I experienced animation lock ups in every single boss fight and a complete freeze or two during general play. Transitions between areas are clunky and the whole thing just feels a little unpolished – understandable given that it’s a first release. Camera angles can lose sight of Zack and bits of the environment that pop into the foreground can hide small enemies that in groups can shred your health in a hurry. Again most of these problems are most obvious and damaging during combat situations.

Zack Zero is a strong effort for a first release, but in a world full of high quality indie platformers it’s difficult to ignore some of the things that make it less than it could be. There is a great game in here just waiting to get out, but sadly every time I started a session it felt inevitable that some little thing was going to come along and push me away. I would get into the flow of the game and then suddenly fall through a platform, or be repeatedly killed by a mob of goons landing cheap shots. Things would nag and nag until that unavoidable moment where the controller hit the sofa.

As the game progresses these moments take a bit more of a back seat, and there is a lot of content on offer too. Fans of the genre should give Zack Zero a fair shot – I did want to keep going back to it, and that’s a sure sign that there’s something here worth gambling on.