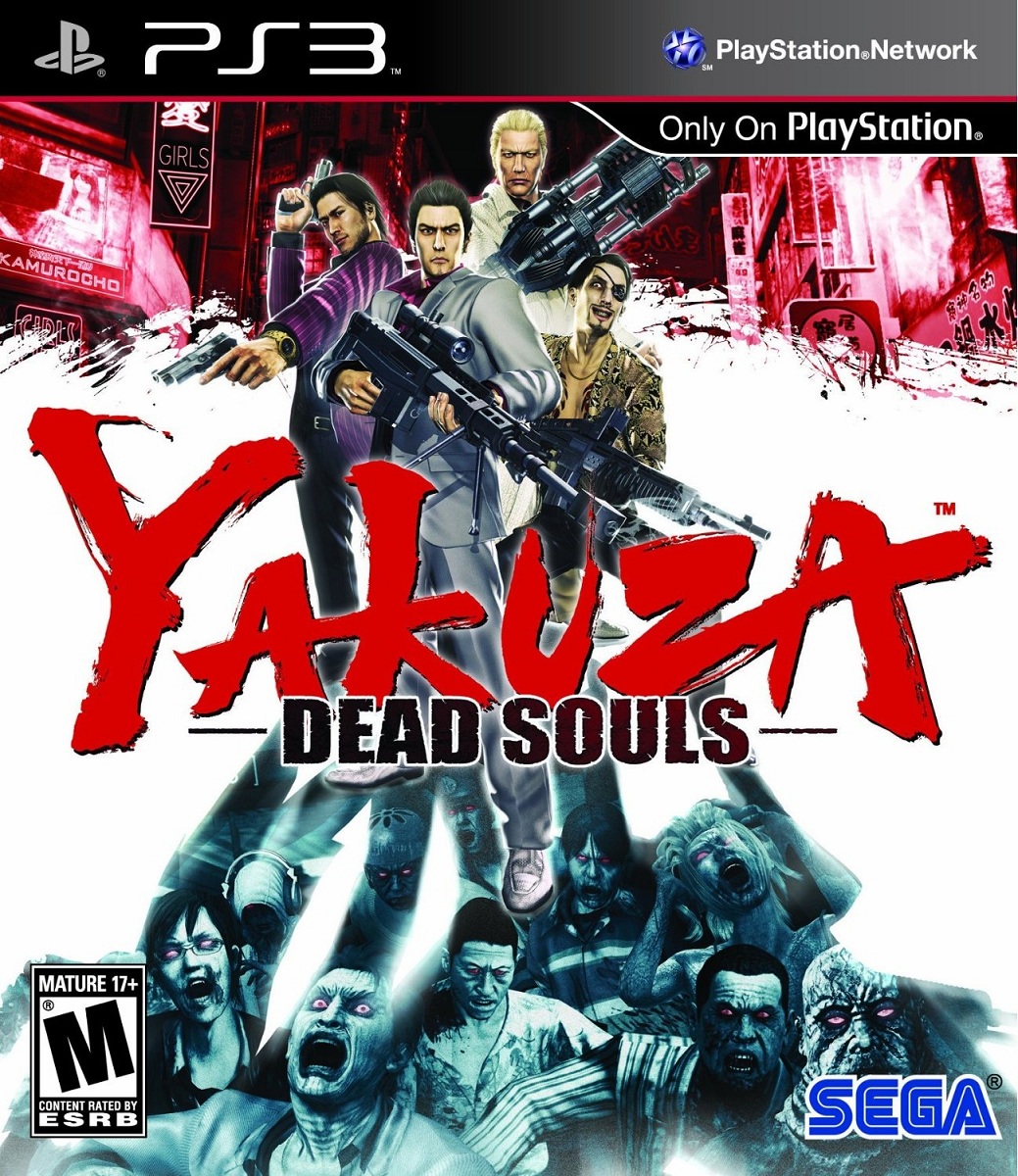 Overview:
Even when zombies first became popular upon the creation of George A. Romero’s “Night of the Living Dead,” they never reached such a high level of popularity as they do right now. There are countless movies created involving zombie outbreaks, tons of books and even more video games offering everyday people a chance to fight against the living dead in numerous ways.

However while most of these zombie outbreaks are unique in their own ways, none of them have ever had to face off against the hard-boiled gangsters that make up the Yakuza. While Sega’s Yakuza series has always been one that offers a brilliant storyline with plenty to do, however this time around Kamurocho has been infested with zombies in Yakuza: Dead Souls. Does this spin-off on the standard Yakuza experience with a sprinkle of zombies offer a compelling experience or one that should be left to rot?

Story:
It is clear from the on-set that Yakuza: Dead Souls is going to be different than anything previously experienced by the Yakuza fanbase. The Kamurocho district has become infested with flesh-hungry zombies and the infection has spread so rapidly that the only way to contain it was for Japan to deploy the JGSDF (Japan Ground Self-Defense Force.) However their inability left only one solution, to wall off the infected areas of the city in a quarantine zone. 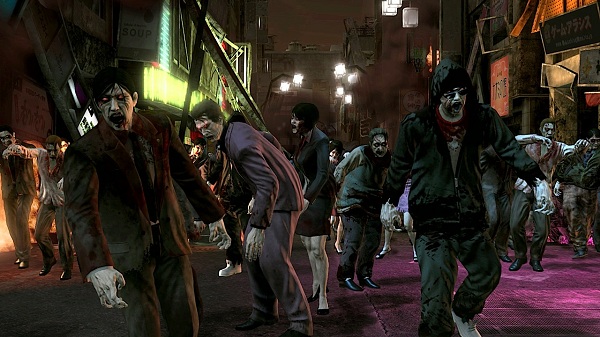 Though as one may expect, zombies always find a way to reach the populace and there are only four men left who can try and turn the undead tide and possibly save the day. My personal  favorite, Shun Akiyama from Yakuza 4, longtime main character Kazuma Kiryu, machine gun arm toting Ryuji Goda and the slightly psychotic Goro Majima must work together to try and save the day. With zombies and various Yakuza members facing off, how deep could this story possibly be?

While the basic premise for Yakuza: Dead Souls reads like a bad B-Movie plot, it thankfully goes above and beyond the call of duty and provides a compelling experience that demonstrates that a zombie game can actually have an interesting and well developed storyline. Whereas most zombie games tend to be generic and repeat plenty of clichés, Yakuza: Dead Souls’ pedigree for having an intricate storyline with plenty of drama makes for a stand-out zombie story. 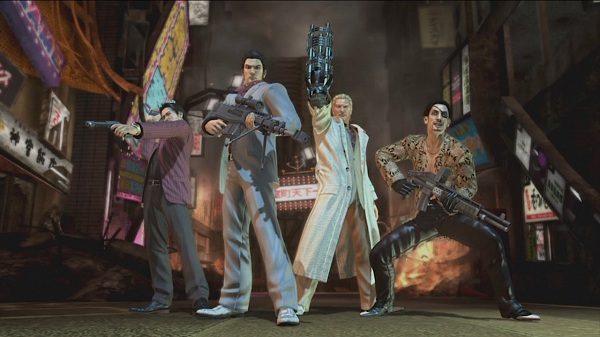 To make things even better, there is plenty of comedy sprinkled throughout the entire game. Practically none of the comedic situations or jokes fall flat and Yakuza fans will love every second of it. Those who have never touched  a Yakuza title won’t be missing out on much either as there is only a minimal amount of knowledge needed about past titles to get the most out of what Yakuza: Dead Souls’ story has to offer.

Visuals:
One of the main ways that the story is told is through various cut-scenes featuring detailed characters with expressive faces. These cut-scenes are enjoyable to watch with their high level of production, which is great because there are plenty of cut-scenes to watch as you progress through the game.

Kamurocho has obviously seen better days and this is most evident whenever players switch from a quarantined zone full of destruction and zombies to the normal un-infected segments of the district. The zombies you are facing off against are also varied well enough with multiple versions of simple zombies and plenty of outrageous special zombies to face off against. 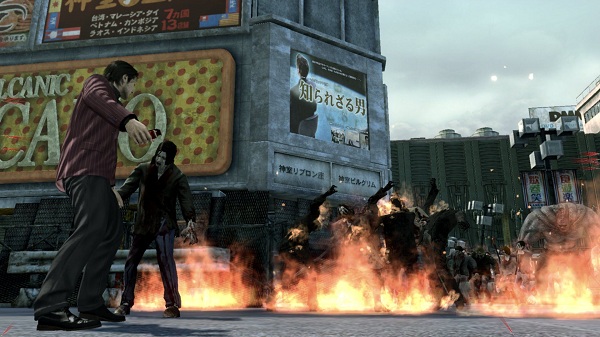 However there is an issue when it comes to the amount of zombies you can experience at any given time. Unlike most zombie games, Yakuza: Dead Souls experiences slowdowns in frame-rate whenever a mob of zombies is encountered and the player begins fighting them. This is even more evident whenever explosives are used as it will bring the game’s pace nearly to a halt until it catches up.

Audio:
Now anyone who has played a Yakuza game in the past should understand that Yakuza: Dead Souls offers no English voice track, however most fans will obviously prefer it that way. Instead we are provided a cast of characters who reprise their voice actors from past games and offer us the same high level of quality one would expect from the Yakuza team.

Gameplay:
Yakuza: Dead Souls is quite different from your standard Yakuza game in a number of ways, especially right down to the core. Rather than focusing on brawls with fists and various weapons the title focuses heavily on guns. To help spice things up, each of the four characters have their own special weapons such as Goda’s Gatling gun arm, Akiyama’s dual wielded pistols and Majima’s shotgun. While these are the characters’ signature weapons, up to four different guns can be equipped at any given time and you can also apply various upgrades to any equipment you buy.

There is a bit more to Dead Souls’ combat than just shooting as players can still take on the undead with their fists as well. Players can still pick up various items around the environment and use them to return the undead to death. This also means you can run into combat with a garbage can or something similar and take out zombies as well, though there are even more crazy weapons to use but that is for you to find out. This provides an enjoyable and exhilarating option for zombie killing outside of using guns, which is a great thing because the shooting mechanics in Yakuza: Dead Souls are severely lacking. 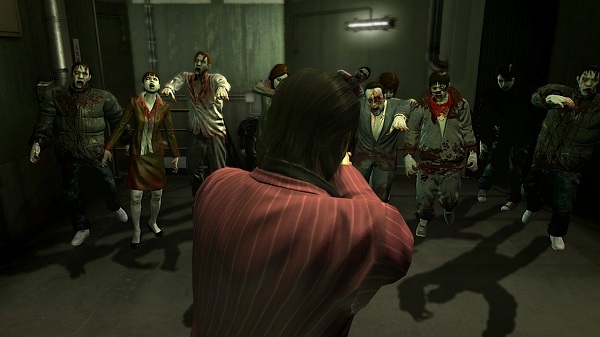 Before I go into how simple and bland most of the shooting mechanics are, there is one mechanic that is not only enjoyable but provides a bit of cinematic flair to your zombie slaying. As you deal out damage and kill zombies you will fill up a Heat Snipe gauge. When it is full you will be able to use a special attack that will target an explosive item in the environment to cause a nice explosion that will take out multiple enemies. These explosives can range from gas cans laying around, to a broken down motorcycle or even grenades tossed into the air by a companion.

While that mechanic does make things exciting from time to time, the standard zombie shooting appeal wears off very quickly. You see, Yakuza: Dead Souls uses a third person shooting mechanic and allows players to aim with a simple press of the back left shoulder button. However aiming is practically useless, as well as clunky to use as there are much easier options available. The reason for this is the fact that there is no reason to even aim properly besides just facing in the right direction. 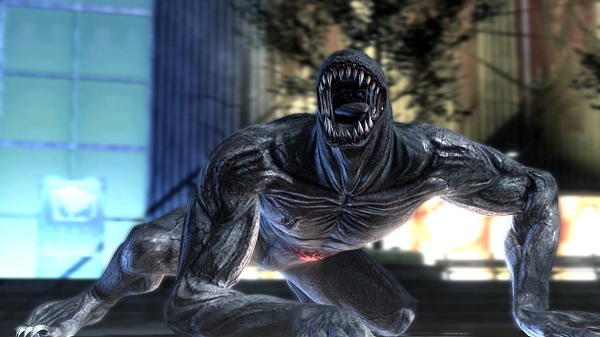 While some may find it easy, this new mechanic takes nearly all of the difficulty out of the game when facing normal zombies. It is so easy in fact that players can simply run around outside of aim mode and keep pressing the shoot button and your character will automatically aim at the closest zombies and take them out while still running. Those concerned about their accuracy or even headshots need not worry as nearly all the shots will hit and you will even pull off headshots from time to time, making combat too simplistic.

The only time the combat is spiced up is when a special zombie or a boss is encountered. Players can encounter special zombies (a few of which bear striking similarities with other games’ special zombies) which may require only headshots to take down or can summon more zombies until they are defeated. The bosses are also very enjoyable to face as they are obviously a bit more difficult and can provide a challenge. 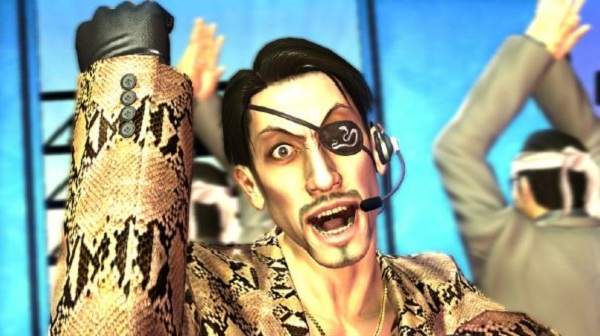 When you aren’t facing off against the various undead you can still spend plenty of time doing various side-quests and mini-games in Kamurocho. Players can take on a slew of side quests that range from just zombie fighting, to fetching items, some escort missions and even some crazy ones that will give players a good laugh. Rarely do you see variety in side-quests, let alone ones found in a zombie game but Yakuza: Dead Souls will give you plenty to do on the side. Of course you can also spend some time gambling at a casino, going to karaoke or spending some time with some Hostesses if you fancy some non-undead company.

Overall:
Yakuza: Dead Souls offers quite a hefty amount of playtime for a game focused around zombies, with the main story reaching 14+ hours of gameplay and plenty of side-quests and other distractions to keep you busy. Rarely do we see a zombie game with a great storyline however if any series could pull it off, it is the Yakuza series. Some may be a bit put off by the simplistic combat and the occasional slowdowns but there is still a great looking game beneath all of that rotting flesh.