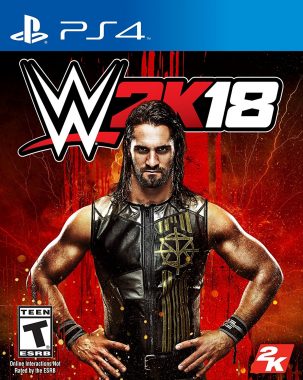 Once upon a time, wrestling fans had a smorgasbord when it came to getting their favorite event in the digital world. That was once upon a time, though. Ever since this generation of consoles began (2K15 being the first I am referring to), the entire franchise that used to be the centerpiece video game experience for the genre has turned into a lonely wreck, filled with glitches, bugs, and a sloppy system – hidden away with clever marketing and a top notch roster. That may sound harsh, but for a fan that has been around for every high and low, I know what kind of product that this company is capable of. Being the only published WWE series left, 2K have a lot to live up to, and the past few years have left me looking for past alternatives to get my wrestling video game fix. 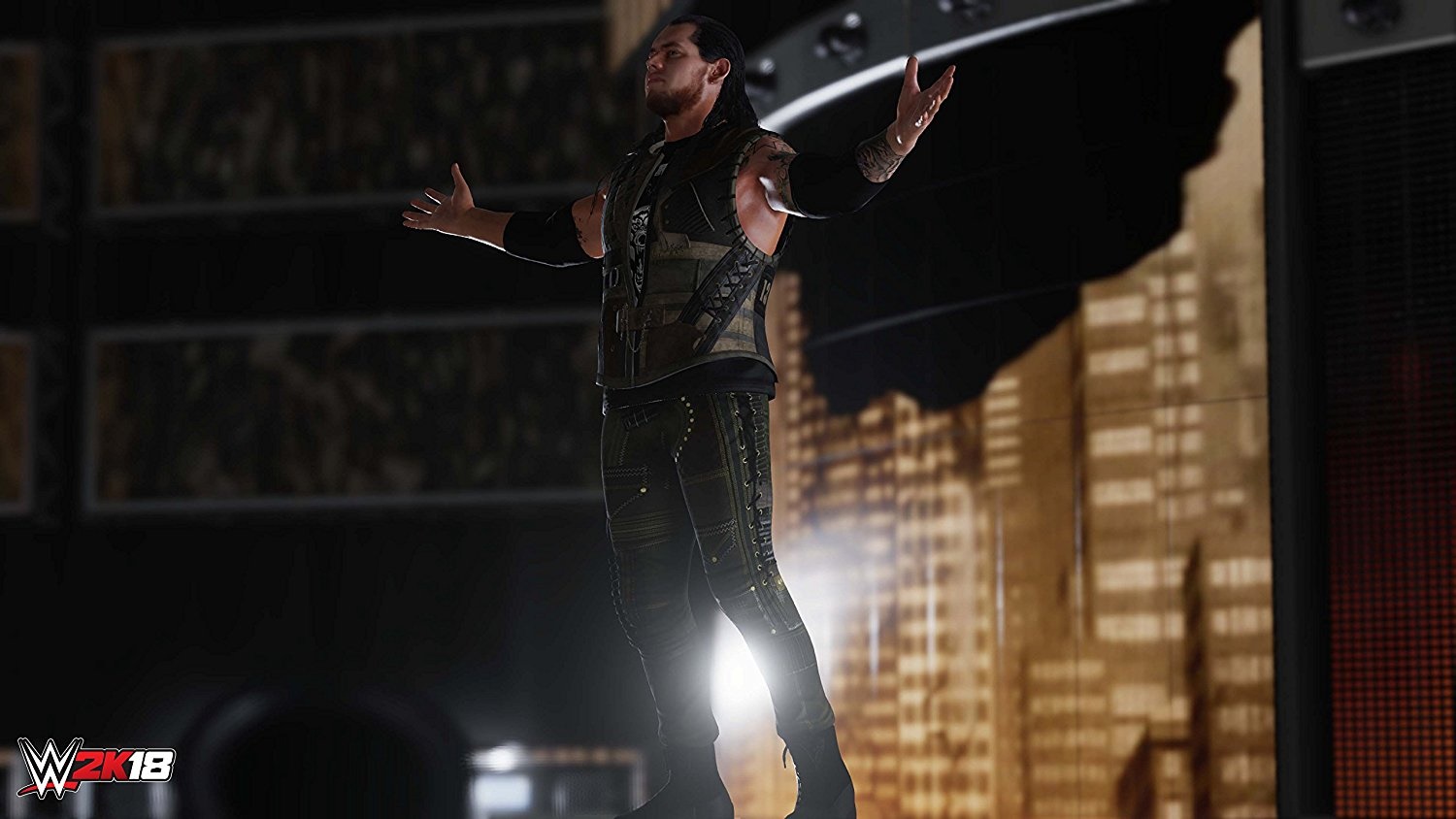 Prior to its release, I was not even thinking about WWE 2K18. How do you care about something that has burnt you so many times before? With the last decent outing being back on a previous generation (2K14), I did not even go into this experience with even an ounce of excitement. Funny how optimism keeps us coming back, though.

Well, I guess since we have a story section in our general template for every title, I can use that opportunity to speak about MyCareer mode, which has returned with some new updates. Players take their creation into this mode and have to work their way up as either a Company Man or a Fan Favorite. Yes, it isn’t flashy, but in my opinion, more effort was put in to make the player feel better connected with the WWE Universe right off the bat, with more interaction with the current roster. 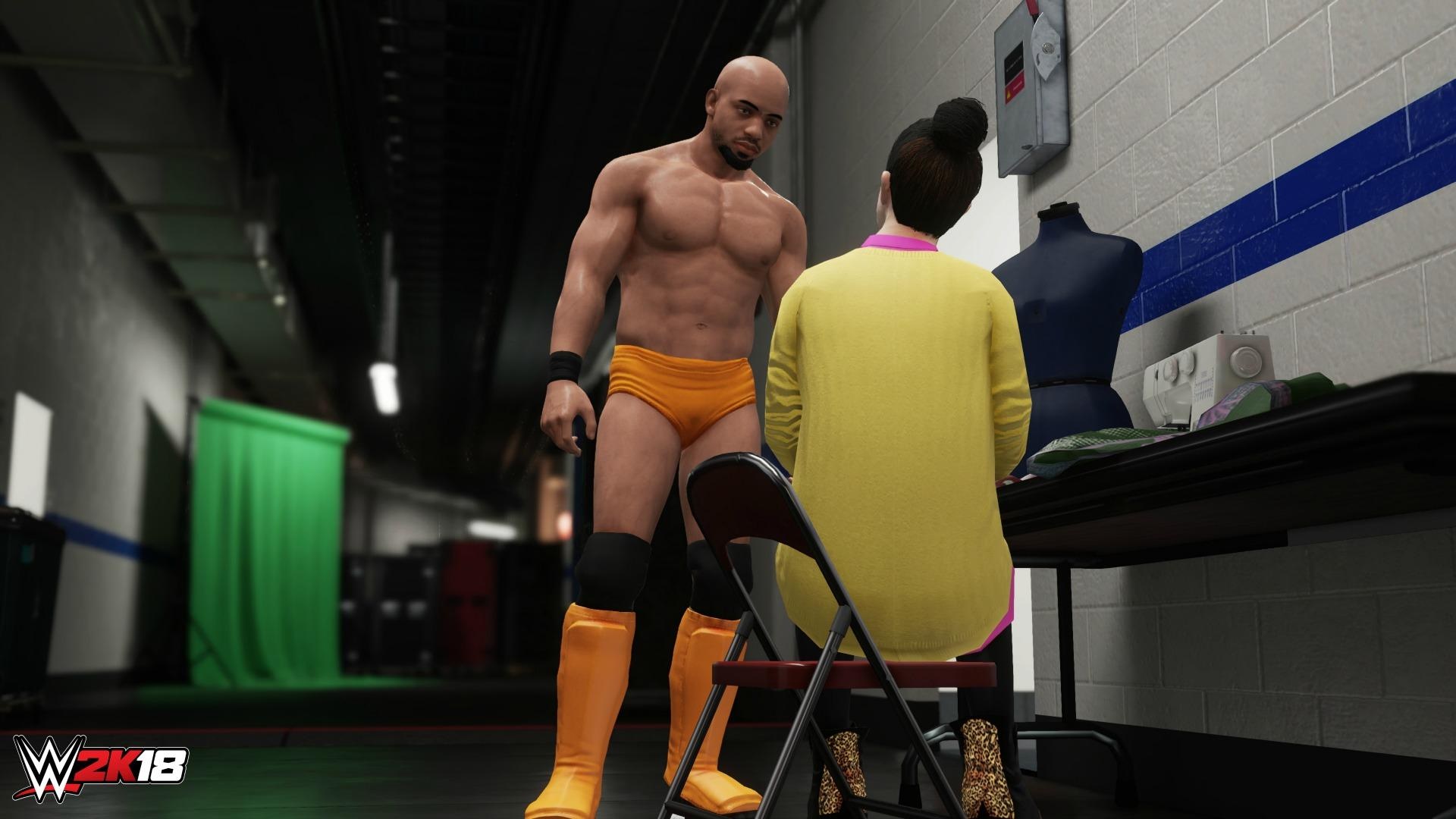 Players can also now roam the backstage area, where they are able to make allies and enemies through small conversations with WWE Superstars backstage. Think WWE: Smackdown Just Bring It. It is the same kind of system, but without much depth to it. While it certainly is nice to roam the backstage area, a lot of Superstars do not even have voice acting or any actual effort put into making their interaction meaningful. That may have been fine in 2001, but in 2017, it is definitely something that feels rushed and more like an afterthought. The matches themselves in this mode are fine, but objectives you must complete before moving on drag down MyCareer, as it is nearly impossible to achieve victory when broken AI stands in your way from standard objectives. I will touch more on the AI in a moment, but due to the core system’s longstanding shortcomings, the amount of entertainment a player will be able to get out of it honestly comes down to their patience and luck.

Road to Glory is a bit of an extension to MyCareer, but takes your MyPlayer online, where they will be able to compete with other players, and attempt to make it into a Pay-Per-View while fighting for upgrades amongst others. This mode is a great idea, and something that with a bit more polish and attention could lead into something far greater, potentially even worthy of its own single release. Remember that WWE MMO that was cancelled? I kind of expected it to be sort of like this.

Now we can speak about the core game, as in my opinion – if the matches are not at least fun, the game can fall apart (see last year). Luckily, there is something different about the matches themselves this year that at least makes exhibition mode fun to play. The first new addition is a brand new physics system that allows players to carry opponents through special maneuvers in order to throw an opponent out of the ring or into an object. Most (not all, however) moves work again when it comes to smashing an opponent against an object. I know, a lot of past games had this feature, but the last few have excluded the ability to properly interact with weapons, so seeing the feature back is a pleasant sight. It still is not perfect as a lot of moves do not have proper connection animations with anything that should – but the train is at least back on the tracks. 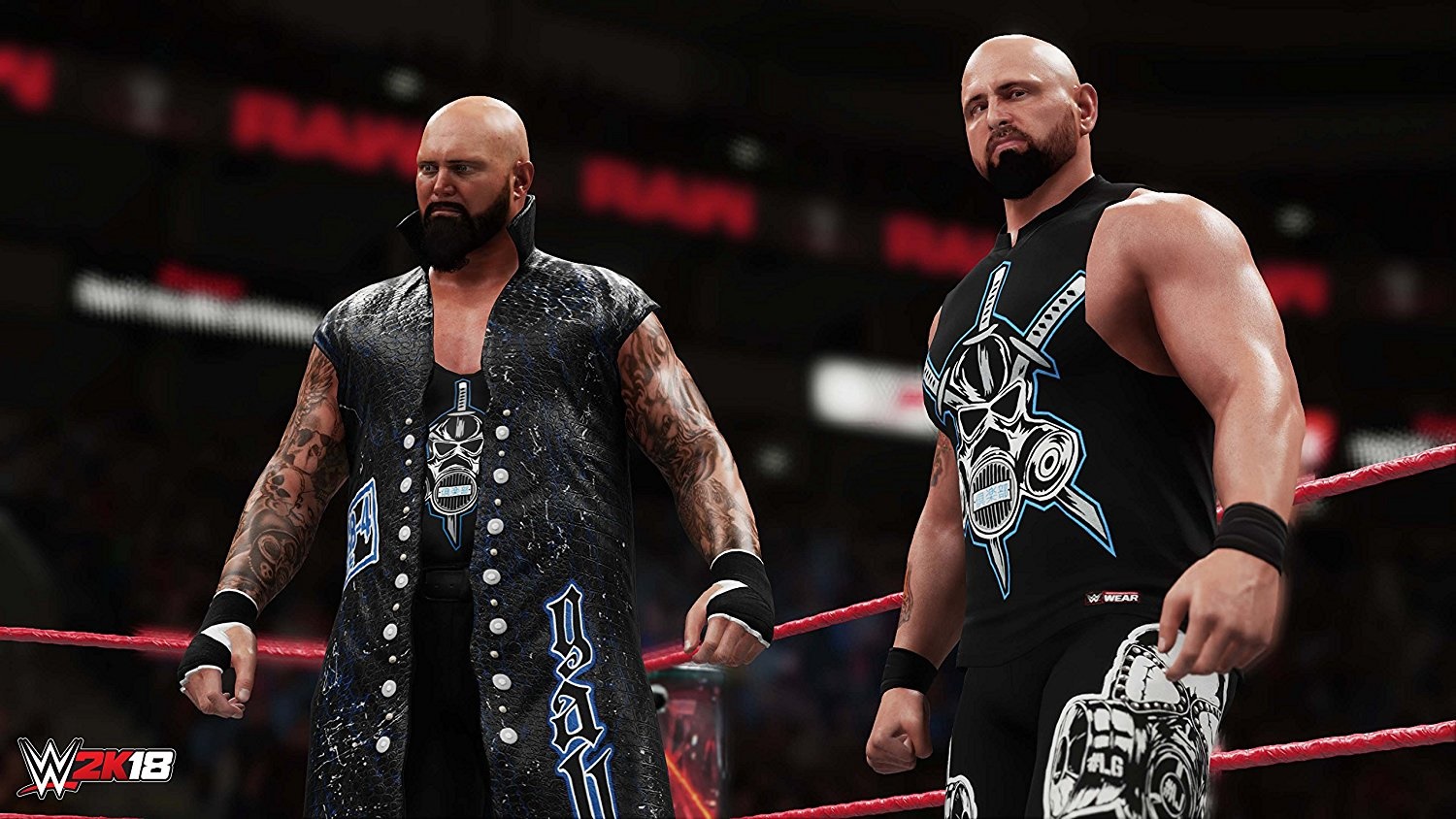 Going back to the whole “power moves” thing, again, this is a feature we first saw in the 2007 installment, and while it is a bit annoying to have to praise older additions, these moves make Royal Rumbles a blast to play and make TLC matches far more satisfying. A lot of the mini-games incorporated now seem to feel slightly improved. Eliminations in an over-the-top scenario have a lot more variety than a simple mash fest, and grabbing a briefcase is also a bit more polished this time around. That said, kicking out of pins and escaping from submissions still feels broken. It is like there is still a slight input lag, making online timing a very difficult obstacle to look past. 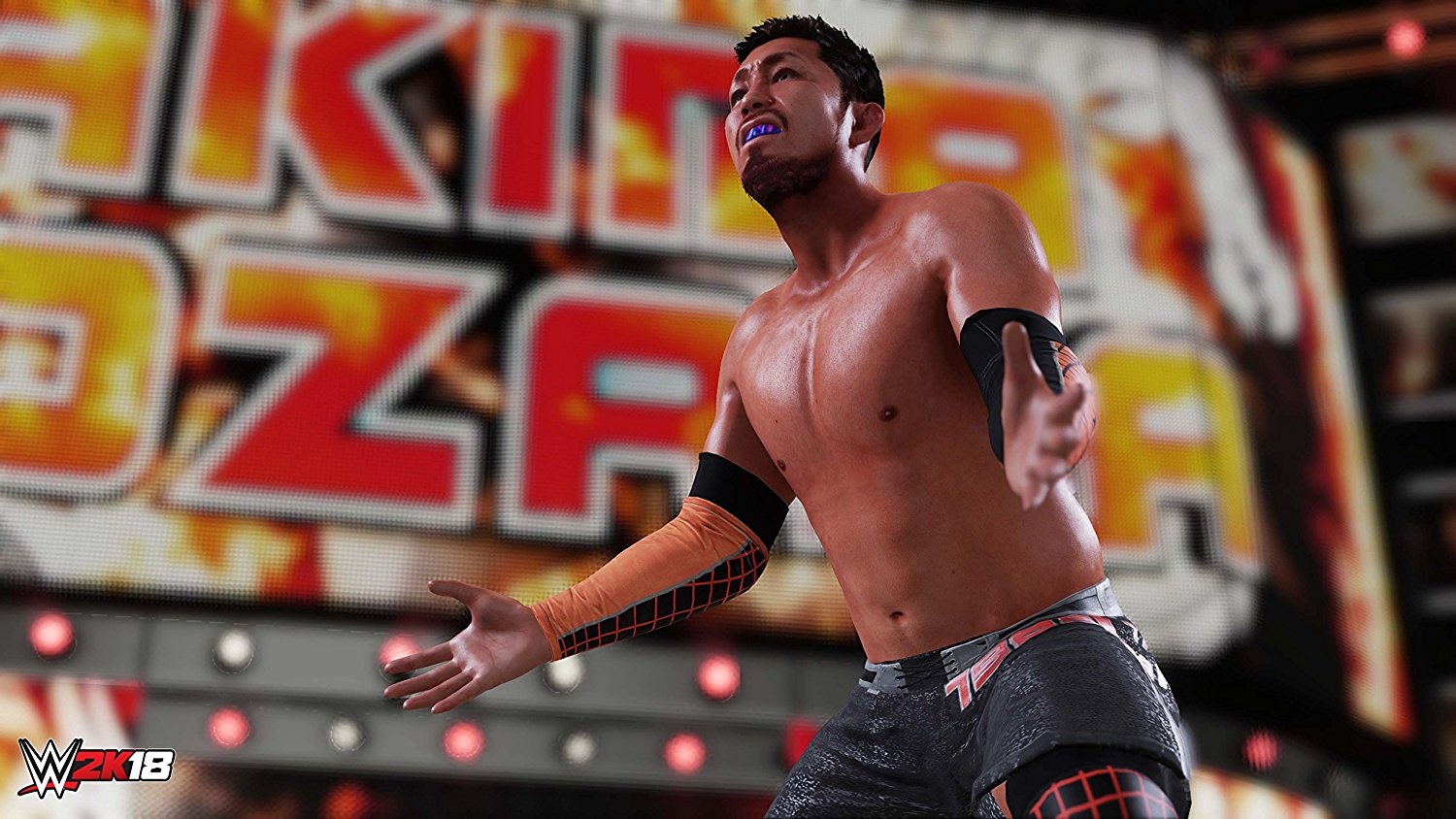 Speaking of glitches, there are still a ton of glitches in the game. I am all for the funny, graphical glitch. I got to see HBK walk around with a table or stairs spin on the rope. That, while broken can be humorous. I am not a fan of showing a friend the game, doing a tag, and having the AI takeover his place mid-match, ruining the entire experience for both of us. Matches can finally hold eight people in the ring at once, and let me tell you – this is not a polished addition. The slowdown is drastic during any bout, and the general AI just seems to get confused after a while of how to finish the match properly. I really think a of my experience fighting the computers in normal bouts were fine. However, there is still a lot of work to do for this AI to feel anything like the real product – or even close to other, more focused experiences that have come before this.

Finally, customization is at an all-time high. Superstars can don attires to almost anything you can dream up, and despite a few odd glitches, utilizing this tool is rather simple even with the mass amount of options present. It is like this game is finally starting to take form of a vision, and as a whole, I am pleased, but I still question so many things that went into this release as there is so many hiccups that are yet to receive treatment. Another big worry I have is that this title seems to be groomed around the DLC that has been available to purchase, such as the accelerator and the season pass. There just seems to be more you can’t do out of the box than ever before, as that invisible gate holds strong.

Visually, a lot of WWE 2K18 is impressive. Most models look fine, and the arenas look great. However, there are new facial animations that seem to act up. Sasha Banks now looks like she is drinking from a straw at various points and Edge appears to be a man in cosplay. Creation is still difficult due to our wrestlers animating during prep, and a lot of animations in ring are just….wrong. Sure, this is the best looking wrestling game in existence, but when you have no competition in that area, why not take more time to coat things with polish. 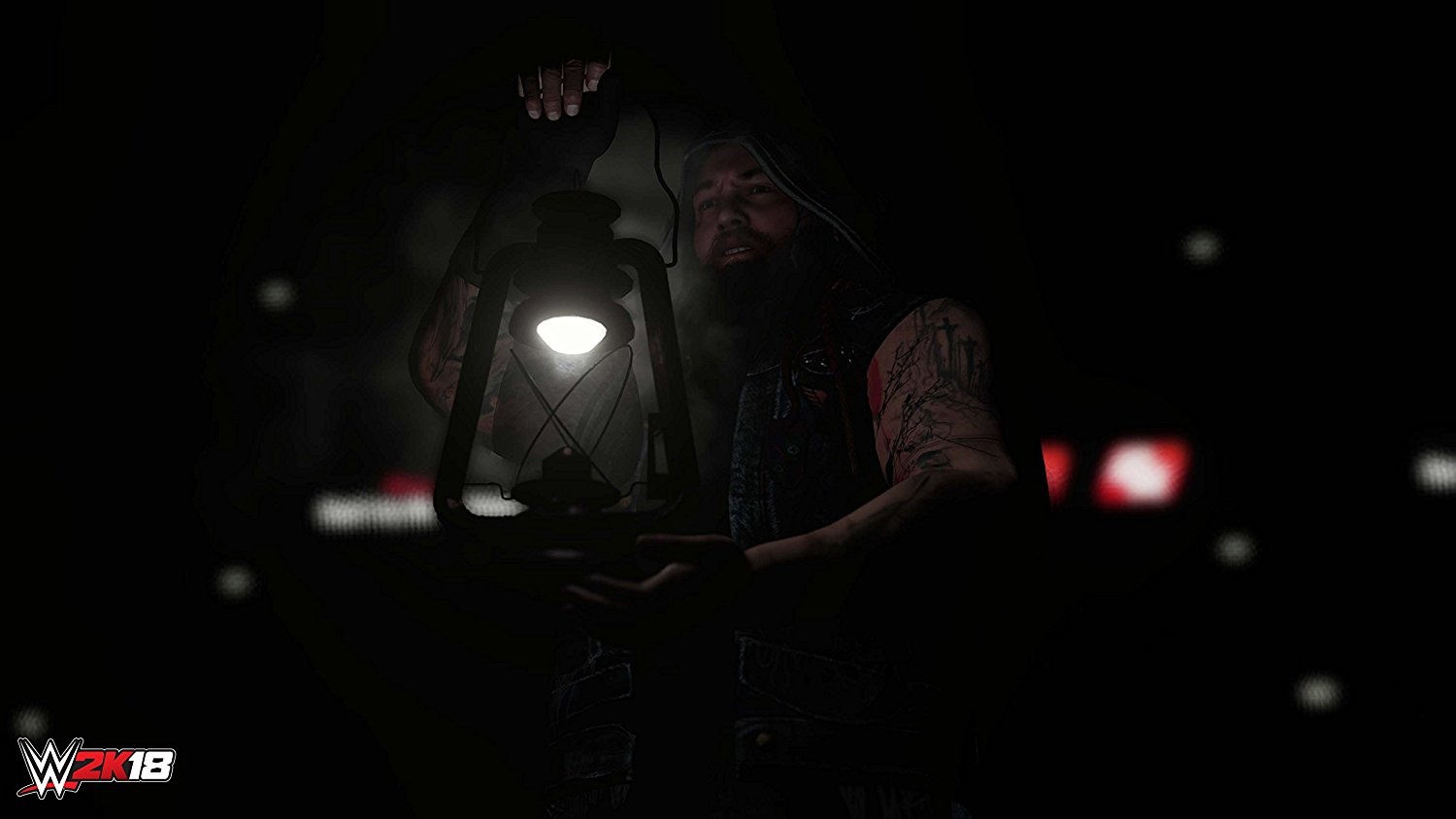 The soundtrack, selected by The Rock, will be a nice thing to turn off as it is just terrible. That said, you have that choice, and honestly – a lot of attention went into sound. We now have more Superstars who have voiced grunts and screams, adding a ton of depth to the experience. The entrances are great and even though the time clock keeps some included themes out of current affairs, I was very pleased to see the song list selected for generic customization options for my own little creations.

WWE 2K18 is a step up from last year by a mile. Sure, there are glitches, frustrations, and a ton of bullshit that simply should not be in a “AAA” title with such a budget, but I can see the stitching this year. I can see an effort made to actually begin fixing the problems as for the first time in a few years, I had a ton of fun playing a lot of matches on the card. Wrestling fans are passionate, and at the end of the day – all we want is a fun game so we can live out our favorite hobby. That is why I am so critical, but even the most lax will have a time getting past so many shortcomings that this series seems to trudge in. It is just a slight sigh of relief that at least this particular package works properly this time around – even if the cracks are still dripping with glue.

Road to the Past
6