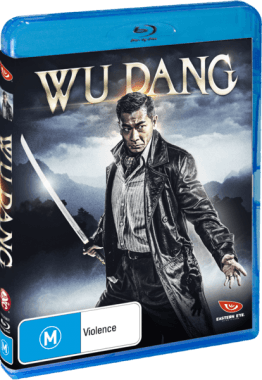 Overview:
Chinese cinema has stood on its own two feet since the late nineties. Film production is at a point where it replicates the nature of the Hollywood studio system at its highest level, so we can expect the same pros and cons we apply to the US. The question here is, does replicating Hollywood blockbusters help or hinder “Wu Dang?” It certainly follows the ‘high concept’ formula of film making, which I’ve always found ironic since the style actually generates low brow films. The cast is pretty big if you’ve seen a bit of Chinese cinema, half the cast should be familiar from the “Ip Man” franchise alone. Xu Jiao of “CJ7” fame is here as well, actually playing a character who shares her gender this time. With the popularity of fantasy-realism across Asia, you can at least expect this film to gross well. 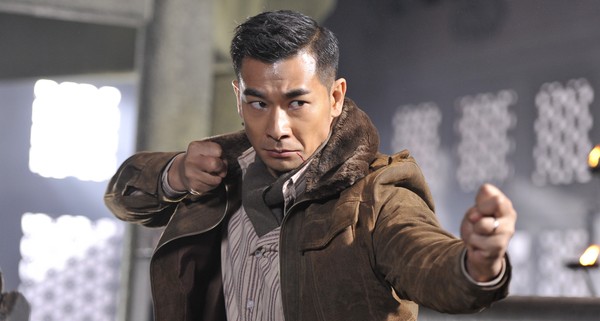 Story:
Set in Republican Era China, the time period from 1912 right up to Japanese occupation, the story opens with Professor Tang Yunlong (Vincent Zhao) doing his best Indiana Jones impression. It would have been really cool if the film continued down this path, particularly with the matching time periods and aesthetics in the opening sequence. Alas, it is not to be the case. Tang Yunlong has returned from a self imposed exile to the United States in order to sponsor the 500th anniversary of a martial arts contest held in the Wu Dang mountains. His daughter, Tang Ning (Xu Jiao) is to compete in the contest.

Yunlong uses his sick archaeology skills to decode a map he found with a forged antique sword that was being flogged by Paul Chen (Tam Chun-yin), a trafficker of artefacts. The loot depicted on the map should help Yunlong aid his daughter but when he arrives at Wu Dang, it appears the mysterious Tian Xin (Mini Yang) also has a whiff of the loot. Splitting up the treasure hunting elements of the film is the martial arts contest. Shui Heyi (Louis Fan) has been selected as the representative for the hosts via the age old selection process of waking-the-master-from-hibernation method (Xie, played by Henry Fong). This creates a minor uproar and greatly disturbs  Bai Long (Dennis To) due to Shui’s inability to kung-fu. Xie schools Shui Heyi in the art of sleeping kung-fu, a method that speeds up the process of learning kung-fu significantly.

There’s a bit more going on here but not much and I won’t detail it in case you want to watch the film. Director Patrick Leung does what he can with the story here, using the fantasy elements to highlight the emotional cores of his characters. Without this, many of the characters would feel one dimensional so the fantasy element earns its place in the narrative. “Wu Dang” sets itself up as a blockbuster and as such doesn’t have too much room to explore any motives beyond setting up the take away message of the film. That message is something along the lines of ‘families are cool.’ A shame really, as the two best actors for my money are Xu Jiao and Mini Yang. Mini Yang’s character Tian Xin is a great independent female protagonist right up until the end. While you can’t really expect more from a blockbuster, it’s a massive let down watching the final sequence of her character arc. 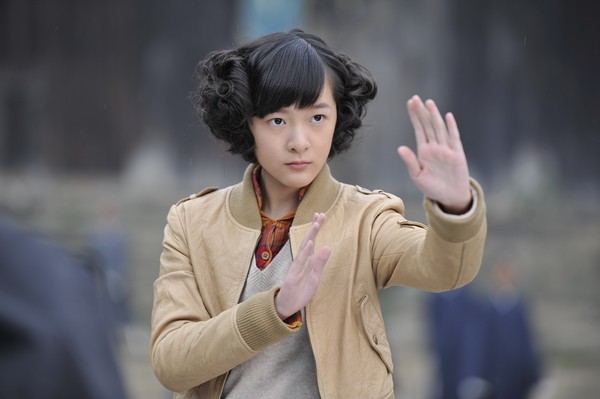 All the relationships here are a bit screwy on reflection, not just Tian Xin’s. Shui Heyi, for example, has been tending to his mother’s sickness for so long he hasn’t had time to find himself a wife. When Tang Ning – who I should point out could be no older than 14 at a push – literally falls from the sky onto Shui’s bed, his mother immediately recognises this as a sign that they are to be wed. A fair chunk of this film is based around this relationship, which initially Shui recognises as creepy. He gets over it though. It would almost be hard to describe it as a romantic one as there is an innocent charm to it if it weren’t for the mother character constantly going on about their impending marriage, bringing their relationship firmly into weirdo territory.

Overall, there’s little substance to be found in the narrative. Most of the action focuses around chasing down macguffins. Once all of the macguffins are found the rest of the film strings together deus ex machina moments till the production team ran of screen time. This is where following blockbuster formulas forces you to make a boring movie. If the pay off at the end were worthwhile, or at least believable within the universe the film has created, then some of the moments preceding could have been endearing. Without such a pay off everything beforehand is rendered rather trite. 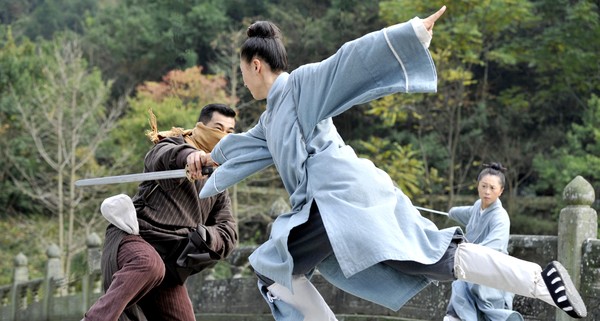 Visuals:
“Wu Dang” is beautiful. Every part of it is beautiful. The Wu Dang mountains themselves are a spectacle, almost verging on that magical point where they become their own character. If the narrative has done more to have the characters relate to that space, “Wu Dang” could have been compared to movies like Apocalypse Now and Bladerunner where the locations have such a massive impact on the audience they gain a personality. There are times where you get this sensation yet without the location moving the characters I can’t honestly say they pull it off here.

Corey Yuen choreographs the fight scenes with the panache you would expect a veteran of his stature to be able to produce. Corey is renowned for films like “Romeo Must Die” and “The Transporter” in the West but he’s also achieved some great heights at home with “Legend of the Red Dragon,” “Thunderbolt” and “Fong Sai-yuk.” Wire work is used extensively to give everyone super powers, which is actually highlighted really well in a scene with Tang Yunlong and Tain Xin. Yunlong gives Xin some stick, insinuating it’s because she’s a woman. When she spits back an insult at him he takes it back by saying ‘we’re all masters here.’ That feeling of each character being a master of kung-fu is very strong. Even Xu Jiao is portrayed in such a way that despite being a young teen she can obviously kick a grown man’s butt.

Cinematography is the core strength of the film. Each shot plays off the last, even in the sloppier moments. The colour palate has so much diversity within it it would be easy for a less adept director to lose control of it and have a psychadelic looking mess on their hands. Instead the colours are cleanly used to set up so much it feels condescending that we also have to put up with the superfluous exposition. Costuming is used to full effect thankfully. Choosing such an interesting period to work within has given Academy Award winning Emi Wada the perfect opportunity to let loose. Yunlong in particular stands out with a uniquely academic American style punctuated against the monastery. Sure, you’ll probably forget the story when the credits roll, however some of the images will stick with you for some time after you’ve walked away. 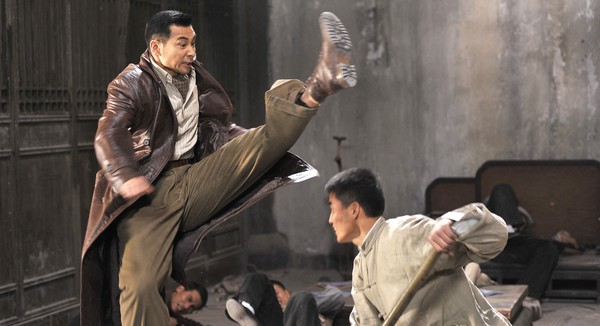 Audio:
Being a fantasy realism film, playing with sounds is necessary, not only to establish that blend. With fantasy realism sound is integral to define what lines are being crossed and which ones we’re staying firmly on the side of reality for. “Wu Dang” understands this. Weapons all have unique sounds, in particular there is one scene where Yunlong has just stolen an artifact and is being chased by all female guards. Their costumes denote that they’re a team and the sound is allowed to step in to show how deft they are at sword play. An ethereal sound accompanies each swing, syncing with the action within the scene to create one of the films finest action sequences. The soundtrack however, does what it needs to do in order to keep the pace of the film going. To be fair, having a soundtrack that goes almost unnoticed displays that they are working exactly to their intent. 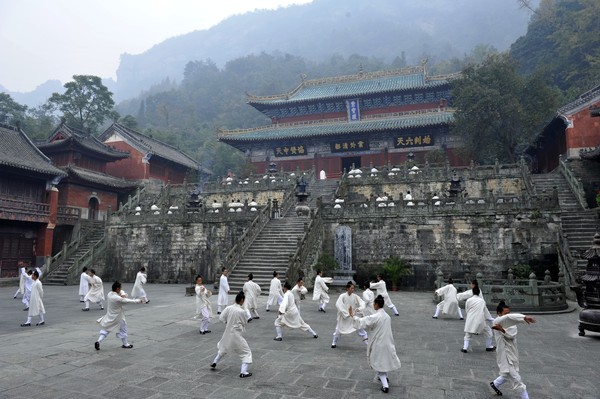 Extras:
There are 2 special features on the disc. A 30 minute making of and the trailer. I never understand why the trailers get attached to these sort of things. Obviously it’s because it’s cheap and they can – still I can’t help but feel they’re useless. Unless you go out of your way to watch it first, the trailer is moot. The making of isn’t so much of a documentary about how “Wu Dang” was made, rather it is a long winded circle jerk where the actors tell each other how good they are. None of the production is covered outside of extended wire choreography that sits underneath the actors talking about other actors. What could have been an insightful look at how big budget productions operate in China is used as marketing material. It’s a waste and I can’t suggest looking at it unless these actors are among your favourites. Even then, they don’t come off as sincere. 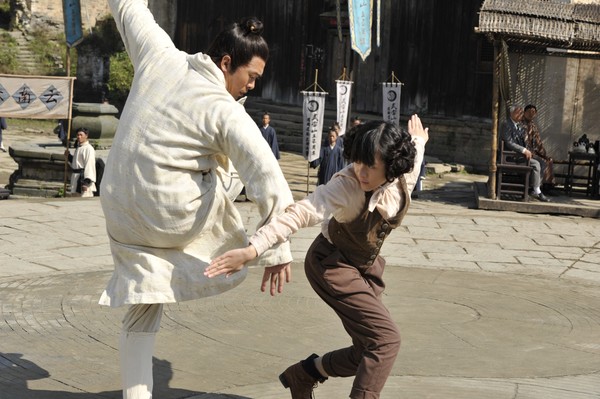 Overall:
“Wu Dang” is a blockbuster, trying to achieve what blockbusters must. It’s palatable for the whole family, reinforcing cultural norms while drawing inspiration from common people’s extraordinary achievements. No one is expecting a piece of high art out of this, at the same time no one was expecting it of Indiana Jones either. When you make a film that uses spectacle as the key selling point, at least try to make the narrative a romp so the audience can get carried away. In “Wu Dang” we see the characters move from set piece to set piece in a logical and boring fashion. The budget hasn’t gone to waste seeing as everything in frame looks so god damn gorgeous. Yet it’s such a shame that with a little tweaking and more devotion to story telling they could have validated their efforts here and made an entertaining film. One that could have stayed on in the imagination slightly longer than the time it will take you to put the disc back in the box and get a drink.