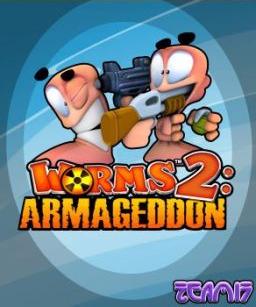 Worms 2: Armageddon is a sequel to Worms on XBLA.  Worms is a pretty recognizable franchise that has existed for well over a decade, getting its start on the PC.  Not much has changed since then, but as the saying goes, “Don’t fix what isn’t broken.”

You may have heard of this franchise but may not necessarily have played it or know what it’s about.  Put simply, it’s a turn based, strategic combat game that tasks you with controlling a team of cartoon style worms against another team of worms.  Yes, that sounds crazy and weird, but that’s part of its charm.

This is how a typical game of Worms will play out.  You pick a level, your team of four (along with the enemies team) will spawn in randomized locations across a 2D map.  A random Worm from your team will then be chosen to be controlled.  Depending on the match type selected, you will have some amount of time for moving around and selecting a weapon, let’s say the average is 60 seconds.  Within that time you can move around (very slowly), jump (only meant for clearing very small obstacles) and select and fire your weapon of choice.  After you have fired your weapon (or taken damage, such as falling too far or stepping on a mine) your turn ends and a random worm from enemy team is selected to do their bidding and so on and so forth until one team is left standing.

One place where Worms shines is the weapons.  A good understanding of how each weapon works as well as a little knowledge in physics (for eyeballing trajectories) will make the difference between a successful hit or a complete miss.  Also depending on the match type is what your arsenal will consist of.  If your map has a ceiling then all airborne weapons are unusable, such as airstrikes and bunker busters.  The classic default weapons are the bazooka and grenade.  These normally come with infinite ammo and are the basis of Worms combat.  The bazooka will launch a rocket in whatever direction you aim with whatever amount of force you allow it to charge up for.  You simply point, hold the fire button to designate how far you want it to go and let it fly.  This may seem simple, but know that under normal circumstances you will not have a direct indicator as to where it’s going to hit, you simply have a small crosshair directly in front of you to tell you where it’s pointing.  That’s where the skill comes into play, knowing exactly how to aim and how long to charge it for it to hit it’s mark.  The rest of the challenge comes from not hitting your teammates (friendly fire is a big factor here) and counteracting wind.  Wind can and will change between each turn, blowing either left or right with varying levels of strength.  Balancing all of these factors is a key component to the Worms franchise. 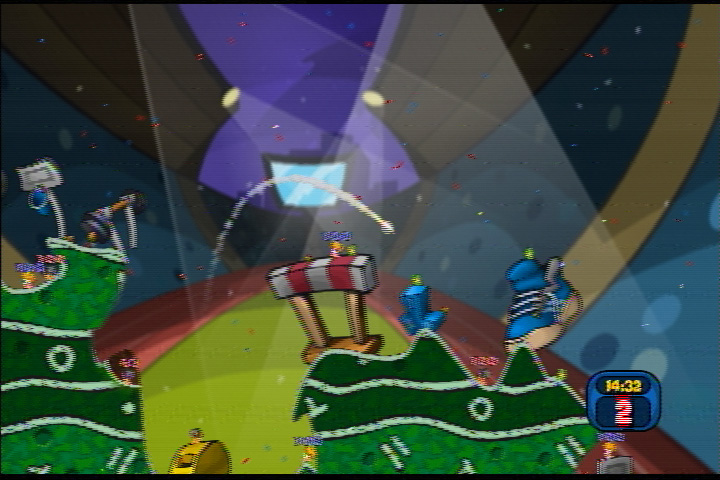 That was just detailing the bazooka, however.  Each and every weapon handles differently, as I’ve said.  A complete newcomer will have a tough time stumbling through their first few battles without having any idea what the weapons do, which is why I strongly suggest going through the training mode (which is as helpful as it is simple) and trying out a few quick battles while you fool around with the weapons.  Some weapons are affected by wind, some have delays on their deployment, some are designed to alter the landscape, basically what I’m saying is there are a bunch of varied weapon types that do require intimate knowledge on how to use them. 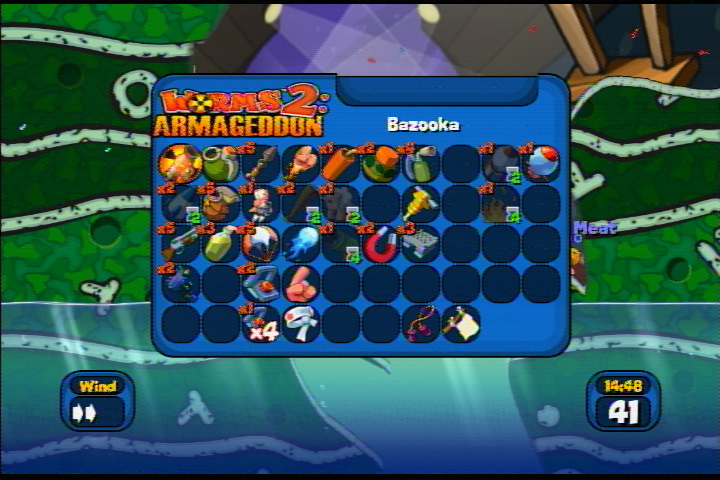 One can’t talk about Worms without mentioning it’s comedic factor.  While Worms is a franchise revolving around strategic combat, it is very lighthearted and can serve to make you chuckle on occasion.  Worms will do silly dances or motions during idle team or upon defeating an enemy such as bounce up and down or make a big, goofy smile.  They make themed remarks and one liners with tiny, high pitched voices with an example being, “I’m in my zone, Holmes” or will scream if a grenade lands near them.  Even the weapons themselves have great comedic effect, especially the animals.  A few of the animal weapons are the sheep (which will prance around until you tell it to explode), the ferret (which will scurry around the landscape until it comes into contact with a wall, object or player) and the devastating buffalo of lies (which continuously runs forward for a little while, exploding each time it hits a player).  These weapons are only made funnier when you unleash them upon a friend, allowing you to rub it in that a mere sheep killed them.

So far I’ve only talked about how the Worms franchise in general works.  But this review is about Worms 2: Armageddon specifically, so let’s get down to what is new to this release.  Normally, Worms has just been a multiplayer only sort of game.  It’s always had computer controlled teams, but in this game there is a campaign mode consisting of over 35 battles and missions.  I use the term campaign lightly as campaign usually refers to a mode with some semblance of story, which this game attempts to do in some sense but it isn’t much.  You basically go through each “area” defeating the various enemy teams that inhabit them.  You start out in the city area, then move on to the medieval area, etc.  Some missions actually are not battles and are more like a challenge mission.  Sometimes you are tasked with getting to a teleporter with whatever limited resources you have while other times you must use a grapple to navigate a maze-like level in a race against the clock.  These add a great deal of variety to the game and make this campaign mode stand out amongst the rest of the game.  Also to note is that completion of each mission will result in a reward of some money (more on that in a second) giving you some reason to try it out as opposed to just fighting random battles against friends or computers. 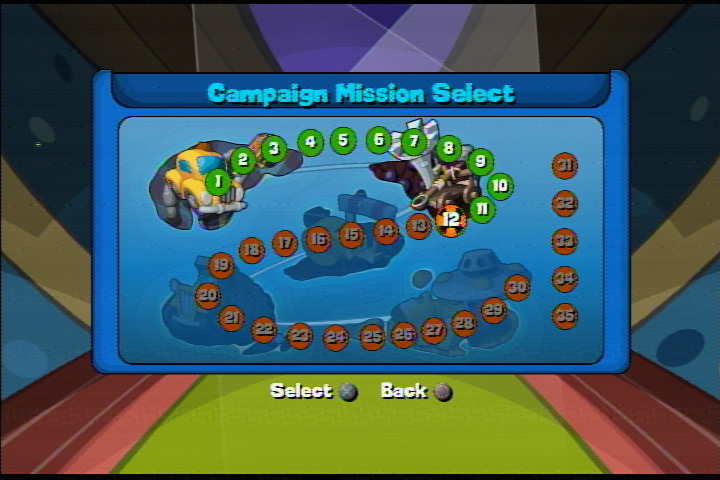 Serving as a bit of an aid to differentiating your worms from the enemies is the new customization options.  You can now customize your team with various hats, victory dances, skin colors and voice options 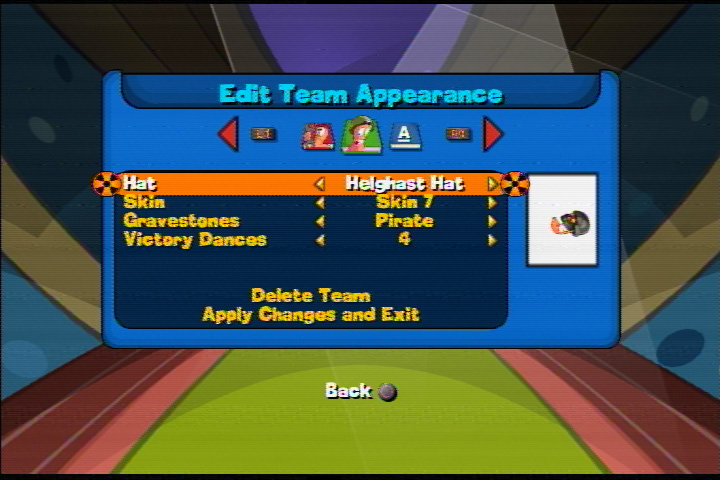 Another new feature, the shop, is where you spend your hard earned money from the campaign.  Within the shop are 6 tabs; customization, landscapes, weapons, missions, forts and gravestones.  Customization is where you can buy more hats for your worms (I should also note that the PSN version of this game comes preloaded with unique hats based off of some games on the PS3 such as Helghast helmets, motocross helmets, a sackboy mask and more).  Landscapes consists of a few other maps that you can choose from to use in multiplayer.  Weapons is just that, some weapons that you can’t use until you unlock, mainly consisting of animals and super weapons like the Holy Hand Grenade (produces an extremely large explosion).  Missions consists of 5 special missions that exist within the campaign that require your purchase to be unlocked.  Forts is for a special gametype called Forts where your team is perched on a themed fort such as a castle or a giant chicken and you must take out the opposing team who sits on a differently themed fort on the other side of the level.  Finally is gravestones which is simply more customization to your own worms who turn into a grave upon death.

Also new to the game is a pretty in depth landscape generator which will generate random levels for you to use in multiplayer.  You can choose from a handful of parameters such as basic make-up of the level (indoors, two hills, one tall hill, etc), how many objects, mines, napalm tanks litter the battlefield, how high the water is (water is a hazard as worms cannot swim) and what the theme of the level is (city, castle, sports, etc). 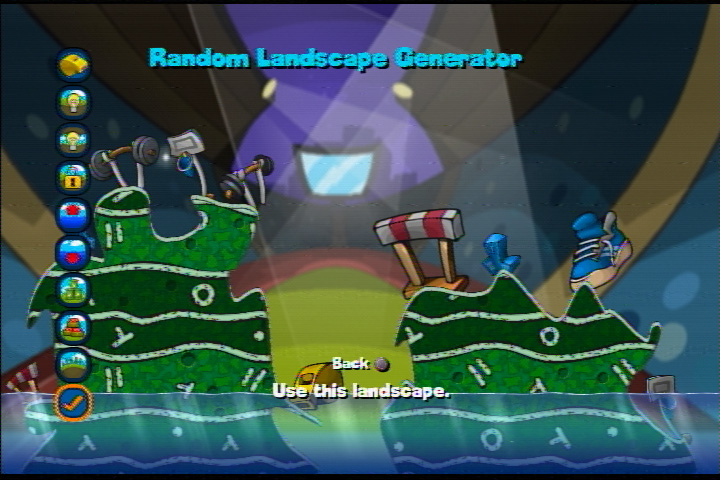 Fans of the series will notice that there are a handful of both new and old weapons who haven’t been in previous games making up your arsenal.  Returning weapons include napalm, super sheep, holy hand grenade, petrol bomb, concrete donkey, Armageddon, parachute, drill, baseball bat, earthquake and poison strike.  The new weapons include a sentry gun, electromagnet, lightning strike, buffalo of lies, bunker buster and the super bunker buster.

Finally to note is the inclusion of leaderboards that track leaders for every game type.

At its heart, Worms 2: Armageddon is a pretty enjoyable game.  Its combination of combat, comedy and challenge is a great mix and is only made better when you play it with a friend.  The fact that this game is fully playable online is also a great feature, though the invite system could have been implemented better (you need to access the invite from in game to accept).  The leaderboards are there for those who care about such things.  The game’s randomized levels ensure that you won’t ever experience the same game twice which is a good thing given this game’s multiplayer only (essentially) status.

One thing I must note, however, is that the game can and will become repetitive.  There are a handful of game types to play to counteract this, but most of what you will be doing is playing out battle after battle.  If you like this style of gameplay then you won’t be disappointed, but know that there isn’t much else beyond this save for the race mode.

If you are a fan of multiplayer games you will probably enjoy this game.  Due to its style of gameplay it essentially never “ends” and so it has colossal replay value, especially when taking into consideration it’s online and local multiplayer.