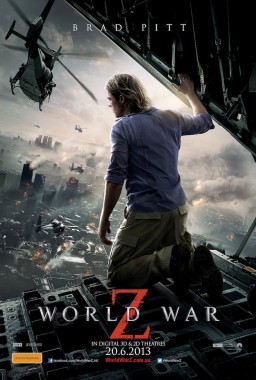 World War Z is a film based very loosely upon the Max Brooks novel World War Z: An Oral History of the Zombie War. While both focus on the worldwide pandemic of the undead, the time frames in which they are set is completely different. Whilst the novel is a recounting of the events through a number of interviews, the film places the audience smack bang in the middle of chaos. What were, in the novel, slow moving husks have become an unstoppable tide of death. This leaves one question; does the film’s new take on the war to end all wars do the title justice? 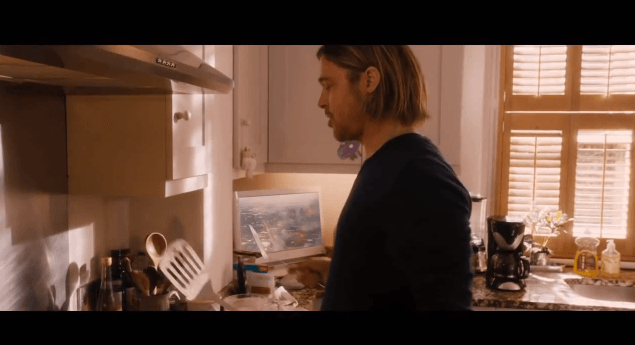 World War Z follows Gerry Lane (Brad Pitt), former UN Investigator and now stay at home dad. Life’s good. He has his family, pancakes and a peaceful life. This is shattered almost immediately. Chaos breaks and the undead cascade through the town. Farewell peace. As the living flee from the dead, Gerry must save his family. Eventually, through a friend from his UN days, Gerry finds his ticket to safety; however, there is a price. Gerry must now help find a cure for this global pandemic.

One element of the film made immediately apparent is speed. From the abruptness of its beginning to the constant shifts in locale, World War Z does a great job at portraying a sense of urgency. The constant travelling lends credence to the notion of a planetwide panic, where battles rage across every country, creating one of the most interesting and well implemented elements of World War Z: that it is actually a world war. Unlike other Hollywood zombie movies, the plot moves outside of the USA and shows the pandemic’s effect on the rest of the planet. The film even presents details on how the virus spreads differently depending on the circumstances and how not everyone is properly equipped to fight back. This broad scale raises interesting issues regarding the actions of the world at large, rather than the vague exclusion that occurs in zombie films that focus on a small band of survivors. From the outset, the audience knows that this won’t be a traditional zombie affair. There will be no shambling, there will be no standing against the tide and there certainly won’t be any counting the number of enemies. 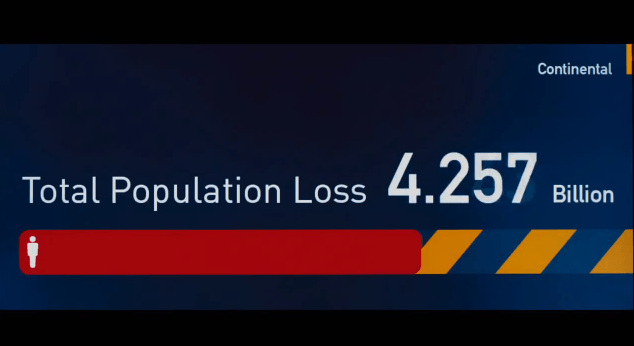 The film also conveyed the worldwide reaction to the panic in quite an interesting way. Without going into spoilers, bureaucracy does play a role in the chaos and, fairly uncommon to the traditional tropes of zombie movies, actually continues to function somewhat. The remaining government continues to aid survivors whilst trying to figure out the cause of the zombies. It also provides a unique perspective in regards to survival movies, where the audience gets to see the side of the rescuing organisation, rather than the survivors who call out for help. Though this does provide a unique and worldlier take on the events of the film, it is mostly glazed over, opting instead for the focus on Gerry.

The notion of zombies itself is also interesting as, unlike other zombie and virus films, the term actually exists within the film. Taking place in the “real world” it is assumed that zombie literature exists, as the term is used, though sparingly, throughout the film. The fact that knowledge, or at the very least stories, of zombies existed places a sense of realism on the film whilst also somewhat undermining the complete sense of confusion and denial in some characters. 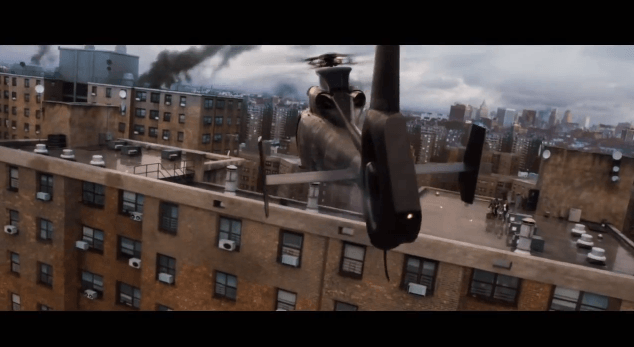 A helicopter tour of the chaos

The ending of the film itself actually differs a fair deal from the rest of the film. The pacing slows down and the film focuses on one particular area. An emphasis is placed on stealth and avoidance, rather than combat and defence, shifting away from the chaotic scramble of previous scenes for a much more suspenseful and tense endeavour.  Though the final moments are not too far out of left field, more time definitely could’ve been spent focusing on the final moments. There is a certain sense of ambiguity left surrounding the conclusion. Though it does create a sense of continuation, it also feels abrupt in its resolution and not as thoroughly explored as it could have been.

Two words: Kamikaze Zombies. The undead in World War Z are fast, furious and feral. In an absolute 180 from classic zombies, these creatures scramble en masse and infect in numbers. They aren’t nearly as fragile as old school shamblers, being able to slam into walls at top speed then get back up and start again. The fluid movement of each creature is amazing and each can range from running to a predatory pounce. The sheer number of zombies on screen is mind boggling at points and it is this scale that further adds to the sense of a planetary infection. The all consuming drive of the zombies culminates in the terrifying scene of thousands scrambling over each other in a tidal wave of chaos. When presented one on one, more traditional make-up was used to create the terrors. Clouded eyes and shattered teeth, scars and scratches – all the trademarks of viral terrors. 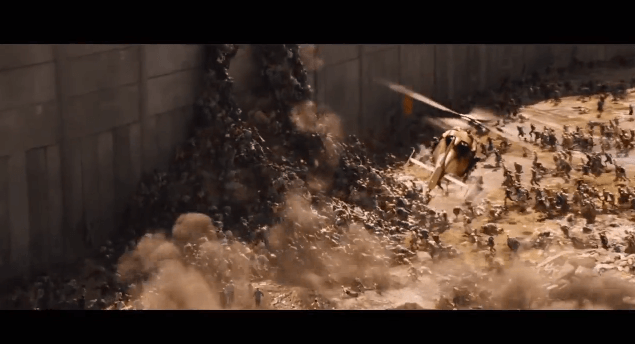 They’re just undying to get in

The film itself took on a fairly muted colour scheme throughout. The environments tended to lean towards browns and greys to push the sense of desolation and damage. Grey was prevalent in the falling cities and, in certain sequences, a lack of light was used to increase tension more akin to older zombie films. The cities themselves were true to form, varying from urban sprawls to sandstone cities. Each was constructed, then brutally de-constructed, beautifully.

The film is available to see in 3D, though this really isn’t necessary. The effect does create a sense of depth and scale, but it isn’t as fully implemented as it could’ve been. Apart from one instance where a zombie lunges at the screen, the film will not suffer from being viewed in 2D. 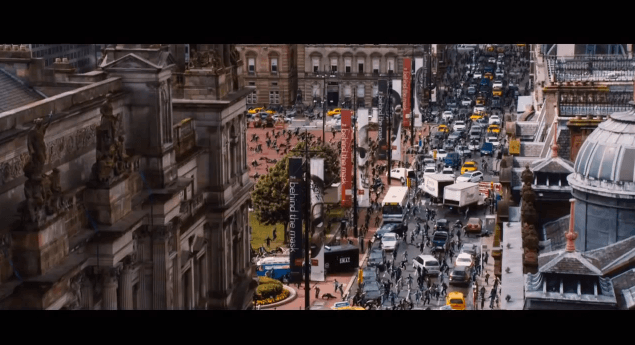 Expect delays on the highway

Right from the start World War Z uses sound to boost the tension and terror of the onslaught of creatures. Just as it was used in the trailer, the resounding and dramatic boom is used in the opening push to incite shock and panic. Throughout the film, the soundtrack is used to get the audience’s pulse racing, if it hasn’t been done so by the visuals. In particularly dramatic scenes, it is the lack of sound that can achieve the same effect, using suspense and anticipation

The zombies themselves add to the terrible cacophony with their own blend of terrible sounds. Rather than moaning, the World War Z creatures shriek and click, creating a far more bestial quality. The constant snarling continues this brutal theme and lends to the in film speculation that the pandemic is a mutated form of rabies. Unlike the traditional undead who sound like humans in pain, these zombies no longer sound remotely human in nature. 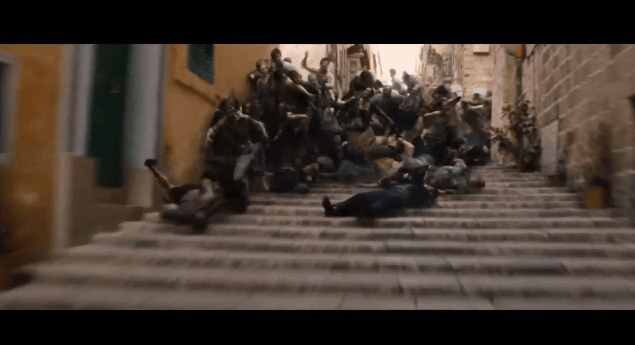 Welcome to the inhuman race

World War Z is a great film. Though the overall feel of the movie has more in common with an infection film, rather than a zombie one, it does a great job of creating a large scale story. In what is one of the rare examples, the worldwide catastrophe is actually shown affecting various parts of the world and to varying degrees. World War Z presents a world different to that of the book, the style of zombie is vastly different and it is set out in a different tense. Though it is an obviously Hollywood take on a unique story, the film is enjoyable to watch and a different experience to the more traditional zombie film.