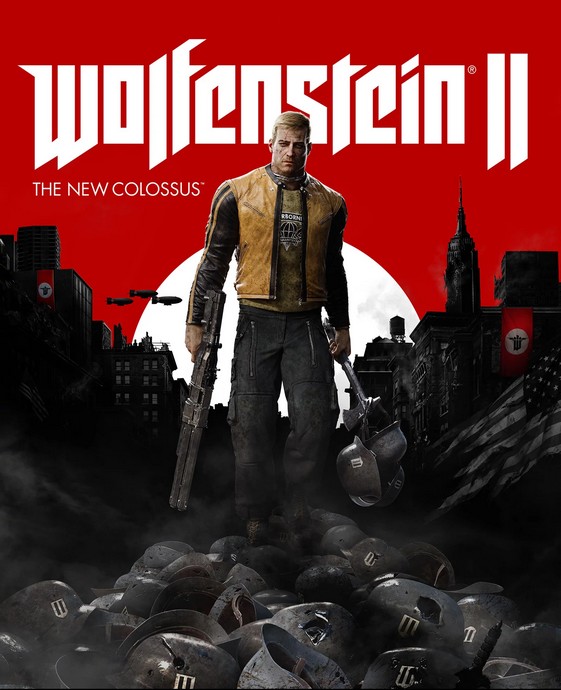 If there is one thing to be said about the gaming year of 2017, it’s that so far it’s been a damn fine year. We got some good original releases for both consoles and PC. Some reboots, remakes, and sequels where a good number of them delivered in terms of quality and most importantly – fun. So here we are in the company of Wolfenstein II: The New Colossus. Sequel to the acclaimed Wolfenstein: The New Order from 2014 which garnered great reviews so let’s find out if the same could be said for this one.

By now, we all know the general gist of Wolfenstein games and their stories. An alternate reality where Nazis won but there is one badass by the name of B. J. Blazkowicz who just doesn’t want to give up. Throw some occult into the mix with satisfying gunplay and we have a winning recipe. The story of The New Colossus is a direct continuation of what happened at the end of The New Order. We were led to believe that B. J. ended his run at taking down Deathshead which also left him fatally wounded. Pretty early in this game, we learn that’s far from the truth. While the injury left him basically crippled (I kid you not, the first level is you taking down Nazis while in a wheelchair) soon enough he acquires a certain prosthetic enhancement that somewhat fixes him. With Deathshead out of the way, the role of the main antagonist for The New Colossus goes to Frau Engel from the previous game. While Deathshead was more calculated and scientific research was a driving force behind his monstrosities, Frau Engel is something else. She’s ruthless, psychotic, sadistic and dedicated to murder Blazkowicz as a revenge for him killing her lover and disfiguring her. The New Colossus does a good job of expanding the lore of Wolfenstein and further fleshing out the characters. Here we find out more about Blaskowitz’s history, childhood, and upbringing. All I can say is that it wasn’t exactly a house full of love, with a cruel father who doesn’t exactly share Blaskowitz’s strong anti-Nazi opinions. It shines a light on what made B. J. the man he is today and what childhood events fueled more his hatred for Nazis. Beside them just being Nazis, you know. That’s more than a good reason to hate them as it is. As the story is nicely composed and served to you, things get a bit wobbly as you progress through the game. It almost feels like there were two teams in charge of writing everything. One team that made the story gritty, action-packed and emotionally charged like before and one that decided to go full sci-fi at one point with no brakes. There is a point midway through the game where a story takes a strange turn and just forces you to pause, take a step back and go “huh, I guess that’s a thing now”. I don’t want to spoil much but the kind of injury B. J. suffers later in the game is 10 times more fatal than what happened at the end of The New Order. Yet, some things happen and he ends up being healthier than ever. When it comes to the story, Wolfenstein was always toying with the density of plot armor for the main and supporting characters. However, The New Colossus really pushes what’s acceptable and logical in its universe. At the end, it is for you to decide if the overall story borders between absurd, disjointed or moves the goal post in how much you can stomach. 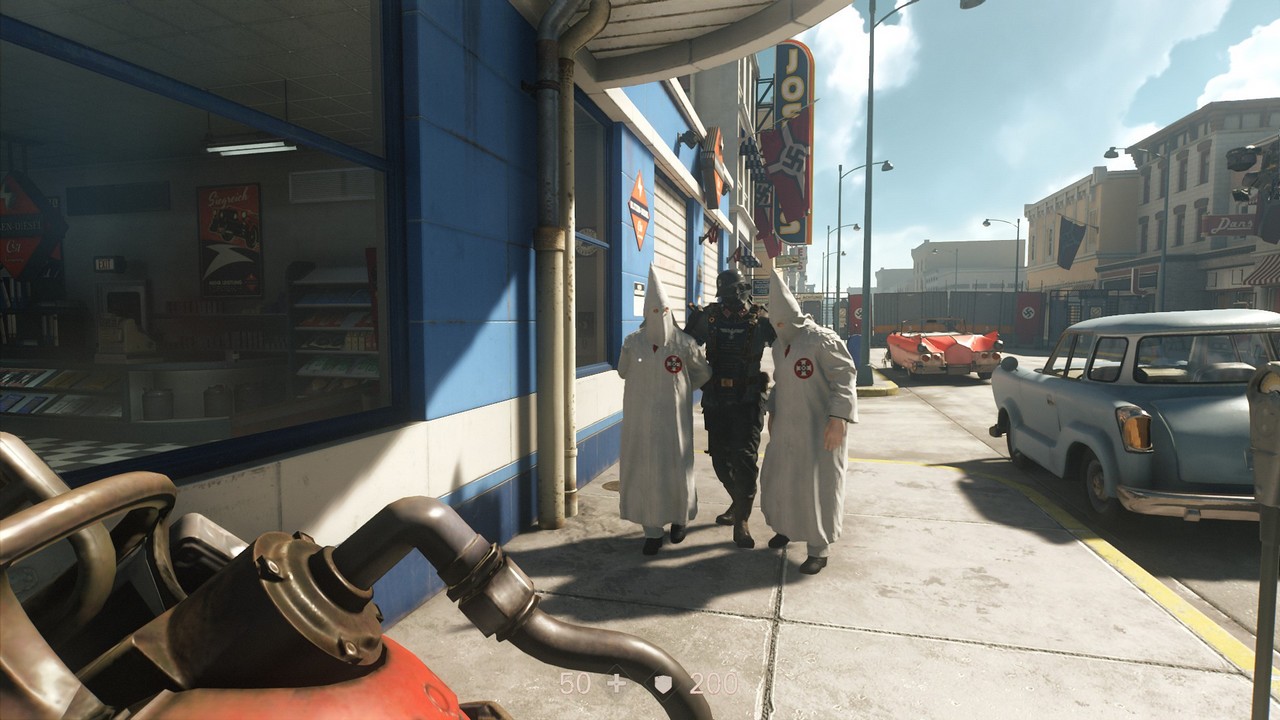 In other news, the gameplay (and most importantly – gunplay) is better than ever. Some new weapons are added to our arsenal and there is a lot of liberty in how you decide to approach the levels. Some are entirely doable in stealth if you’re patient enough but at any point, you’re free to say “I’m too badass for this” and proceed to annihilate everyone and everything. Another thing I like is how some guns can influence the strategy and combat with enemies. Weapons of stronger caliber will enable you to paint the rooms and open areas red pretty fast. At the same time, it’s not something you can accomplish with the usual weapons unless you’re playing on lower difficulties. Ammo distribution throughout the levels (and the game) is pretty clever since it never gives you a chance to hoard it for specific guns and just go full Rambo at later stages. There are plenty of moments to try everything from the arsenal but there’s never an easy and cheesing winning strategy. The AI is far from simple as well, so some tactics and smart positioning as you progress are crucial. 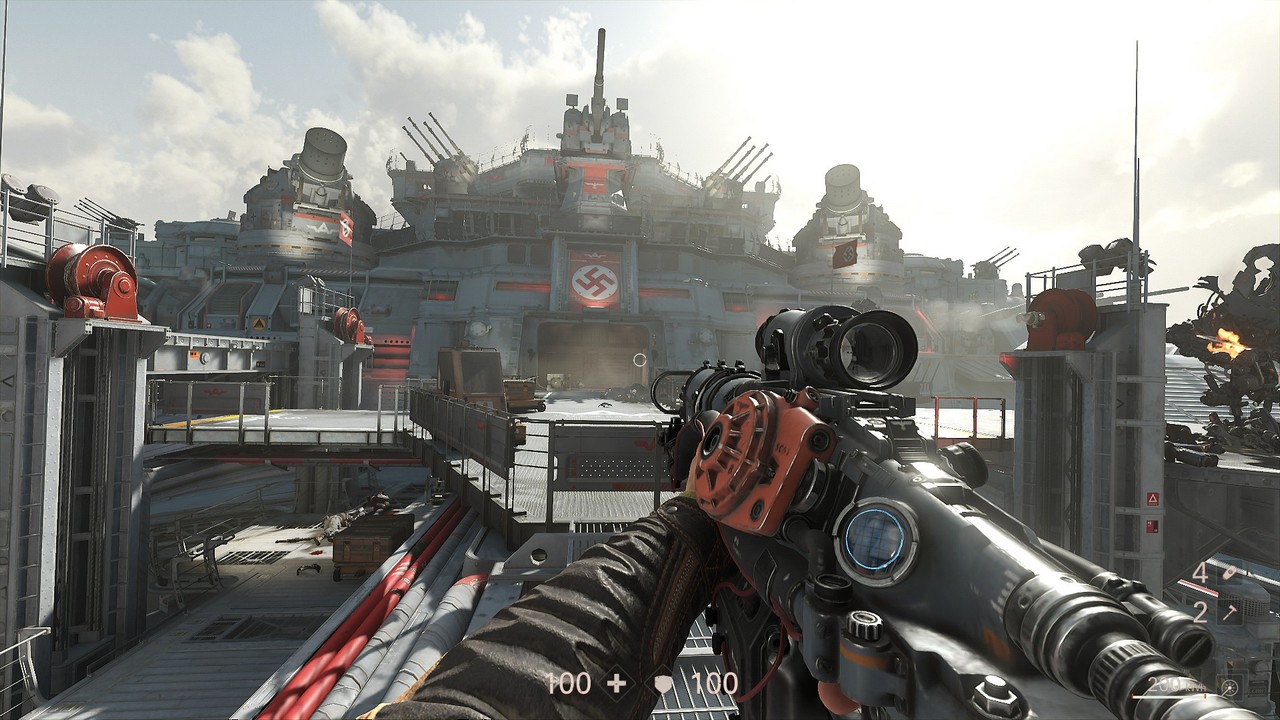 The New Colossus cranks it up a bit with level design and locations. They don’t seem linear and straightforward as in the previous game. Some locations later in the game are sure to catch you by surprise.  They are unique as well as unexpected and really emphasize that sci-fi element of the story I mentioned above. The engine seems improved too, I could notice more details on characters compared to The New Order and that’s especially clear during cutscenes. Certain larger enemies are modeled with a crazy amount of details with more of it being shown as you take them down piece by piece. 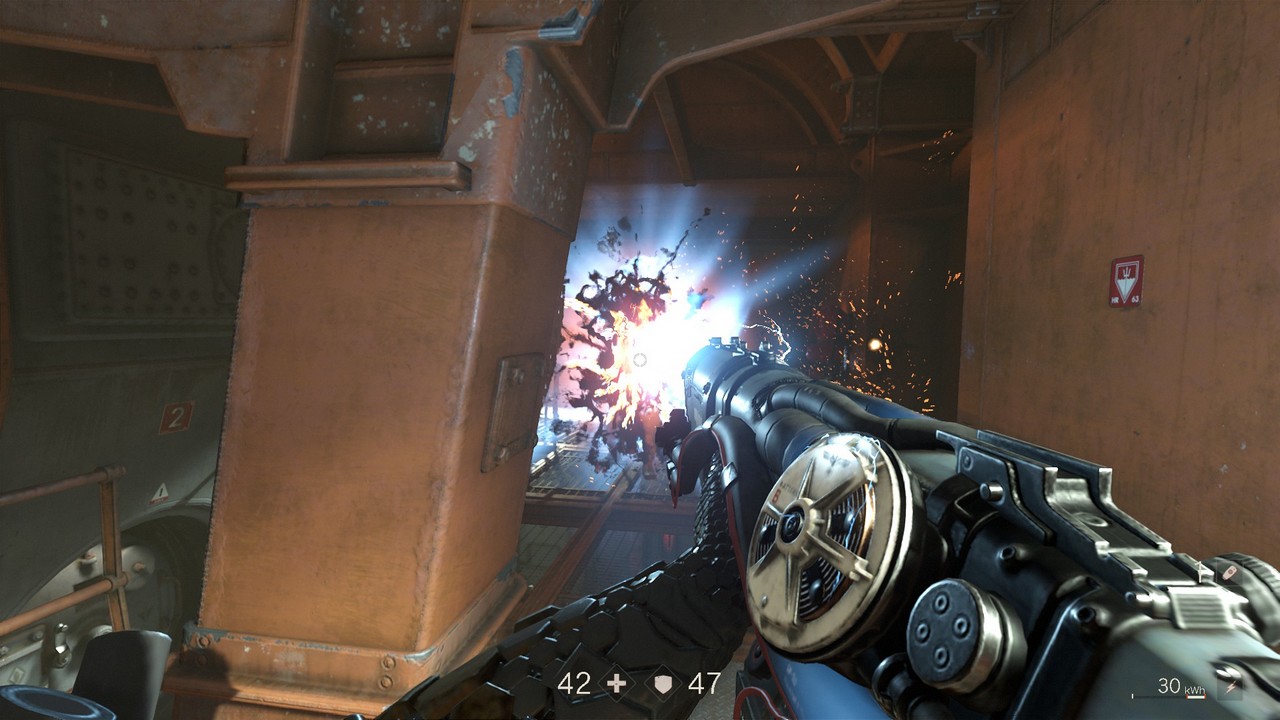 One word: Mick Gordon. Actually, that’s two words and it’s the first and last name of someone but for folks who played the recent DOOM, I don’t need to say more. For everyone else, the music in The New Colossus is an action-packed, octane-fueled monster that fills you more and more with vengeful rage as you take down hordes of Nazis. Overall sound effects aren’t lacking as well, if you choose the cheeky sneaky approach on some levels, you can tell my careful listening if enemies are in the next room or around the corner. The sound design of weapons is superb so much that I developed a habit of reloading far too often just to enjoy how they all sound. 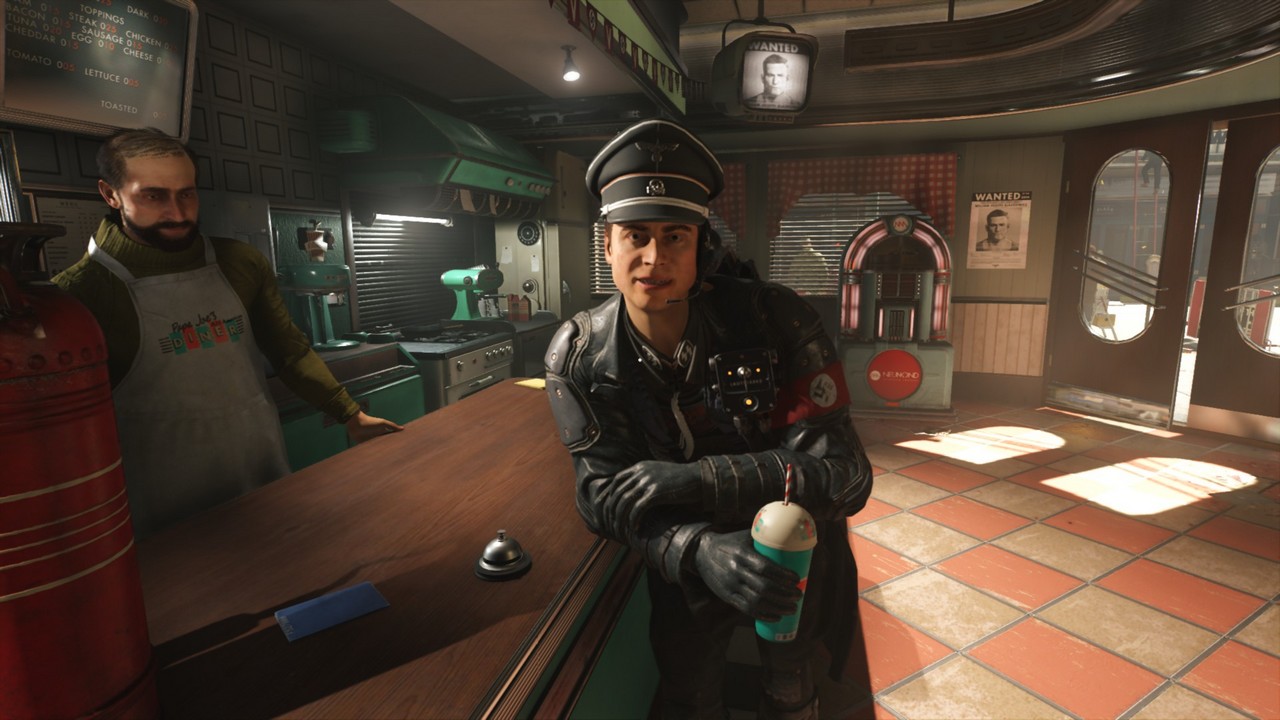 If there is one way to describe Wolfenstein: The New Colossus as short as possible, I’d call it a bridge game. A bridge between The New Order and whatever the next installment in the series will be named. If you are here to murder some Nazis, demolish their properties and enjoy the gunplay, then, by all means, The New Colossus is a game for you and a worthy follow up to the previous one. My main criticism is that the story of it leaves too many loose ends that are clearly set up for (what is now clear) a sure sequel. The occult aspect, which has been the story element in all the games so far, is present here as well. But it doesn’t go further than certain things being discovered, discussed and then it just kind of stops there. Even the final conflict in the game leaves much to be desired. I found the Deathshead confrontation in The New Order far more involved for me as a player and satisfying compared to what happens at the end here. I’d be naive to not expect more from this series but I wasn’t a fan of how blatantly obvious everything was set up for the sequel. In the end, the story suffered because of it, making it seem all over the place. At the same time, it’s a good thing that story in Wolfenstein games wasn’t something that carried the whole package. Pure, unfiltered carnage with satisfying gunplay is the staple of Wolfenstein and if you’re here for that, The New Colossus certainly doesn’t disappoint on that front.

While the story feels like it should offer more, every other aspect of the game is greatly improved compared to the previous installment.
7.5