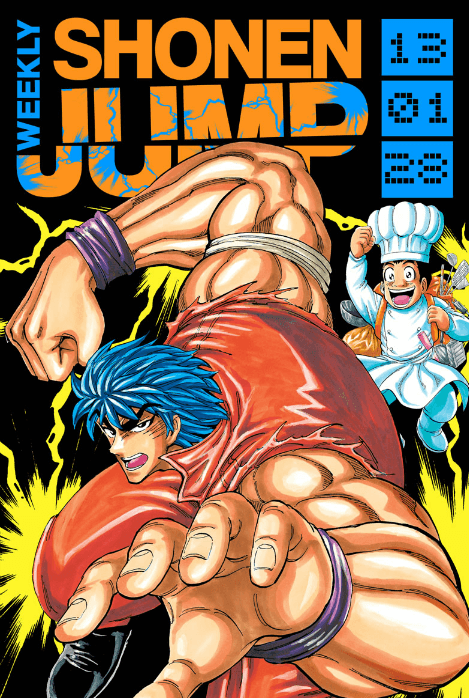 Overview:
One of the biggest complaints that people raise against the English manga world is the fact that translations of their favorite manga take far too long and lag too far behind the original Japanese releases. Well Viz Media has started to make a shift in the manga world by making their digital Weekly Shonen Jump simultaneous with Japan’s releases for a number of series. We’ve seen the first issue debut does the follow-up issue for January 28th keep things going?

Toriko:
Toriko takes the cover page and front place in this week’s issue with a two-page color spread featuring Toriko facing down the powerful Starjun. When we last saw Toriko the Gourmet Corp had invaded the Cooking Festival competition and Starjun had managed to capture poor Komatsu with Toriko staring him down. 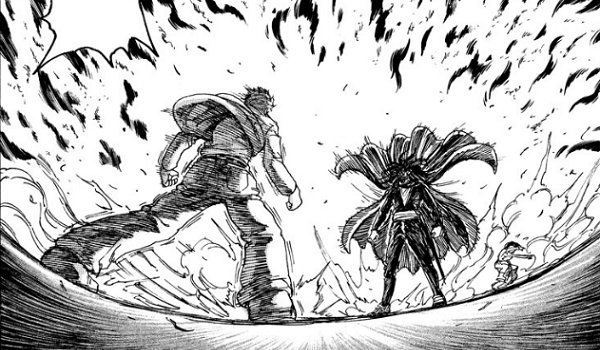 This chapter focuses heavily on set-up for the next few chapters as the Heavenly Knights pair off against the Vice-Chefs of the Gourmet Corp while demonstrating some of their abilities early on in the clash. The artwork is exceptionally detailed with many of the main characters showing off their skills while a few monsters sent by Gourmet Corp continue to roam the field. The translation seems well done with sound effects translated as well. This chapter serves as a good set-up for the battles on the way which will likely take up the next few months of Toriko’s manga.

One Piece:
One Piece follows after Toriko with the Straw Hat pirates and the Marines finally finishing off the last of Caesar’s forces and his back-up. Now that these two teams have managed to put an end to this threat, they must plan their next move and try to sort out their differences. 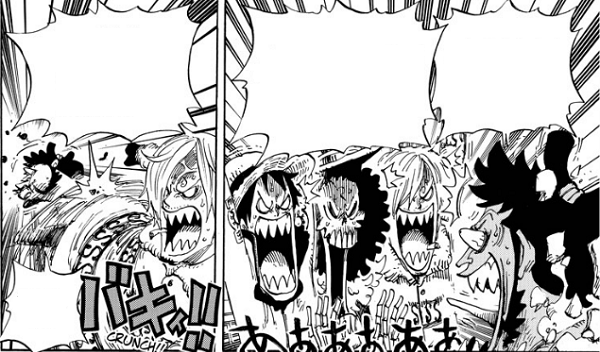 Chapter 696 focuses heavily on the after-math of this large arc as the split up members of Luffy’s crew finally come together now that the battle is done and begin to wind down. Not only do we see some of the series’ comedy return to One Piece in this chapter but a few previously unresolved issues are quickly fixed within only a couple of panels. This chapter crams a lot of detail and characters into one chapter and feels rather rushed as they try to tie up a few final plot points before revealing the next step in Luffy and Law’s plan.

Naruto:
The last chapter of Naruto saw the Ninja War reaching its peak as Neji, the first main side-character, killed off by a powerful attack from Obito. As Naruto begins powering up the army with the Kyuubi’s chakra his conviction towards defeating Obito and Madara has never been stronger and the army launches their strongest counter attack yet. 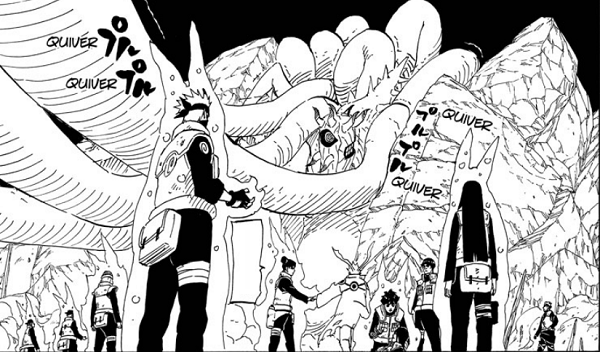 After last week’s emotional impact from Neji’s death, Naruto and his newly powered allies say their final goodbyes for Neji’s sacrifice and put into action the plan laid out by the HQ before it was destroyed. As such, this chapter mainly focuses on the massive Ninja army unleashing various attacks and restriction techniques to deal what may be the first actual damage to their enemies. Not only does this chapter focus heavily on emotion such as Lee’s final goodbye to Neji but it also features a number of powerful moves being unleashed, a number of which taking up a two-page spread as they slam into Obito and Madara. However it seems things are about to slow down significantly next chapter as the focus switches to Sasuke’s group.

Nisekoi:
After a few chapters of random pieces of story and character development spread across various slice-of-life rom-com events which have been quite funny, it seems that things are about to move into plot development territory. 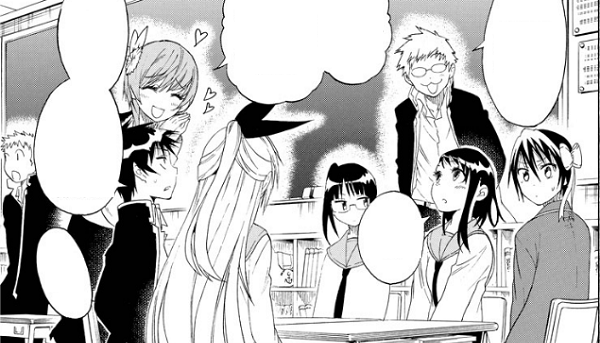 As the days have gone buy it is approaching Christmas time and while the gang is trying to sort out their Christmas plans and hold a party, Chitoge suddenly grows very concerned. It turns out that her mother is coming home to spend time with the family and if her opinion is anything to go by, Raku better straighten up and play the fake boyfriend part well or he’ll be at the wrong end of a vicious and powerful woman. The series always excels at offering hilarious slice-of-life comedy and over-the-top facial reactions and this chapter is unofruntalte light on both of those things. While it still offers a few laughs, the obvious focus here is set-up for an actual story-arc. As the story begins to move forward again, we’ll have to see how Raku handles Chitoge’s mother.

One-Punch Man:
This new manga certainly entered into things with a bang. Featuring a rather oddly drawn hero called One-Punch Man the hero took down a vicious looking demonic creature with only one blow after it managed to destroy a very large area.

Considering the fact that the series literally started last week, we’ve seen no backstory so far for what One-Punch Man is about and this second chapter looks to expand things by going back in time three years. In this chapter we see a new creature and even stranger character design that honestly looks terrible as the hero receives a little bit of backstory, but not enough to expand much of anything. As such, this chapter feels more like filler backstory than anything else which is disappointing in only the second chapter.

Bleach:
Last chapter it was revealed strongest warrior in the 13 Guard Squads of Soul Society isn’t quit who we thought it was as Kenpachi must now face off against a character in mortal combat that has done a complete about-face as far as personality is concerned, Unohana.

Would it be bad to say that it feels like this chapter was over in around thirty seconds? Well perhaps not, since this was certainly an easy translation job for Viz’s team with only a few text bubbles and the entirety of this chapter focuses on the intense combat between Unohana and Kenpachi as we learn that these two characters have quite a bit of backstory to them which will likely be revealed over the course of their life and death struggle to train Kenpachi into a stronger fighter.

Cross Manage:
The first match that the girls’ lacrosse team turned out to be quite difficult last chapter but through the team’s great teamwork and persevierence the girls have managed to push towards a victory in the first game of the lacrosse tournament. As such the team must work hard to aim towards another win. 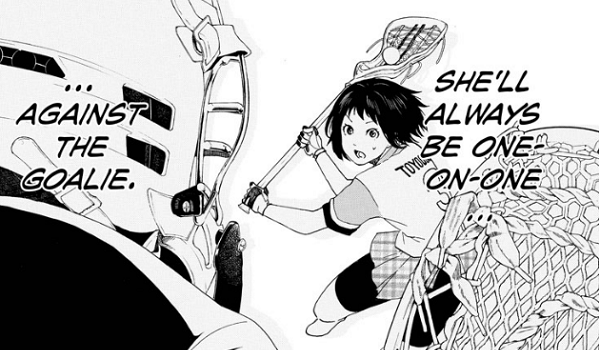 Sadly I’ll admit that I am unfamiliar with this series as a whole, but this chapter focuses on the girls’ second game while the manager Sakurai explains his team positioning to the Soccer Club manager and the woman who has a crush on him, Hayami. For those curious about the rules of lacrosse and some of the game’s positions this chapter serves well to explain a few situations while also exploring a bit of romance between the dense coach and the girl who admires him.  As far as artwork goes, some characters feature odd artwork but the lacrosse game itself and the rule explanation was handled well.

Kintoki:
This is quite the special issue because of one reason, it includes Kintoki. Kintoki is a one-shot (meaning one chapter only) manga from the famous Akira Toriyama known for the hit series Dragon Ball. As such, it is always huge news whenever he puts pen to paper again and now that he has, this thirty page story has been included in the latest Weekly Shonen Jump featuring a rather familiar looking art style reminiscent of his Dragon Ball days. 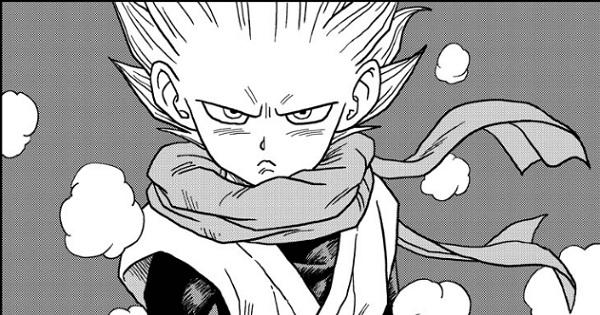 The story follows Toki, the last of the Kinme Clan, a group of people known for golden eyes and amazing combat abilities. He lives alone in the wilderness but when one of his visits to the closest town puts him at odds against a young lord, Toki must fight against his lackies and reveal his abilities. To say that this one-shot was full of nostalgia would be an understatement thanks to how similar many of the fighting sequences and appearance of the characters were to the iconic Dragon Ball manga. The story itself is also rather interesting and I could see it becoming a full blown series if Toriyama chooses to take the story beyond a simple one-shot.

Overall:
This second issue of Viz’s Weekly Shonen Jump keeps the pace moving rather fast with a number of action packed chapters mixed in with plot advancing chapters with only a couple in-between fillers. Unfortunately, One-Punch Man is floundering right off the bat, but that is made up for with the impressive battles found in Naruto and Bleach. Of course for those looking for more than action, Nisekoi continues to provide a few laughs while Cross Manage’s focus on the second game and rules of the game keeps the manga interesting.

Of course, any issue featuring the well-known Toriyama is already something special, but the story introduced in Kintoki could easily be taken to the next level. Ultimately this issue contained some rather impressive artwork and some good story development, though those looking for more of Toriyama’s work should keep an eye out for next week’s issue when the fully colored Dragon Ball Z manga chapters begin debuting.