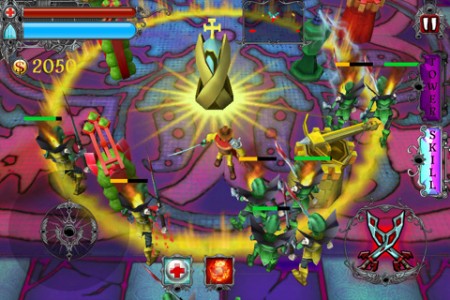 The iPhone device is infested with many cliché Tower Defence games, but among the piles of generic titles, every now and then a true gem shines and stands out amongst the rest. Enter Vampire Rush, a prime example of such a gem. Vampire Rush throws in a couple of Hack n’ Slash elements to mix up this Tower Defence title, and they all seem to work together quite well. At first glance it may look like just another iPhone game, but do not judge this book by its cover.Vampire Rush is a must play for all fans of the defence genre of gaming, as it is an addictive, enjoyable, solid game that has a great balance of difficulty and depth; not too deep but not too shallow and can appeal to gamers of all levels. 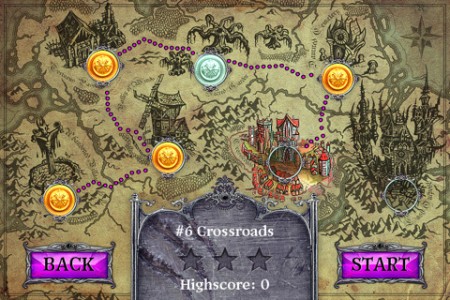 I think Mordor is on here somewhere…

Vampire Rush is presented is simply, yet effectively. The protagonist Captain Greg’s design is obviously influenced from the classic vampire hunter, Van Helsing but no complaints there! Although it should be noted many of them don’t even look like vampires, and there is no use of holy water, crosses, garlic or even stake knives, so there’s isn’t much vampire-istic elements to it at all. Yeah thats right, I said ‘vampire-istic’. Its a word now! Menu’s are easy to navigate and everything appears nicely, but it would’ve been nice to have the purchasable upgrades listed with names and descriptions, as first time players just buy whatever and hope for the best. It also would’ve been nice to see a stronger story element involved in Vampire Rush, but its no biggie here as it is obviously more focused on the gameplay than anything else. 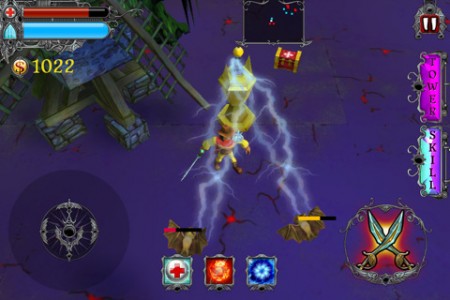 Players take control of Captain Greg, a vampire hunter who guards various castles as evil bad-guy vampires storm the gates attempting to infiltrate it. Good Ol’ Greg can earn cash by picking up various pick ups along the way, and can earn more cash further by killing vampires. As he runs around the outskirts of these castles, he can build various kinds of defence towers to fire at the enemies, and deciding the strategic placement of them is crucial in order to prevent wave after wave of enemies from breaking through. As well as building the towers, Greg can go in for close range combat himself with his trusty sword, adding a very basic hack n slash element to the game. It would’ve been nice to see this hack n slash element to be slightly deeper, but while it is simplistic, it is enough to keep the gameplay fun. Towers can also be upgraded in three stages, they go from Green, to yellow, to red, and so do the enemies. There is a significant difference between each upgrade, giving you your monies worth and adds to the tactics players will develop. On top of this you are given the option to upgrade Greg himself, with various skills such as fire and ice as well as speed, power and defensive upgrades. This repetitive age-old arcade action is simple and enjoyable, but the true joy behind this title is the stage designs which dramatically effect how the player will decide where to place their towers, and the constant upgrading of the towers to hold particular positions and upgrading Greg in order to survive melee combat gives a strong sense of strategy to the game making it more than just a ‘run here, kill that’ type of game. Addictive and fun, the constant wave of villains keeps players on their toes and the perfect balance of difficulty is spot on, constantly challenging and getting harder as it goes along but never seeming too impossible has been perfected here, which is what truly seals the deal with Vampire Rush, keeping the player on their toes and drawn into the gameplay. Lack of many other features or gameplay modes would’ve also been a nice addition, but sadly there’s just the short campaign and survival modes. 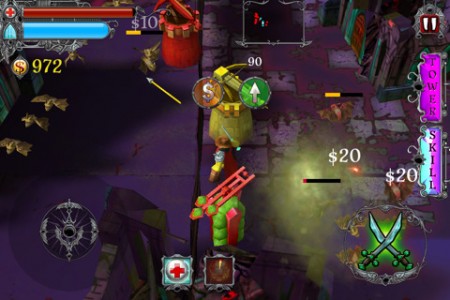 Vampire Rush makes use of interesting character design, that while a slightly generic, is presented brightly and is easily overlooked. The graphics themselves are smooth, much like the frame rate, and while is nothing outstanding, they do look good. Explosions look great. The soundtrack and sound effects compliment the graphics as they are equally as good, but the audio is let down by quite terrible voice acting, and even worse dialogue. It’s a shame that such a great game has such a boring character deign and model for it’s hero, with quite bad voice acting. 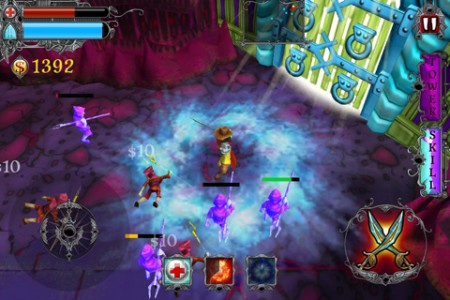 Vampire Rush is one of the better Tower Defence games I’ve played on the iPhone device. It’s simple, fun and to the point. Anyone can pick up and play it, but it’ll take practice to master it truly. This is a title that’ll probably be overlooked by many, but it shouldn’t, as Vampire Rush is neck-bittingly great! While a little simplistic, Vampire Rush is a pleasure to play and is really worth sinking your teeth into!

I give Vampire Rush