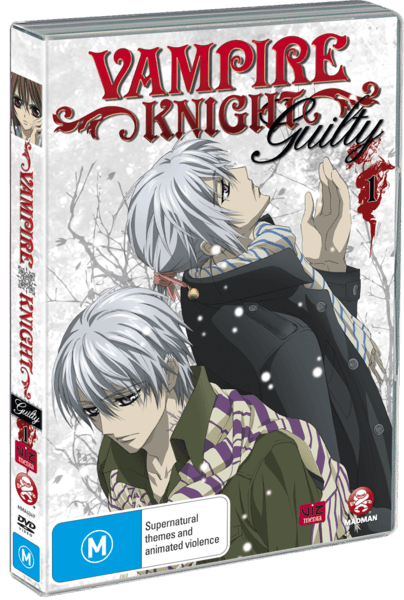 Overview:
Vampires have been depicted in countless different ways and everyone has their own idea of what a vampire should actually be like. They can be cruel and heartless beasts, or they can also be misunderstood creatures and have even been romanticized.

Such is the case in Vampire Knight Guilty, the second season of Vampire Knight where at the Cross Academy two classes exist. A day class and a Night class, but the Night class consists of vampire students. With the continuation of Vampire Knight’s story directly into Guilty, how will Yuki cope with the relationship triangle brewing from past season as well as the threat looming over both her friends and herself?

Story:
Vampire Knight Guilty begins just a few short weeks after the events of the first series. Zero returns to Cross Academy after his transformation into a Level E was prevented by Kaname’s blood during the last season. Yuki is happy to see Zero back but is still troubled by the fact that she does not have any memories of her past and Zero is concerned about Kaname’s blood inside of him.

The death of Shizuka in the previous season provides much of the plot in these four episodes as we learn more about what she was actually planning to do. With her death however many things begin to quickly move in the vampire world, including the fact that Zero is being hunted for the murder of Shizuka. 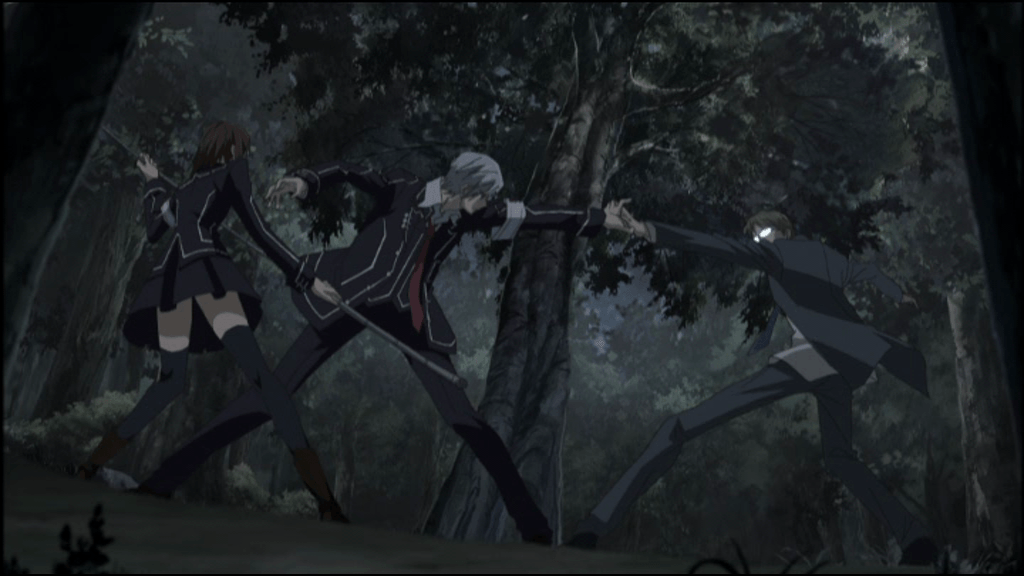 The inherent problem with Vampire Knight Guilty is the fact that it is a direct continuation of Vampire Knight, meaning that knowledge of the previous season is required to understand most, if not all, of what is going on at any given moment. This means that there is a bit of an entry level to Vampire Knight Guilty, though fans of the series should find absolutely no trouble picking up the story where it left off.

These first four episodes help develop the initial plot with a few flashbacks here and there but mostly focus on developing the love triangle involving Yuki, Zero and Kaname. The intensity level of the relationships between Yuki and Zero and Yuki and Kaname increase greatly. Romantic scenes occur often and end up becoming quite endearing at times, meaning that fans of romance novels or romance in general will find these first few episodes to their liking. There is also a decent amount of comedy mixed in with the drama but the comedy begins to dwindle as the foreshadowing of an imposing thread begins to loom over each character.

One thing that is a bit disappointing however is the fact that there are only four episodes on the first volume of Vampire Knight Guilty. The series will eventually culminate at thirteen episodes, which is the standard for most anime DVD releases nowadays. Madman did release Vampire Knight Guilty Volume 1 at a cheaper price than average but the limited content per purchase (there is no bonus content) is certainly going to hurt wallets when all three volumes finally are released.

Artwork:
The character designs for Vampire Knight Guilty have not changed at all since the first series which means you will immediately be able to recognize returning characters and the rest of the scenery around you. The character designs themselves are still a bit too exaggerated. This may sound a bit odd when criticizing an anime due to their usual exaggerated features but some characters’ eyes are quite large. Vampire Knight Guilty falls into the shōjo genre (meaning female audience) so this is something that one can expect, though perhaps not in such quantity. Take a look at Fruits Basket for example. 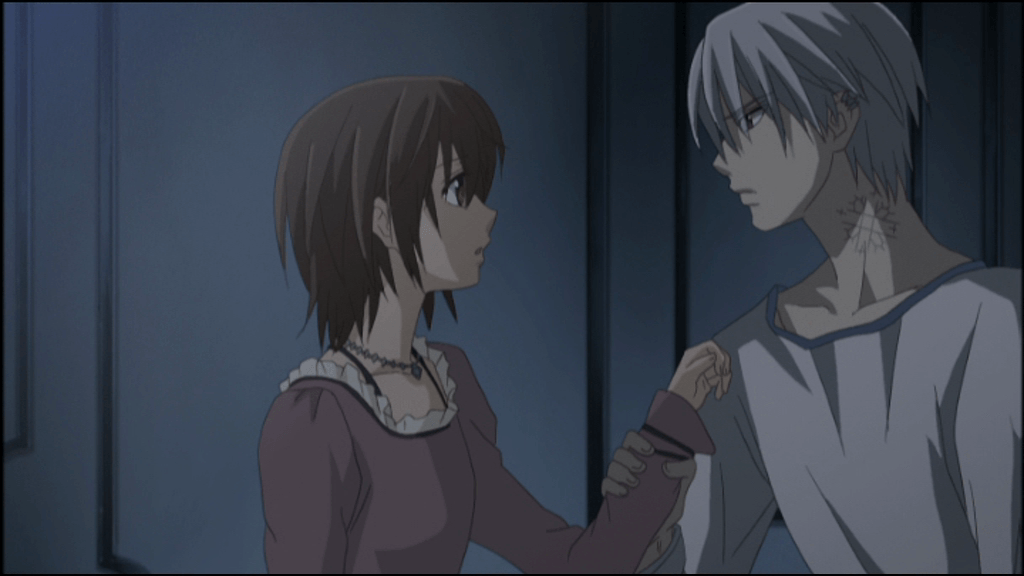 The environments are suitably eerie and help create the dark theme that the anime works towards creating. Besides the exaggerated facial features most of the characters appearances are quite close to reality and shading on the outfits and hairstyles was really well done in these first episodes. I didn’t find many issues with the character designs but there are some problems with the video itself, mainly revolving around poor quality. Scenes with action involved keep the same animation consistency throughout which is a definite plus. The opening video is enjoyable to watch though the ending song animation feels quite week, even for an ending video.

Audio:
Vampire Knight Guilty has both English and Japanese language options depending on which you prefer of course. The English cast fits well into their character’s roles and all voice actors have retained their jobs this time around so you will not be hearing any inconsistencies between Vampire Knight and Vampire Knight Guilty. Overall these voice actors were nice and consistent but I found myself unimpressed with their presentation. 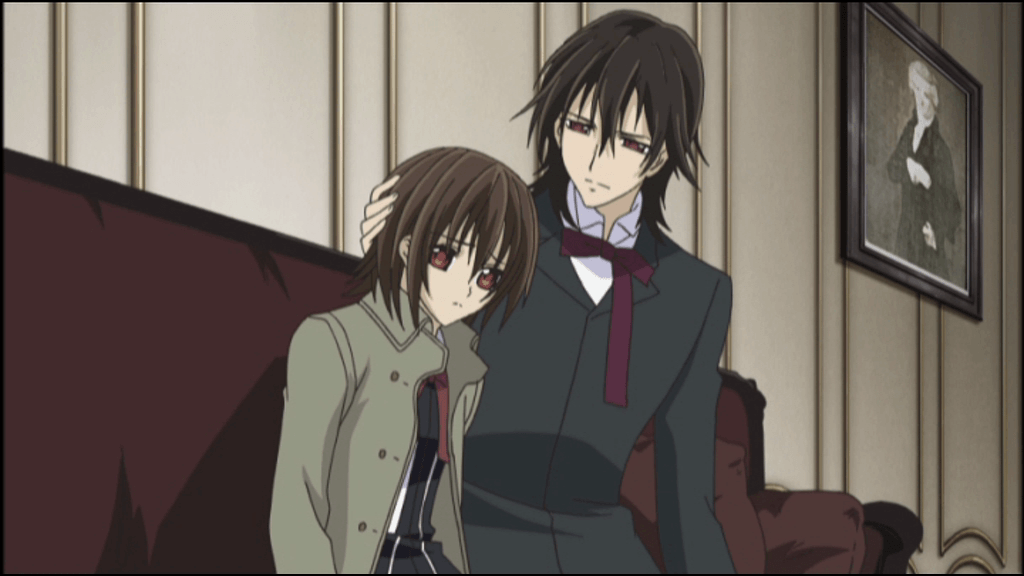 The opening song, “Rondo” by the band ON/OFF is enjoyable to listen to and matches the animation quite well. The yellow subtitles are a bit off putting unfortunately but being as the song is in Japanese; this is the only way most viewers will know what the lyrics to the song are. The ending theme “Suna no Oshiro” by Wakeshima Kanon is quite impressive and matches the theme of the anime well. The background music and sound effects help provide the dark and eerie feeling that the series tries to place over the love triangle focus.

Characters:
Yuki Cross is a fifteen year old student who is human and also a Guardian that is tasked with the job of protecting the vampire students’ secrets from reaching the human students in the day class. She is seeking a way to recover her lost memories. Yuki shares a long lasting love for Kaname but due to his vampiric nature it is difficult for her to approach him romantically. She also has fallen in love with Zero, and struggles with her feelings for both Zero and Kaname while both men share a hatred for one another. Her constant struggle with emotion will leave fans of both Zero and Kaname growing angry with her as her indecisiveness and naivete is an issue with the series.

Zero Kiryu is a close friend with Yuki. He became a vampire at a young age when his family was killed by a pureblooded vampire that also turned him. After the events of last season Zero has had to avoid capture and conflict with other vampires due to the charges leveled against him of killing Shizuka. His sudden return to the Cross Academy also brings the trouble that has been following him. His relationship with Kaname can be best described as strained due to the fact that Zero wishes to slay any pureblood vampire he meets.

Kaname Kuran is a pureblood vampire who is in love with Yuki. He saved Yuki when she was a young child from being attacked by another vampire. His true intentions for fostering feelings for Yuki have yet to be revealed but it is obvious through his actions that he is in a constant struggle to keep his emotions in check when he is around her.

Overall:
Vampire Knight Guilty is a great series for those looking for romance and action mixed together. These first four episodes are more of an introduction to what will be occurring further on in the series and with their focus on relationship development these episodes are certainly slow with development. The animation quality is rather impressive, if not a tad too shōjo for my liking. The main issue with Volume 1 is that the viewer will be left wanting more, but will need to buy the second volume. Also with being a direct continuation of the first season, it is highly recommended that viewers watch Vampire Knight before watching Vampire Knight Guilty.

I give Vampire Knight Guilty Volume 1: