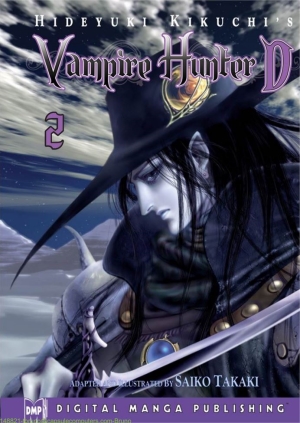 Overview
We recently reviewed the first volume of the Vampire Hunter D manga series right here, last week. The world that was initially established there continues on in Volume 2. How does the story hold up, though? What sort of folk and beast will ‘D’ be dealing with in this volume? Is the art as good or better as the last volume? Let’s find out.

Story
As the story opens, a group of townsfolk are bearing a coffin along the road, headed for a bridge. It’s revealed that the person in the coffin was bitten by a noble the night before. As the vampire hunter who’s present (not ‘D’) prepares to drive a stake through the heart of the coffin, a hand bursts forth, grasping onto the neck of the hunter. The villagers quickly dump it overboard with the vampire hunter and it sinks to the depths of the river. Even more shocking is the fact that all this takes place in the middle of the day, with the sun in full effect.

The story quickly jumps to the village of Tepes. We’re quickly shown that something very unusual is going on here. Ruins resides at the top of a hill just outside the town, but it is protected by intense magical defenses.

Lending to the eery feeling of the hill is a story that has plagued the town of Tepes for a decade. One day, four children went up the hill together. The children were gone without a trace. For a week, the town searched desperately for the children, but it was all for naught. Then, a week later, the children came traipsing down the hill. Only three of the four returned, and all three had no recollection of what had happened.

While the time frame is the same as volume 1, our protagonist, the dhampir vampire hunter who only refers to himself as ‘D’, finds himself in the employ of the mayor of Tepes, 10 years after the incident with the children. It’s his responsibility to track down the missing fourth child who never returned and destroy him.

As he begins his search, he soon runs into Lina. One of the children who’d gone missing a decade prior, she’s as sharp as a whip and labels herself as D’s assistant. Along the way, D also runs into the other two children who’d returned – Lucas Meyer, who’s become the town’s school teacher, and Cuore Jorshtern, who returned deranged and never recovered.

Throughout the volume ‘D’ has run-ins with the mysterious noble, usually also somehow involving one of the three survivors. The vampire, who covers his face with bandages and his face, is constantly giving ‘D’ and the townsfolk something to be concerned about at every turn.

Volume 2’s story is, overall, quite satisfying. There is a pervading sense of mystery that slowly has the veil lifted, shedding light on some quite interesting twists and turns along the way. The complete break of this storyline from Volume 1 feels like it was the best possible choice, granting much more freedom, not only for where this story went, but anything coming in the future as well. Part of the plot also reveals a few very juicy bits of D’s origin story as well, providing not only a good story in its own right, but continued character growth for our protagonist. There are a couple of story beats that feel like they cause some jarring transitions from one story point to another, but overall, this entry into the series is a solid one that earns it keep.

Artwork
The artwork in Volume 2 feels much more consistent overall than Volume 1’s artwork did. Characters feel like they are more deliberately drawn with their own unique characteristics, which lends credence to the visual style and setting.

The combat scenes in Volume 2 still feel plagues by the over-saturation of ink, though. A man clad in dark armor battling creatures of the night in black-and-white can make the situations a bit confusing, making it easy to lose focus on the flow of what’s happening. Apart from that, it feels as though Ms. Takaki is starting to find her groove with this entry, making it an overall more pleasant experience than Volume 1.

Extra Content
Folks who stick around beyond the main story will be treated to a short bit about the author’s struggle with weight gain as she drew Volume 2. She discusses the rise of Billy Blanks in Japanese culture and how she ultimately settled on a dance exercise routine known as “Turbo Jam.” After weeks of working out, she begins to see that she’s developing abs, but also keeps a bit of the flab around. It’s an amusing set of panels, and one that many western readers will likely get a kick out of given our lifestyle.

Overall
Overall, Vampire Hunter D Volume 2 is a solid entry to what feels like it could be a fantastic series. The story is quite well told, with many interesting twists and turns. The visuals feel better overall than Volume 1 did, but the action sequences still feel too busy. That said, anyone who enjoyed the first entry in the series or enjoyed the same content in other formats will have a great time working through Volume 2.